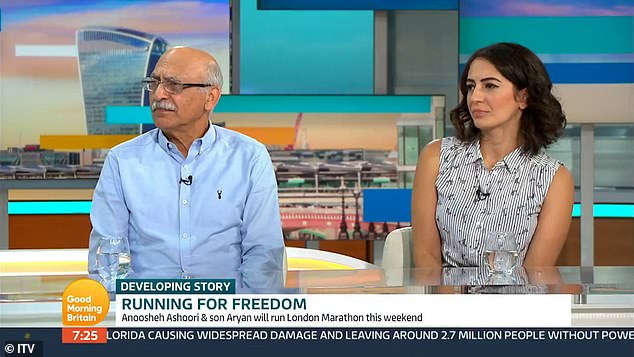 Anoosheh Ashoori, a British-Iranian businessman who was ultimately freed from an Iranian jail earlier this year, said it’s a “dream come true” to run freely as he trains for this weekend’s London Marathon.

Mr. Ashoori, 68, was imprisoned in Iran in 2007 while paying a visit to his mother and was charged with espionage, which he vehemently disputed. Prior to his release in March with Nazanin Zaghari-Ratcliffe, he was detained for over five years.

With his 32-year-old son Aryan, he will now run the marathon on Sunday in support of the “innocent people imprisoned in Iran’s jails.”

Just days before he runs the London Marathon to raise awareness of the prisoners he left behind, Anoosheh talked to Ben Shephard and Charlotte Hawkins, hosts of ITV’s Good Morning Britain, about how running gave him hope during his time in jail.

“It’s simply a dream realized,” I used to dream about how it would feel to be able to run about freely in places like Greenwich Park or the parks in London, but now I realize that it is becoming reality,” he remarked.

“Running helps you combat craziness,” he said, “and it helped me a lot.”

Five years ago, he admitted to the presenters with a chuckle that he wasn’t much of a runner. He added, “I had a huge beer belly.”

‘I encountered a group of folks who engaged in daily exercise after I was moved from the interrogation center to the main jail. We began doing these exercises when I requested if I may join them. These included some running.

“I ran for little under 10 minutes before I ran out of breath, but I persisted. Then it became twenty minutes, thirty minutes, and then one day I ran for two hours non-stop.”

He said, “I am now dedicating my race to the people of Iran.”

Since being released from Tehran’s Evin Prison, Mr. Ashoori has been advocating on behalf of those who are still in prison in Iran, such as trade unionist Mehran Raoof, 65, and Morad Tahbaz, 66, a dual citizen of the UK and the US who works to protect wildlife and has been imprisoned in Iran for more than four years on spying charges.

Mr. Tahbaz was recently granted a furlough from the Evin Prison, but he must wear an electronic ankle tag and might be sent back to prison at any moment. As previously stated, the Foreign, Commonwealth and Development Office and the United States are collaborating closely to attempt to obtain his permanent release.

Amnesty International stated that the detention of Tahbaz and Raoof, as well as Ashoori, Zaghari-Ratcliffe, and many other people in recent years, is a part of a “clear pattern” in which the Iranian government has brought bogus national security-related charges against foreign nationals and dual nationals in order to put pressure on other nations.

Mr. Ashoori said that he will persevere in order to take up the marathon’s challenge.

According to Mr. Ashoori, there are two golden principles for success: the first is to constantly remember that persistence pays off, and the second is to never forget the first. I will approach the London Marathon in that manner.

“After recent events in Iran, I have been humbled by the courage I have witnessed from Iranian women, as well as supporters who have marched to the streets to fight for their rights to protest and for freedom,” Aryan Ashoori said.

“I’m dedicating the run to the millions of people struggling for a brighter future, the innocent individuals imprisoned in Iran’s jails, and the many lives lost during these demonstrations.” Many thanks for your assistance. Humanity will triumph.

“Anoosheh’s suffering in Iran just ended a few months ago, so it’s incredible and very humbling that here he is pounding the streets of London to raise awareness of the predicament of Morad and Mehran,” said Sacha Deshmukh, Chief Executive of Amnesty International UK.

“This is another reminder to the Government that UK citizens are still suffering in captivity in Iran and that ministers need to start working with the families to have these individuals released and sent home as soon as possible.”

Everyone at Amnesty will be supporting Anoosheh and Aryan on Sunday, and we hope that onlookers and watchers at home will support their attempts to release Morad and Mehran.