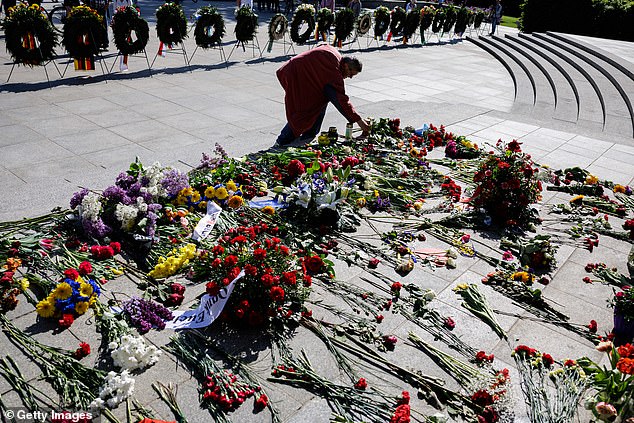 President Joe Biden and the western allies released a set of sweeping new sanctions on Sunday that target Russian media and bank executives, the latest financial crackdown to come in the wake of Vladimir Putin’s invasion of the Ukraine and one day ahead of the Russian president’s ‘Victory Day’ holiday.

During that meeting, G7 leaders agreed to follow the U.S. example and commit to phasing out or banning the import of Russian oil, the White House announced. The move will massively damage Putin’s ability to fund his war as energy is a main source of state revenue for Russia.

But it’s also unclear how long it will take to implement. G7 countries like Germany rely on Russia for a majority of its energy needs.

Sunday’s latest round of sanctions cut off Russian-state controlled TV stations from American advertisers and prohibit Russians from using US-provided management and accounting consulting services that have enriched oligarchs.

‘Taken together, today’s actions are a continuation of the systematic and methodical removal of Russia from the global financial and economic system. And the message is there will be no safe haven for the Russian economy if Putin’s invasion continues,’ a senior administration official told reporters on a briefing call.

Biden and western leaders have worked to hit Putin and his wealthy allies in their pocketbook, using financial pressure to try and end the war in the Ukraine by taking away its main sources of funding while, at the same time, puttin the squeeze on the Russian economy.

The White House claims the strategy is working.

‘As a result of our export controls, Russia is struggling to replenish its military weapons and equipment,’ the administration said in a statement on Sunday.

‘Almost 1,000 private sector companies have left Russia, and reports indicate that more than 200,000 Russians, many of whom are highly skilled, have fled the country. All of these costs will compound and intensify over time.’

The latest financial targets come ahead of Monday’s Victory Day celebration in Moscow, a major holiday that marks Russia’s World War II victory over the Nazis.

Some American officials are concerned Putin will use the day to officially declare war on Ukraine, which Russia invaded in February. The Russian president could also use the day to declare victory in eastern Ukraine.

US Ambassador to the United Nations Linda Thomas-Greenfield told CNN on Sunday that Russia has nothing to celebrate, noting it has ‘only succeeded in isolating themselves internationally and becoming a pariah state around the globe.’

All three stations have been among the largest recipients of foreign revenue, which feeds back to the Russian State’s revenue, the White House said.

The U.S. is also forbidding American financial executives from helping Russian oligarchs hid their money and build up their wealth.

The U.S. will also issue about 2,600 visa restrictions on Russian and Belarusian officials who the administration said were undermining Ukraine’s sovereignty.

And the Biden administration went after Russia’s banking industry.

The U.S. also sanctioned eight executives from Sberbank – the largest financial institution in Russia which holds about a third of all bank assets in Russia; twenty-seven executives from Gazprombank – a prominent Russian bank facilitating business by Russia’s Gazprom, one of the largest natural gas exporters in the world; and Moscow Industrial Bank and its ten subsidiaries.

Notably, legal services aren’t covered by the latest sanctions list but an senior administration official said they could be added at a later date if necessary.

Meanwhile, U.S. diplomats returned to Kyiv on Sunday to commemorate Victory in Europe Day with their Ukrainian counterparts.

But amid the celebration dozens of people were feared dead after a Russian airstrike leveled a school in eastern Ukraine on Saturday as the Russian bombardment continues.

Putin has been trying to advance in eastern Ukraine for the past few weeks, ramping up his push as Victory Day has approached. But Ukrainian forces – backed with weapons supplied by the U.S. and western allies – have fought back.

Separately, first lady Jill Biden and Canadian Prime Minister Justin Trudeau made visits to the Ukraine on Sunday to show their support for the people there.

Trudeau toured the northern town of Irpin, which had been heavily damaged by Russia´s attempt to take the capital of Kyiv at the start of the war. The mayor on Sunday posted images of Trudeau on social media, saying that the Canadian leader was shocked by the damage he saw at civilian homes.

Trudeau’s office later said ‘the prime minister is in Ukraine to meet with President Zelenskyy and reaffirm Canada´s unwavering support for the Ukrainian people.’

‘I wanted to come on Mother’s Day. I thought it was important to show the Ukrainian people that this war has to stop and this war has been brutal and that the people of the United States stand with the people of Ukraine,’ she said.

President Biden has requested more than $60 billion in aid for Ukraine this year.