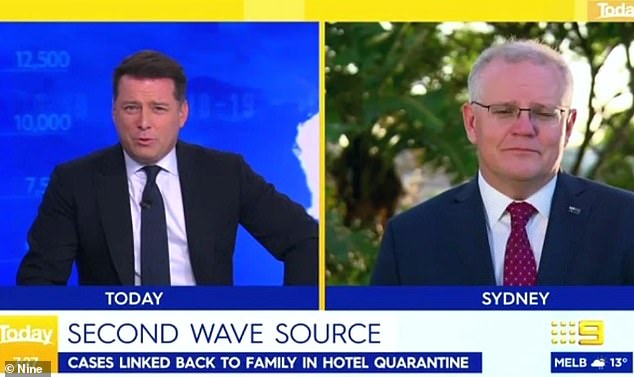 The Labor TV and radio advert, regarded as among the most effective of the election campaign, slams the Prime Minister for making mistakes and excuses over the past three years.

But the Liberals say the clips used were taken out of context and mashed together for dramatic effect.

They are so furious about the advert they have released a counter-ad – first seen by Daily Mail Australia – explaining why they think it’s so unfair.

The first clip showing Mr Morrison saying ‘that’s not my job’ is from a Today show interview with Karl Stefanovic and Allison Langdon on August 19, 2020.

Stefanovic asked: ‘Why haven’t you personally lost patience with Dan Andrews’ and the PM replied: ‘Because that’s not my job.’

Mr Morrison says the response was not an excuse but an explanation of why he was not criticising the Victoria premier over the state’s huge Covid outbreak.

The second clip is from a press conference in Queensland on October 11, 2020.

The Prime Minister was defending his policy allowing Aussies to access their superannuation early when he said: ‘I’m not going to go ar

In the third clip, the Prime Minister was being interviewed by Tara Brown on 60 Minutes on March 22, 2020.

Asked if he was frightened by the pandemic, he replied: ‘It’s not my job to do that’.

Coalition campaign spokesman Simon Birmingham claimed Labor has been ‘caught out lying to the Australian public’ by falsely implying the PM was making excuses for mistakes.

The advert, released on April 21, slammed Mr Morrison for his Hawaii holiday during the 2019 bushfires and blamed him for the slow Covid vaccine rollout and rapid test shortage.

‘Is it, is it my job to shout down the phone at a state premier while you’re trying to manage a pandemic?

‘No, I don’t think that’s a smart idea when we’re all trying to work together and get through the pandemic.’

A Labor spokesman said: ‘We make no apologies for highlighting the Prime Minister’s record because Australians know Scott Morrison has a problem with taking responsibility.

‘It’s a fact that Scott Morrison failed Australians when it came to quarantine, the vaccine rollout and ordering enough RATs.

‘Scott Morrison is more interested in spinning a story to make himself look good than taking responsibility for his failures that have cost Australians throughout this pandemic.’