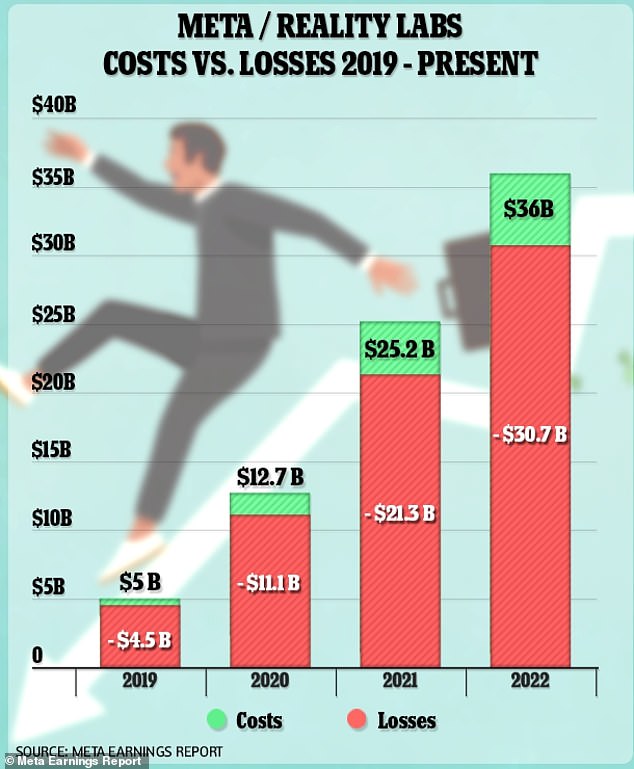 According to recent financial reports, Mark Zuckerberg has invested more than $36 billion on his failed Metaverse project since 2019. The CEO has since seen more than $30 billion of those investments vanish in a matter of months.

The unsettling data follow a discouraging financial report from the dominant social media platform, whose user base has been declining in recent years.

At the end of 2021, the famed 38-year-old Zuckerberg, who famously established Facebook as a Harvard freshman in 2004, had a net worth of $126 billion.

He only had a $38 billion net worth as of this past weekend.

The New York-born billionaire’s brisk investment into his virtual reality project, which has been mocked for its never-ending empty rooms and inability to draw users, has drawn new questions in light of the quarter’s underwhelming results.

Financial records reveal that the executive has primarily staked the future of his business on the sputtering technology, investing tens of billions of dollars in the expectation that it could attract users away from TikTok and other platforms.

Due to the fact that the venture has largely failed and resulted in losses that are crushing the company’s profits, Reality Labs, the division that houses Facebook’s and metaverse’s resident VR units, has racked up billions of dollars in debt.

In the fourth quarter of 2021, the same period that Reality Labs revealed its first-ever user decline, Meta started providing financial information for the firm.

The damning financial reports show that since financing for the Metaverse started in earnest in 2019, Reality Labs has lost a total of $30.7 billion in operational income. For the year, Reality Labs recorded $5.3 billion in sales.

Reality Labs reported an operating loss of $9.4 billion for the first nine months of 2022 alone in the company’s third-quarter earnings report, and top executives expect the losses to rise even higher as the project shows no signs of slowing down despite having encountered little to no success.

After the much awaited announcement of the figures, CFO David Wehner said, “We do estimate that Reality Labs operational losses in 2023 will climb dramatically year over year.”

The company’s new Quest VR headset, which was just released, and the impact of the first full-year salaries for employees hired in 2022 were cited by Zuckerberg as the “biggest drivers” of the losses and the alarming results, respectively.

The company’s Reality Labs business’s costs and expenditures for 2021 were $12.5 billion, according to the financial filings, even though the division only brought in $2.3 billion in revenue during that time.

The data strongly implies that investments for this year are likewise on course to surpass those for 2021, with laboratory expenditures and expenses rising to $10.8 billion during the first months of 2022, a period during which the division reported just $1.4 billion in sales.

Meta ascribed the reduced sales to the earlier this month’s introduction of the Quest 2 VR headset, which the business plans to make up for in the next months.

The third-quarter operating margin for Meta fell sharply this year, from 36% in 2021 to only 20% this year, as a result of the company’s now well-known spending binge, according to Wednesday’s results release.

Before accounting for the costs of taxes and interest, Zuckerberg’s company’s diminishing revenues were taken into account. At the end of 2021, Facebook was renamed Meta to represent the company’s drive into the “Metaverse.”

The business, which had over 3 billion monthly active users at one point, has subsequently struggled with the branding but anticipates Reality Labs operational losses to “increase dramatically year-over-year” in 2023.

Following this, Zuckerberg was made to shoulder the brunt of the tech industry’s alleged poor start, losing more than $88 billion in only a few short months.

Additionally, in the fourth quarter of 2021, Meta recorded its first-ever year-over-year sales drop, a trend that has continued this year.

Additionally, Meta’s stock price has fallen a staggering 70.5 percent year-to-date, to less than $100, a level not seen since early 2016.

According to FactSet, analysts were anticipating a profit of $1.90 per share on average.

When Meta reported in February that there had been no increase in monthly Facebook users, its stock price saw a record decrease, and Zuckerberg’s wealth was reduced by US$31 billion, one of the largest one-day worth losses in history.

The IT sector as a whole is now dealing with a number of difficulties as marketers reevaluate their spending in light of the impending recession and think of new methods to innovate in a field that has become somewhat stale in recent years.

According to Bloomberg, Meta is doing worse than its competitors. Its year-over-year decline is 57 percent, compared to 14 percent for Apple, 26 percent for Amazon, and 29 percent for Alphabet, the parent company of Google.

According to the CEO of Meta, who owns more than 350 million shares, almost all of Zuckerberg’s fortune is invested in the company’s stock.

With that stated, many of the company’s investors are believed to be worried about the CEO’s spending on the Metaverse, calling it excessively pricey for a concept that many still find perplexing and mostly unfinished.

In a letter to Meta CEO Mark Zuckerberg earlier this week, Brad Gerstner, the CEO of Meta shareholder Altimeter Capital, said that the company had “drifted into the region of excess” and had “too many employees, too many ideas, and too little urgency.”

As development is quick and simple, this lack of concentration and fitness is hidden, but it becomes fatal when growth slows and technology advances, according to Gerstner.

Additionally, according to Meta and Zuckerberg, revenues would continue to shrink throughout the current quarter, therefore proving that the downturn would be a pattern rather than an exception.

Zuckerberg stated in a statement that “the foundations are there for a return to greater revenue growth, even if we face near-term headwinds on revenue.”

In the announcement, it was said that “we are approaching 2023 with a focus on priority and efficiency that will enable us negotiate the present situation and emerge an even stronger organization.”

Meta also said that, in contrast to last year’s double-digit employee increase, it anticipates personnel levels to remain around the same as in the current quarter.

As of September 30, the corporation employed roughly 87,000 people, a 28% increase from the previous year.