Skip to content
Go Home «» News «» Breaking News «» Zion Williamson scores a career-high 43 points in the victory, including 14 of the Pelicans’ final 16 points 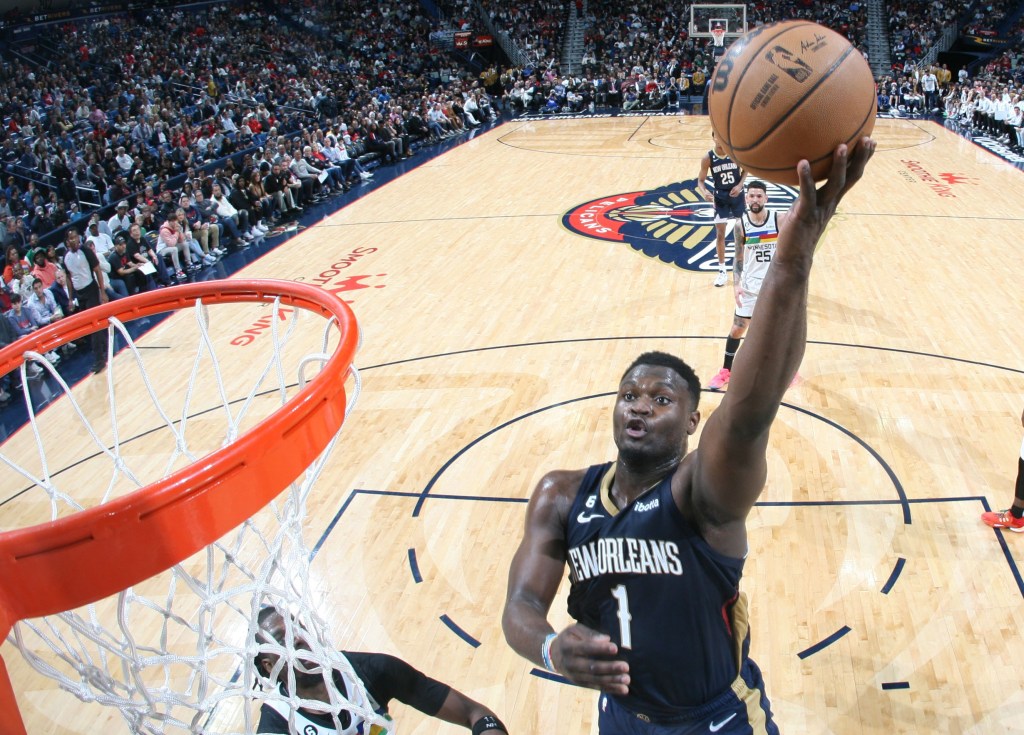 NEW ORLEANS — Zion Williamson dove and grinned as his New Orleans Pelicans teammates poured water over him in celebration. Moments later, Trey Muprhy III pretended to place a crown on Williamson’s head — a fitting gesture after a memorable game which, by the end, had coronation-type energy about it.

The 22-year-old Williamson scored a career-high 43 points, capping it with New Orleans’ final 14 points in the last 2:44 of the game, and the Pelicans outlasted the Minnesota Timberwolves 119-118 on Wednesday night for their fourth straight victory.

“People remember winners,” said Williamson, who is 22 years old. “When you consider some of the greatest athletes of all time, the first thing that comes to mind is championships and how they performed under pressure. And this is how I wish to be remembered: as a victor.

“I cannot simply state that I want to win. Williamson also acknowledged teammate CJ McCollum’s encouragement in the final minutes.

“CJ looked at me and said, ‘If you want to be great, now is your chance,'”

Anthony Edwards, who scored 27 for Minnesota, missed a baseline fade for the win as time expired on a game in which the Wolves led most of the way, and by as many as 11 points, before losing their fourth straight.

Zion Williamson, who scored 43 points during the Pelicans’ victory, attempts a layup.

Minnesota coach Chris Finch lamented his team’s defense on Williamson in the second half that was “way too soft.”

“We let him come running at us, and he was able to get a head of steam,” Finch said. “When he does that, it’s tough.”

Williamson’s 3-pointer with 2:17 left, assisted by more usual perimeter threat Murphy, cut Minnesota’s lead to 112-110. Williamson then pulled out of a spinning dribble in the lane for a short floater that tied it.

“We really had diverse play-calling down the stretch,” a smiling McCollum deadpanned. “Get the ball to Z and get the (expletive) out of the way.”

Williamson tied it again at 114 on a driving finger roll. And after Jaden McDaniels’ free throws put Minnesota back up with 1:04 left, Williamson hit a contested, off-balance, driving layup to tie it before stepping up to tip a bounce pass away from McDaniels and convert the steal into a go-ahead, breakaway dunk that had a sellout crowd in a frenzy.

“That’s just who he is; he understands time, score, situations. He understands the moment. And he made big plays after big plays,” coach Willie Green said. “That’s what great players do.”

Edwards’ dunk tied it at 118 before Williamson hit one of two free throws, which turned out to be enough.

Zion Williamson is doused with water by teammates after his 43-point night led the Pelicans to a 119-118 win over the Timberwolves.

Murphy scored 21, going 5 of 6 from 3, and McCollum scored 20 for the Pelicans. Jonas Valanciunas had 12 points and 11 rebounds.

D’Angelo Russell had 27 points and McDaniels scored 19 for Minnesota.

“There were a lot of good things we did in the game,” Russell said. “We did everything we could and battled. We tried to give ourselves a chance at the end of the game and that’s all you can ask for.”

The game was marked by physical play and flaring emotions.

There were 52 total fouls called, including a half-dozen technical fouls and one flagrant foul on each team.

“An emotional game, a chippy game, but this is good,” Green said. “It builds our character. It’s great to be on the winning side.”

Austin Rivers, who wound up fouling out with nearly 8 minutes left, was assessed a flagrant-1 foul after he caught Larry Nance Jr. hard in the head with a forearm late in the third quarter. Nance went to the locker room and was ruled out for the remainder of the game with neck spasms.

Rivers, a 2012 New Orleans first-round draft choice along with Anthony Davis, also exchanged shoves with Valanciunas. Double technicals were called and an additional technical was called on New Orleans’ Naji Marshall for pushing Timberwolves center Rudy Gobert as he stepped between Valanciunas and Rivers.

Minnesota took a 50-39 lead after a 9-0 run ignited by Russell’s 3 and fueled by McDaniels’ layup and putback in the second quarter.

Back-to-back dunks by Williamson and Murphy helped the Pelicans trim it to 52-49 before Naz Reid’s 3 made it 55-49 at halftime.

»Zion Williamson scores a career-high 43 points in the victory, including 14 of the Pelicans’ final 16 points«