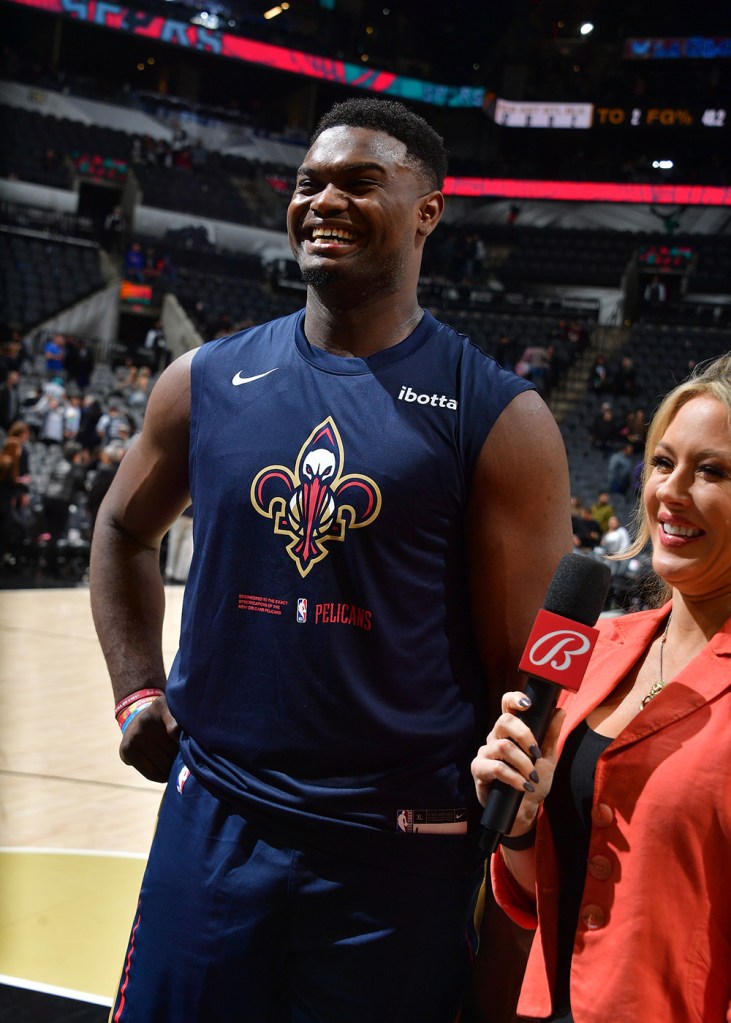 After hitting a double-double in a 129-110 victory over the Spurs, Williamson refused to disclose his favorite Thanksgiving meal to avoid social media trolling.

“You’re trying to set me up,” he joked to Bally Sports’ Jen Hale. “No matter what response I give, social media will make fun of me. So no remark.”

“You’re trying to set me up; whichever I respond, social media will make fun of me.” So no remark.”

Williamson said, “It’s all love,” and wished the reporter a good Thanksgiving.

Williamson did not provide any information, but he has discussed the impact that outside criticisms of his weight have had on him.

Williamson missed the whole 2021-22 season while recuperating from a right foot injury that was surgically repaired. During this period, the Duke product’s changing weight became a common topic of discussion among media pundits and the punchline of nasty social media jokes.

Zion Williamson conducts an interview following the Pelicans’ game against the Spurs on November 23, 2022 at the AT&T Center in San Antonio, Texas.

Williamson told FOX Sports earlier this month, “What people don’t realize is, even the journalists and whatnot, if they have children of their own, imagine if somebody talked about their child the way they talked about mine.”

“Criticizing my physique and my appearance. Every time they discussed me, they only mentioned my weight and how awful I looked. I don’t believe they were really aware of the impact that may have on you.”

Williamson signed a five-year, $193 million rookie maximum contract with up to $231 million in incentives in July. Nola.com reported at the time that there is a weight-related de-escalation provision in Williamson’s contract, which involves quarterly weigh-ins and states that his weight and body fat percentage must be below a combined 295 pounds.

Zion Williamson, a power forward for the Pelicans, drives to the basket against the Spurs on November 23, 2022 at the AT&T Center in San Antonio, Texas.

On November 23, 2022, in San Antonio, Texas, Pelicans power forward Zion Williamson will face the Spurs at the AT&T Center.

This season, the 22-year-old, who is listed on the NBA’s website as 6-foot-6 and 284 pounds, returned to training camp with a substantially slimmer physique.

»Zion Williamson remains silent on his favorite Thanksgiving dish: “Social media is going to make a fool of me.”«