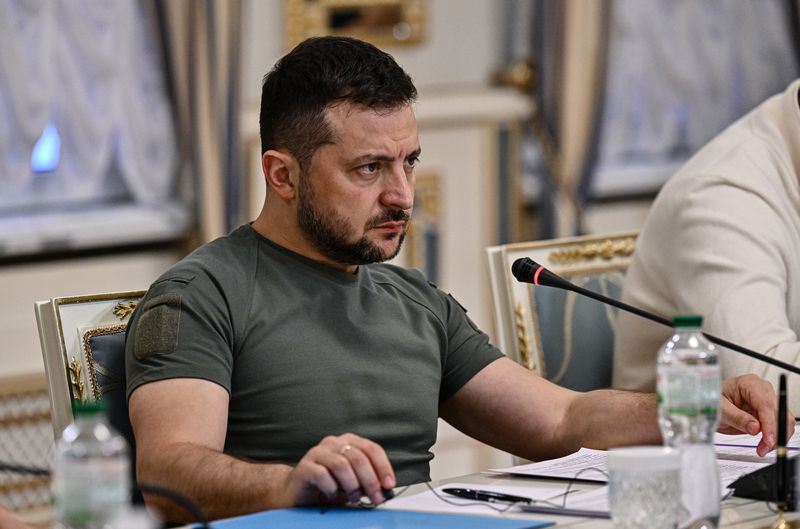 President Volodymyr Zelensky has stated that Ukrainian forces defending Bakhmut and Soledar in the east will be equipped with everything necessary to repel Russian forces in some of the fiercest engagements of the conflict.

This week, Russian mercenaries claimed to have captured the now-battered industrial towns in the east, which Kyiv stated were being defended by Ukrainian soldiers.

Friday at 20:00 GMT, the United Nations Security Council was scheduled to meet to address the situation in Ukraine.

After nearly a year of battle, the Kremlin has made taking Bakhmut — and Soledar with it — its major target, having been forced to forgo more ambitious objectives such as seizing the capital of Kiev.

“I want to emphasize that the units defending these cities will be supplied with ammunition and everything else they need on time and without interruption,” Zelensky said Thursday in a statement following a meeting with top military commanders.

Earlier, Ukraine’s Deputy Minister of Defense Ganna Malyar described the battle for Soledar as “the fiercest and heaviest” of the war.

“Despite the difficult circumstances, Ukrainian soldiers continue to fight,” she continued.

Wagner, a Russian mercenary organization, asserted early on Wednesday that its forces had occupied Soledar. However, the Russian defense ministry stated that fighting was still underway, and the Ukrainian government denied a full takeover.

Thursday’s military maps published by the Russian Ministry of Defense did not depict Soledar under the hands of Moscow’s regular army.

Also see: Russian soldier sentenced to five years in prison for refusing to fight in Ukraine

There is much work ahead.
Andrey Baevsky, a Russia-installed official in Donetsk, stated that there were still “small pockets of resistance” from Ukraine within the city, despite the fact that Russian-backed troops had almost complete control.

Both sides have suffered huge losses in the battle for Soledar and the bigger nearby town of Bakhmut, which is crucial to Russia’s plan to seize Donetsk from Ukraine.

Thursday, the Kremlin lauded the “heroic” efforts of Russian forces to capture eastern Donetsk from Ukraine and other fronts.

Dmitry Peskov, a spokesman for the Kremlin, stated, “Huge work has been accomplished in Soledar, as well as absolutely selfless heroic deeds, and not just in Soledar.”

“There is still much work to be done. “The bulk of the work is still to come,” he added.

Moscow on Wednesday announced a dramatic military restructuring, placing General Staff Chief Valery Gerasimov in control of its operations in Ukraine, coinciding with the struggle for Soledar.

Under the condition of anonymity, a Moscow-based defense analyst described the move to AFP as “unprecedented” and a sign of “very serious problems” on the battlefield.

This has not occurred since Marshal Georgy Zhukov was ordered to command the front in 1941.

Oleg Salyukov, the leader of Russia’s ground troops, was appointed deputy commander of Russia’s military campaign in Ukraine as part of Wednesday’s appointments.

According to the Russian defense ministry, he inspected a regional unit stationed in Moscow’s ally Belarus on Thursday.

When Russia invaded Ukraine in February, Belarus permitted Russian forces stationed on its territory to move into Ukraine via its territory.

Russia aims to regain control of the Donetsk area, which it claimed to have seized last year despite not having total control.

The battle in Ukraine has become characterized by the employment of drones ranging from small commercially accessible versions to larger aircraft, with both sides attempting to outmaneuver one another.

“Both the Russians and the Ukrainians are now publicly stating that there are portions of the front where their military drones cannot operate and where their commercial drones can be jammed and rendered inoperable,” said Pentagon press secretary Brigadier General Pat Ryder.

Observers have stated that Soledar, a salt-mining town with an estimated pre-war population of over 10,000, is of little strategic significance.

After months of humiliating combat setbacks, Russia would be able to sell a much-needed win at home if it could conquer the fort.

Russian military analyst Anatoly Khramchikhin told AFP, “Any victory is significant, especially since it’s been a while since we’ve seen one.”

One of the few remaining physicians in Bakhmut, which has been bombarded daily for months by Russian forces attempting to seize it, told AFP she was determined to stay.

“I took the Hippocratic oath when I enrolled in medical school, and I cannot betray these people,” stated Elena Molchanova.

As long as they remain, I will remain.

In addition to giving meager medical supplies to the last 8,000 people of the war-ravaged city, she also handed them death certificates.