They commended the NYSC Director-General, Brigadier General Shuaibu Ibrahim for his open door policy and giant strides in transformating the Scheme since he assumed duty.

Speaking through the leader of Yoruba Youth Council, Mr Adeyeye Olugbenga during a courtesy visit to NYSC National Directorate Headquarters in Abuja today, the groups said the Scheme has been an enabler of youth development with different activities that would enhance self reliance among Corps Members.

“We are here to appreciate you for the impact you have made on Nigerian youths regardless of tribal and religious differences”.

“All of us are supposed to come together and think on how to enhance the operations of the Scheme”.

Breaking:  Photographers at Afrika Konnekt News Network (AKNN)
Adeleye promised to advocate for the continuity of the NYSC Scheme, so that it can positively affect more lives with Government’s attention.
NYSC Director-General, Brigadier General Shuaibu Ibrahim in his response said the Scheme was established for the promotion of National Unity and Integration.

He added that Corps Members are agents of change and peaceful co-existence in their various place of Primary Assignments.

He said the NYSC Scheme introduced Skill Acquisition and Entrepreneurship Development Programme into its Orientation Course Content in order to empower Corps Members with vocational skills that would make them business owners.

The DG added that “Corps Members that acquire these skills and are very serious do get loans from the Bank of Industry, Access Bank, NYSC Foundation, Central Bank of Nigeria, Unity Bank among others”.

“NYSC was established to promote National Unity and integration”.
“We can’t pursue integration alone without skills, with integration, there would be unity, with unity, there would be peace, and when there is peace, there would be development”.
He appealed for the establishment of NYSC Trust Fund where all Corps Members that are Passing-Out would be enabled to access start-up capital to start their business vocations

“Help us to also educate Nigerians to support our cause so that Corps Members would be more comfortable during the Orientation Course and also help to maintain the facilities at the Orientation Camp”.

Breaking:  Maintenance Manager at Blue Seal Energy Group – Lagos & Rivers
“Use the Social Media to promote national unity and integration. Use the Social Media wisely, avoid cyber crimes, avoid the use of hard drugs among other vices “.
“Let the spirit of NYSC live in you, and continue to propagate the message of unity of our country”, he said.
During the visit, souvenirs were presented by the three youth groups to the Director-General, while he also reciprocated the kind gesture. 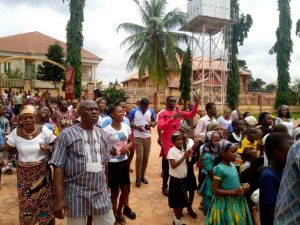 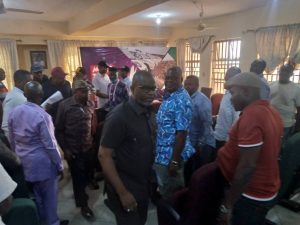