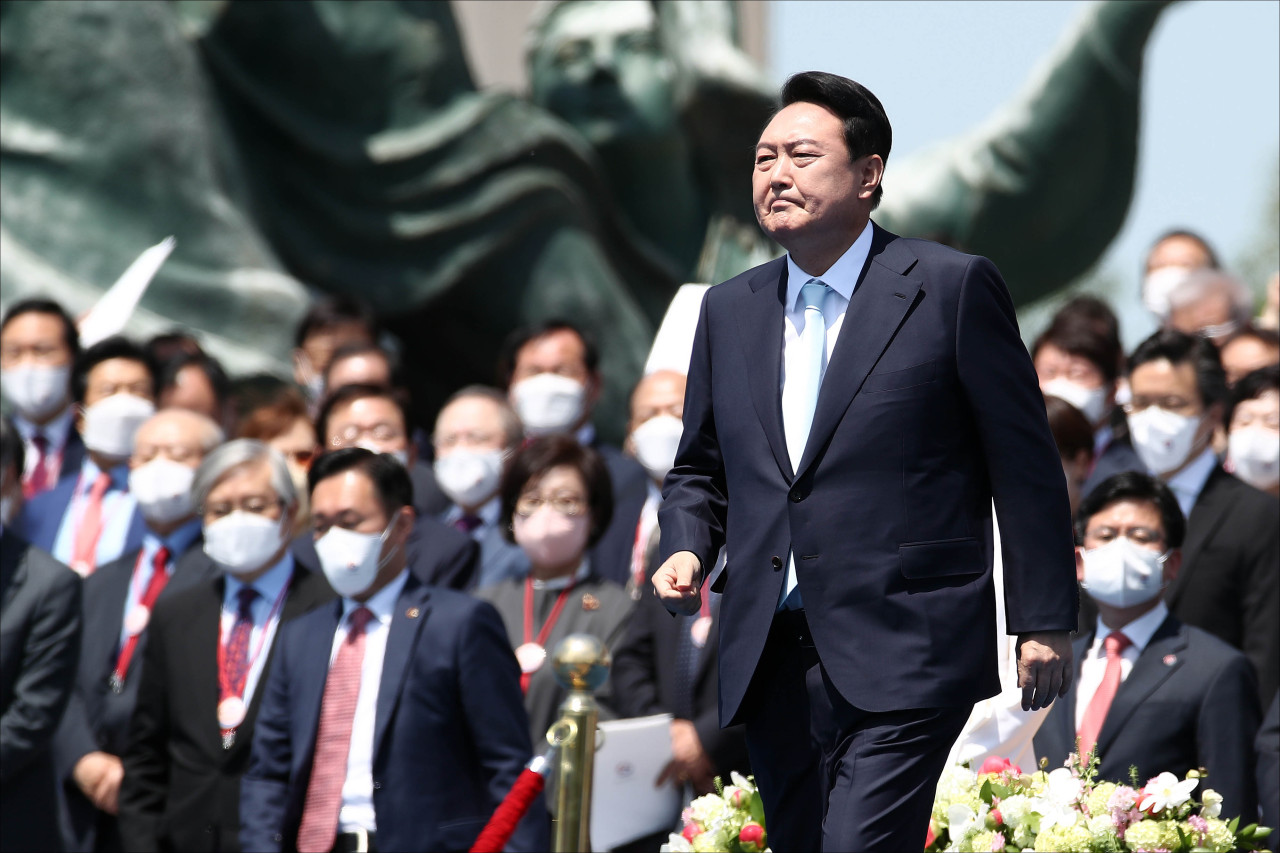 As a conservative, Yoon has presented a foreign policy that would reorient the country to developing closer ties with the United States, and take a hard-line approach in dealing with North Korea and its missile provocations — shifting the course from the one that his liberal predecessor, Moon Jae-in, took in broad terms.

But he would need to set strong and detailed principles to handle the challenges ahead. One of the greatest being striking a balance between the United States and China — the former, South Korea’s key military ally and the latter, its biggest trading partner, experts said.

The strategic competition between the United States and China is escalating to a zero-sum game, and South Korea would likely be pressured to take sides, just as other countries would be, Park Won-gon, a professor of North Korean studies at Ewha Womans University told The Korea Herald.

“Former President Moon Jae-in took a ‘strategic’ stance (toward the US and China), but that approach is too difficult to work. (Yoon) will face a situation where he would have to make a decision to take one side,” Park said.

Yoon would have to deal with the unfavorable consequences that would likely follow and should lay down a strategy ahead of time to make a decision, Park said.

The increasing security threats from North Korea also stand as a major problem the new president has to tackle.

In addition to the usual vitriolic attacks against South Korean presidents, Pyongyang has been ramping up testing of nuclear arsenals, having already launched its 15th missile this year.

In his inauguration speech on Tuesday, Yoon underscored the importance of maintaining “sustainable peace,” and called for North Korea to return to the negotiating table for denuclearization, while promising the reclusive regime economic improvements.

“While North Korea’s nuclear weapon programs are a threat not only to our security and that of Northeast Asia, the door to dialogue will remain open so that we can peacefully resolve this threat,” Yoon said during the inauguration ceremony held in the National Assembly compound.

“If North Korea genuinely embarks on a process to complete denuclearization, we are prepared to work with the international community to present an audacious plan that will vastly strengthen North Korea’s economy and improve the quality of life for its people.”

While there are speculations that Pyongyang is ramping up its missile provocations in protest to the advent of a more hawkish government in Seoul, Park, the professor, ruled out those claims.

The series of military actions Pyongyang conducted is only part of its plan to advance into a nuclear state, and this would present a very difficult problem for the Yoon administration to handle, Park said.

Cheong Seong-chang, director of the Center for North Korean Studies at Sejong Institute, also said there is “zero” chance that North Korea would accept Yoon’s proposal of denuclearization in trade for economic benefits, because the reclusive regime has long demanded that Seoul withdraw “hostile” North Korean policies, and to stop joint military exercises with the United States.

Pyongyang’s ratcheting up of its nuclear ambitions this year is seen from not only the increased number of test firing — the regime conducted four tests in 2020 and eight in 2021 — but also signs that it is preparing to conduct its seventh nuclear test.

According to US military and intelligence agencies, North Korea may conduct an underground nuclear testing this month as assessed from a commercial satellite imagery of the Punggye-ri nuclear test site.

The nuclear test could be carried out around the time US President Joe Biden visits Seoul and Tokyo later this month, and it would be the first in nearly five years.

What also adds to the tension on the Korean Peninsula is that, not only did the North launch what is believed to be an intercontinental ballistic missile thought to be capable of hitting the mainland US, but also it tested what it revealed as a “new type of tactical guided weapons system,” a strategic weapon that would pose as a direct threat to Seoul.

As the conservative president is making efforts to bolster alliance with the United States, in part to deter the North’s nuclear advancement, Yoon’s office is also tasked with reviving the long-strained relationship with Japan.

While South Korea’s relationship with the neighboring country often experiences cyclical ups and downs, it has been at a historical low, as the former Moon Jae-in administration clashed with Japan over a series of issues stemming from their shared history.

Compared to the other issues, resetting the fraught ties might be an easier task for Yoon, Park of Ewha Womans University said, as both leaders of the two countries have shown a determination.

Arriving early on Monday, Hayashi had a dinner meeting with Rep. Park Jin, Korea’s foreign minister nominee who is awaiting confirmation from the National Assembly, to discuss ways to improve the bilateral relations.

There, Park and Hayashi agreed to quickly push for carrying out high-ranking official meetings to resolve differences between the countries on a plethora of issues, such as the South Korean court ruling ordering a Japanese company to compensate Koreans for forced labor during the Japanese colonial period.