Skip to content
Home » News » News » Yathalia Manor: Inside the Adelaide home on sale for a whopping $12million 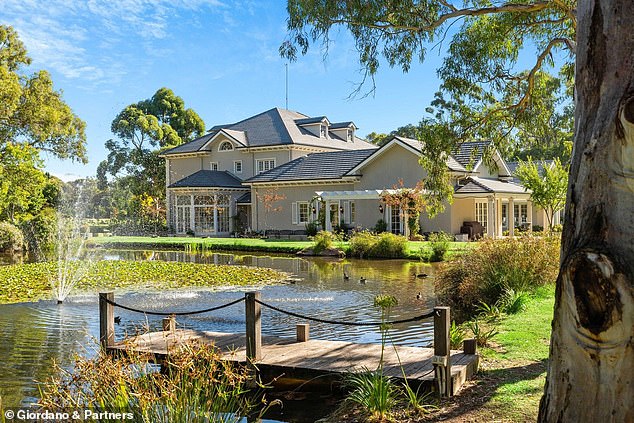 A luxurious Adelaide home with its own private lake, hangar, cinema and library is on sale for an eye-watering $12million.

The 2.6-hectare block in Yatala Vale, 17km northeast of the city, was empty in 2004 when Lorelai and Gary Williams snapped it up for $610,000 to build their dream home.

Over the following 18 years, the South Australian couple constructed a two-storey mansion and called it Yathalia Manor – which is now worth four times what the average Australian earns in a lifetime.

The palatial abode doubles as a wedding venue and incorporates Romanesque and French Provincial architecture with an enormous 2,271-square-metres of internal living space.

Yathalia Manor (pictured) was built by a South Australian couple, and features a duck pond, fountain and waterfall

Yathalia Manor (pictured) was built by a South Australian couple, and features a duck pond, fountain and waterfall

Surrounded by green vistas, vegetable gardens, animal enclosures, and a duck pond with its own fountain and waterfall, the sprawling estate also has an arts and crafts room, theatre, professional kitchen, and an elevator.

The first floor alone boasts a music studio, games room with an in-built bar, cinema with stadium seating, panelled library, a gym, and a secret room hidden behind a bookcase.

A spiral staircase winds up to the second floor, which has a master bedroom the size of a studio apartment, and five additional sleeping quarters – four with private ensuites.

Large, colonial-style windows bring an abundance of natural light, and each part of the home overlooks a different section of the manicured grounds.

The couple bought the vacant block for $610,000 in 2004 and transformed it into a luxurious wedding venue

The couple bought the vacant block for $610,000 in 2004 and transformed it into a luxurious wedding venue

A spiral staircase leads to six bedrooms – five of which have ensuites. The house also has a secret room hidden behind a bookcase

A spiral staircase leads to six bedrooms – five of which have ensuites. The house also has a secret room hidden behind a bookcase

While Mr and Mrs Williams live in Yathalia Manor, they also hire it out for weddings, photoshoots, and weekend pamper packages which include accommodation, massages, champagne, picnic baskets, and face masks.

Mrs Williams told Daily Mail Australia she is sad to sell the estate, but tragic family circumstances left her with little choice.

‘My parents, who have recently moved from remote Victoria to Murray Bridge, are going to require progressively more help and time with their health issues that range from cancer to dementia,’ she said.

‘We will start again building a new dream home somewhere in the Adelaide Hills area between Murray Bridge and Yatahlia – somewhere where I can be available to help my parents, children and eight grandchildren.’

While she makes plans for a new build, Mr Williams will focus on his passion – teaching people to fly planes from his flying school, Rotor-Sport.

The couple hope that whoever buys the property will continue renting it out for weddings.