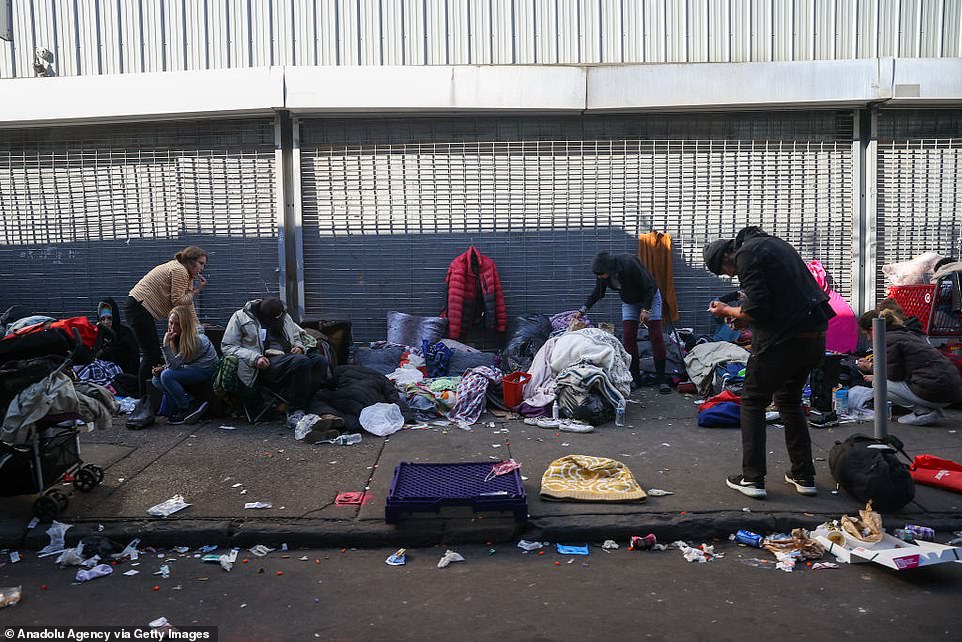 Health experts are warning of a deadly flesh-eating chemical that is increasingly being laced into heroin, cocaine, and other opiates, resulting in a nationwide increase in drug overdoses.

Doctors report that Xylazine, a muscle relaxant intended for large animals such as horses, has entered the illicit drug market in cities across the United States, joining fentanyl as one of the principal narcotics utilized to cut opioids.

The drug prolongs the highs associated with heroin, but causes users to pass out for hours as injection sites ulcerate and lead to the spread of gruesome wounds.

Some users describe serious sores appearing in areas where they never injected the drug, and many are left disfigured after having to amputate fingers, limbs, legs, and toes.

Sam Brennan, a 28-year-old female user from Philadelphia, told Vice, “It’s eating away at my flesh.”

In Philadelphia, the epicenter of the Xylazine issue, about one-third of all fatal opioid overdoses in 2019 were attributable to the medication.

However, because Xylazine is not an opioid, experts warn that many hospitals do not know what they are seeing when an overdose victim is brought in, cannot identify it in testing, and are unable to treat patients as they would normal opioid overdoses.

Health experts are warning of a deadly flesh-eating chemical that is increasingly being laced into heroin, cocaine, and other opiates, resulting in a nationwide increase in drug overdoses.

A severe skin lesion brought on by Xylazine. Users frequently compound the issue by injecting the analgesic into their infected wounds.

In 2015, Xylazine was responsible for only 0.36 percent of all fatal overdoses, according to a Drug and Alcohol Dependence research conducted in ten locations. By 2020, however, that percentage had increased to 6.7%.

The findings are particularly astounding in Philadelphia, where 2% of fatal opioid overdoses occurred between 2010 and 2015, then exploded to 31% in 2019.

Since 2019, studies in Michigan indicate at least 200 Xylazine-related fatalities. In Connecticut, it contributed to at least 10 percent of all overdose deaths in 2020, and 19 percent in Maryland in 2021.

The rising prevalence of Xylazine is eerily similar to that of fentanyl in the United States, which has risen from relative obscurity to dominate overdose statistics in the previous decade. According to the National Institute on Drug Abuse, deaths attributable to fentanyl increased from 14.3% in 2010 to 59% in 2017.

The popularity of Xylazine has coincided with alarming rises in amputations, tissue wounds, and bone disease in Philadelphia.

Since Xylazine emerged to dominate the drug scene, the city’s health department has witnessed a 20% increase in bone disease and a 5% increase in soft tissue illness.

According to Vice, the situation is so severe that last spring the city attempted to hire a field nurse and a wound care specialist to deal with Xylazine-related injuries.

As Xylazine eats away at the flesh of its users, the drug’s intended effect – relaxing muscles and reducing pain – generates further complications as people inject it into painful lesions to relieve their suffering.

As skin ulcers are painful, people may repeatedly inject xylazine at the ulcer site to alleviate the pain, as it is a potent 2-adrenergic agonist that… decreases perception of painful stimuli, according to a report published in Injury Prevention in 2021. Additionally, people may self-treat the wound by draining or lancing it, which can exacerbate negative outcomes.

Doctors report that Xylazine, a muscle relaxant intended for large animals such as horses, has emerged on the illicit drug scene in cities across the United States, joining fentanyl as one of the principal narcotics utilized to cut opioids.

The substance prolongs the highs associated with heroin, but causes users to pass out for hours as injection sites ulcerate and spread gruesome lesions across the body.

As Xylazine is not an opioid, most hospitals and first responders are not equipped to respond to overdoses, according to health care professionals.

Dr. Gjon Dushaj told Fox 6 that drugs like Xylazine do not generally react to Narcan. Therefore, when you expect someone to respond to Narcan and they do not, it heightens our awareness that something else may be there.

The current best method for treating a Xyalazine overdose, according to experts, is not to attempt to restore patients’ awareness, but rather to maintain oxygen flowing to their brains.

Amy Davis, assistant director for rural harm-reduction operations at Tapestry Health in Massachusetts, told NPR, “We don’t want to focus on consciousness; instead, we want to focus on breathing.”

»Xylazine is responsible for a third of opioid deaths in Philadelphia«