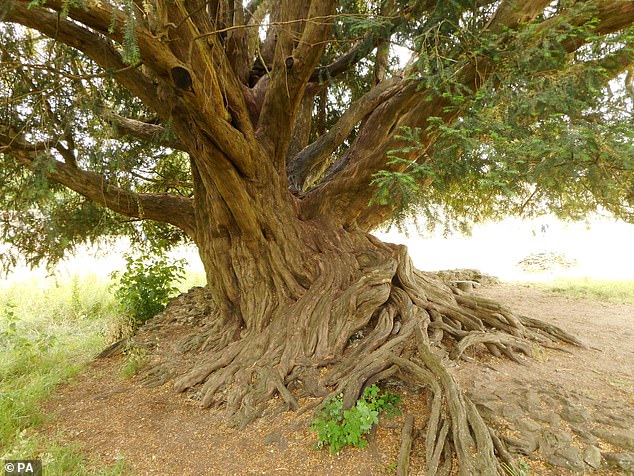 The Tree of the Year is an ancient yew whose roots emerge from the ruins of Britain’s first Cistercian monastery.

The Waverley Abbey Yew was awarded the prize for its beautiful, twisted roots that grow into and around the ruins of the same-named Cistercian monastery.

900 years ago, Waverley Abbey was the first monastery to be founded in Britain.

The estimated 500-year-old tree would have been a sapling when Henry VIII disbanded the monasteries in the late 1530s.

It will now represent the United Kingdom in the European Tree of the Year competition.

The old tree received 16% of the total votes, placing it ahead of The Portal Tree in Midlothian (11%), a Rowan that grows in the landscaped gardens of one of Scotland’s most significant historic buildings.

It is estimated that the twisted roots of the Waverley Abbey Yew are more than 500 years old.

This year, the Waverley Abbey yew, which is rooted in the ruined monastery in Farnham, Surrey, was deemed to be the finest specimen of its kind.

“It is wonderful to learn that this magnificent tree has been named Tree of the Year 2022, and the fact that it is rooted among the ruins of the abbey is a wonderful indication of how our ancient trees are interwoven with other aspects of our cultural past.

“We are requesting that these living legends have the same level of protection as our historic structures.

This tree is one of the numerous Living Legends that have witnessed significant historical events.

Dr. Michael Carter, Senior Properties Historian for English Heritage, stated, “The Yew tree at Waverley Abbey has been a witness to history for nearly five centuries.

The estimated 500-year-old tree would have been a sapling when Henry VIII disbanded the monasteries in the 1530s.

‘While the precise age of the yew is uncertain, it is believed that it has looked over the abbey grounds since shortly after the Dissolution of the Monasteries in 1536 – and has witnessed the transformation of its surroundings from a bustling religious community to a lovely ruin.

The tree is a magnificent reminder of the passing of time and a deserved recipient of Tree of the Year.

The spectacular Layering Horse Chestnut in Derbyshire, which received 10% of the votes, was presumably struck by lightning in the past, resulting in a hollowed and decaying trunk with new roots regrowing from the fallen limbs.

The Woodland Trust’s Tree of The Year contest, now in its eighth year, celebrates the nation’s favorite and most beautiful trees, their role in combating climate change, and their significance to nature, our history, and our legacy.