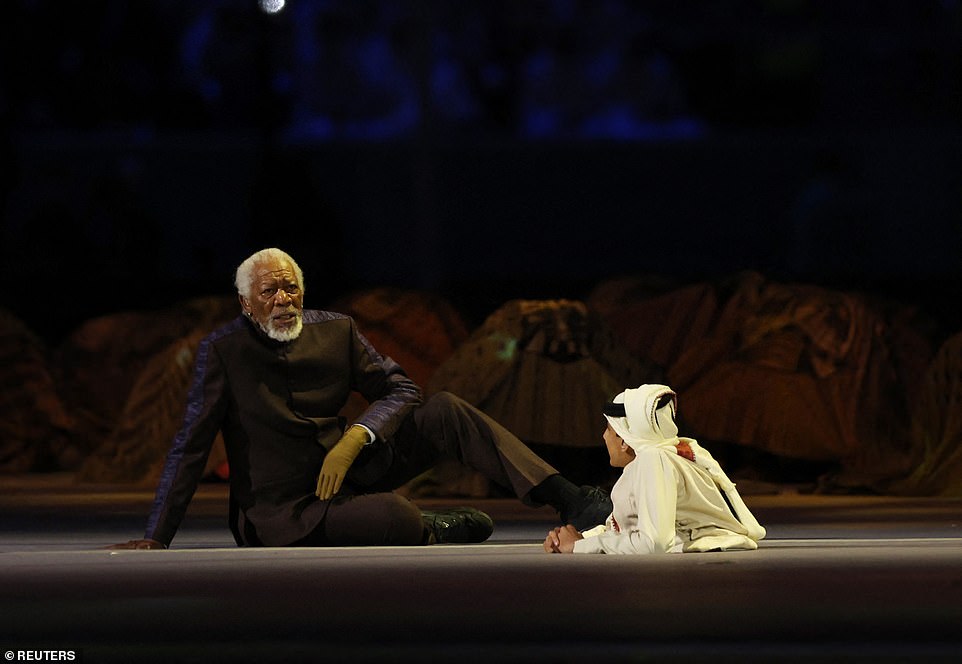 A World Cup shrouded in controversy is set to begin tonight with a glitzy opening ceremony, as hosts Qatar look to defeat Ecuador in the tournament’s opening match and dispel the criticism that has surrounded the showcase event.

The opening segment titled ‘The Calling’ was narrated by actor Morgan Freeman, who told viewers, “We all gather here as one big tribe” as fans descended on Doha’s city center for the upcoming start of the world’s largest football festival.

Scenes of the opening ceremony include ‘Leta’Arafo (Th Know One Another)’ with Morgan Freeman, ‘Chants of Nations,’ a World Cup Medley, a display of the official mascots, and Jung Kook of South Korean boy band BTS.

Supporters have now arrived at the Al Bayt stadium for this afternoon’s opening match in temperatures exceeding 30 degrees Celsius under a blazing sun.

Sheikh Mohammed bin Rashid Al-Maktoum, vice president of the United Arab Emirates and ruler of Dubai, arrived in Qatar for the World Cup opening on Sunday, according to Qatar’s news agency.

The powerful crown prince of Saudi Arabia and a delegation of ministers arrived in the neighboring country this morning to attend the opening ceremony, according to Saudi state media.

Mohammed bin Salman was accompanied by the energy, interior, foreign, commerce, and investment ministers of the kingdom, as well as senior officials including his national security adviser and the head of the National Guard, according to the official Saudi Press Agency.

Women in black shayla headdresses and abayhas and men in white thobes were seen entering the stadium, which was designed to resemble the tents used by nomads.

They were accompanied by Ecuador supporters, many of whom wore elaborate headdresses, balaclavas, and masks and carried national flags.

Outside the stadium’s entrance gates, fans from both teams paused to take photos with one another, creating the impression of a cordial atmosphere.

Before the first match begins at 4 p.m., there will be a massive fireworks display, live music performances, and much more.

Nora Fatehi is confirmed to perform the World Cup single “Light The Sky” alongside Jung Kook of K-Pop sensations BTS.

Robbie Williams is also scheduled to perform, and the Black Eyed Peas are rumored to be in attendance.

As host of the first World Cup in the Middle East, the Emir Sheikh Tamim bin Hamad al-Thani is expected to welcome a star-studded guest list, including the crown prince of Saudi Arabia and the presidents of Egypt and Algeria.

Many of the laborers who worked to construct the eight stadiums will be spectating from the sidelines, unable to afford the highest ticket costs ever for a World Cup, despite laboring valiantly to meet a punishing schedule that claimed the lives of many of their coworkers.

However, the England football team will provide complimentary tickets to a select few members of the crowd.

Prior to the event, the controversy that has long surrounded the decision to give the World Cup to the tiny Gulf state has reached a peak, with continuous scrutiny of its treatment of migrant workers and the LGBT+ population.

Qatari fan Hakeem Ahmad told Reuters as he approached the stadium with his wife and two children, “We are ready.”

Whatever transpires on the field, the world should view us favorably today.

“We have planned this party just for you. If Qatar can play well, it would be to our advantage.

“We hope that after today, people will view Qatar differently, for who we truly are.” It is time to discuss Qatar constructively.

“Once the first ball is kicked, nobody cares if it’s being held on a sacred burial ground or powered by coal,” he wrote.

This is the desire of football’s governing body FIFA and Qatari organizers, who have urged detractors to keep their attention on the sport and not pull it into ideological or political conflicts.

Wilmer Saltos, 35, a farmer who has traveled from Guayaquil on the coast of Ecuador with his brother and sister, told Reuters while waiting in the heat to enter the stadium, “This is my first World Cup.”

When we learned that Ecuador would kick off the competition, we knew we had to be present. Clearly, there are significant cultural distinctions; you cannot refute this.

Today, though, is all about football for us; we only wish to concentrate on the game.

While Qatar is hosting one of the sport’s largest parties, it will be largely alcohol-free due to the decision of officials to turn off the beer faucets inside the stadiums, which has drawn additional criticism.

Qatar is a teetotal nation where alcohol can only be purchased or consumed in licensed hotels and restaurants.

However, as a result of Qatar’s breach of contract, alcohol will now only be accessible in “fan zones” and not at the stadiums.

Pints will cost £12, will only be accessible at particular times, and will be limited to four per person to prevent intoxication.

Beer or no beer, Qataris and tens of thousands of foreign fans have descended upon the FIFA Fan Festival zones in central Doha along the city’s iconic Corniche, ready to celebrate.