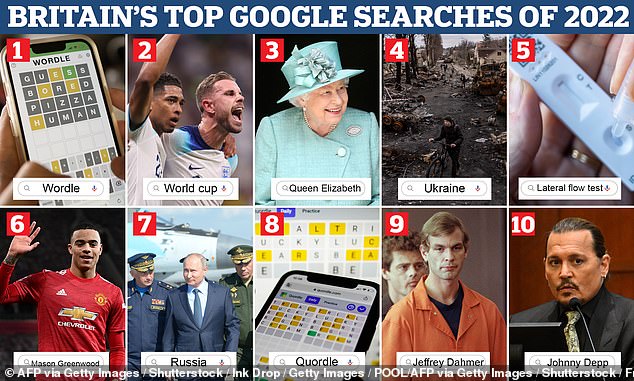 Wordle was the most Googled phrase in the United Kingdom in 2022, followed by Queen Elizabeth, the World Cup, Ukraine, and Johnny Depp.

The data represents the highs and lows suffered by Britons this year, from the heartbreaking passing of the Queen to the cost of living crises, regular railway strikes, and the global pandemic.

According to Matt Cooke, head of Google News Lab, the list “reflects the spectrum of emotions experienced.”

It is humbling to learn that a game such as Wordle provided solace among severe highs and lows, such as national sorrow and geopolitical uncertainty.

Wordle was the most-searched phrase on Google in 2022, followed by Queen Elizabeth, the World Cup, Ukraine, and Johnny Depp.

Late in 2021, Wordle had a rapid spike in popularity, and by January, the New York Times had bought the rights.

Young and old alike incorporated the game into their daily routines, guessing the five-letter phrase while sipping their morning coffee or commuting to work.

Wales’ qualifying for the World Cup for the first time in 64 years enhanced interest in the tournament in the United Kingdom, but England’s early success has also improved the results.

The third most-Googled keyword was Queen Elizabeth. The early half of the year was dominated by her Platinum Jubilee, but her untimely demise afterwards gained precedence.

The demise of Her Majesty was also the most-searched news event of the year.

Following Russia’s invasion of Ukraine in February, the conflict in Ukraine appeared on both the general top searches list and the news events list.

While Covid restrictions may seem like a distant memory to some, the volume of early-year searches for ‘lateral flow test’ was sufficient to propel it into the top five.’

Prior to his trial on attempted rape and assault charges, Mason Greenwood, a striker for Manchester United, was the sixth most searched phrase of the year.

Russia was the seventh most popular search phrase, while Quordle, a more challenging variant of the game, was eighth.

After the premiere of Netflix’s Jeffrey Dahmer series, the serial killer’s name was searched so frequently that he rocketed into the top 10 in Britain, landing in ninth position.

The main list concludes with actor Johnny Depp, who was once again catapulted into the limelight this year due to his massive libel trial against his ex-wife Amber Heard.

Kate Bush, whose 1985 song Running Up That Hill was included in a now-iconic sequence from the most recent season of Stranger Things, was the year’s third most-searched performer.

Evan Peters was also among the top 10 most-searched actors due to his popularity as the title character in Monster: The Jeffrey Dahmer Story on Netflix.

Despite holding the position for only 44 days, Liz Truss was the fourth most searched person in the United Kingdom this year, followed by her successor Rishi Sunak.

Will Smith and Chris Rock were two of the most sought-after actors following the iconic Oscars slap, while Johnny Depp and Amber Heard appeared in many categories following the monumental libel lawsuit.

Among the more peculiar queries reflected in the statistics was “How many nations finish in stan?” in addition to ‘How many wheels are there in the world?’

Is the Queen deceased?

When is the funeral of the Queen?

Why does Russia invade the Ukraine?

Where will the Queen be laid to rest?

What age is Diana Ross?

What occurs when the Queen passes away?

When does Father’s Day occur?

When does the FIFA World Cup begin?

What is the NATO?

10. How did Jamal Edwards die?

How many cities are there in Wales?

How many nations finish with stan?

How many people saw the burial of the Queen?

How many doors are there in the world?

How many episodes is Season 4 of Stranger Things?

How many wheels are there in the world?

How many Conservative MPs are there?

How many children does Queen Elizabeth have?

How many episodes of Trigger Point have aired?

How many King Williams have existed historically?

When is the funeral of the Queen?

When does Father’s Day occur?

When does the FIFA World Cup begin?

When is the Jubilee of the Queen?

When will the coronation take place?

When will FIFA 23 be released?

8. When did Prince Philip die?

When does I’m a Celebrity begin?

When is the next presidential election?