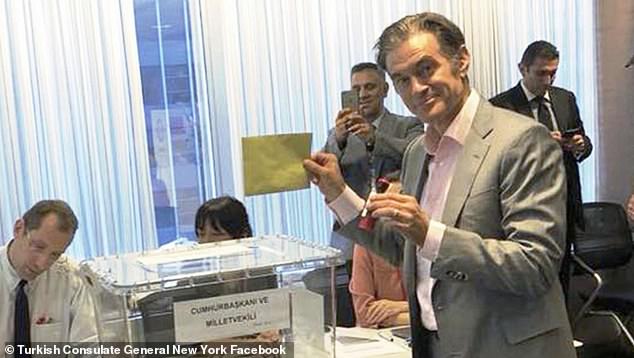 Donald Trump said at a Pennsylvania rally Friday that one of the highest priorities in getting Republicans elected to Congress is to now dissolve President Joe Biden’s new Disinformation Governance Board.

‘One of our highest priorities will be to cut down on left-wing censorship and restore free speech in America,’ Trump said during a rainy, chilly and extremely muddy rally in Greensburg, Pennsylvania endorsing Dr. Mehmet Oz for U.S. Senate. ‘We don’t have free speech.’We don’t have free speech and we have a totally crooked press, all of them back there,’ Trump said, pointing to the cameras and press documenting his latest rally.

‘We will immediately terminate Joe Biden’s so-called disinformation governing board, how about that one?’ Trump said. ‘A chilling and un-American power grab that we will not allow to stand.’

Biden’s Department of Homeland Security (DHS) announced last week the creation of the board, insisting it is aimed at combating misinformation – especially online – related to homeland security issues.

Republicans immediately denounced the board as dystopian and likened it to the Orwellian ‘Ministry of Truth’. They also said it would be another way for Democrats and the government to try and police what conservative voices say online.

Trump basked in this week’s primary results as he took the stage at a rally in the southeastern suburb of Pittsburgh, saying he wasn’t afraid to endorse ‘out of the box’ candidates like Dr. Mehmet Oz.

Oz, the celebrity heart surgeon who is running for the Pennsylvania Senate seat despite not living in the state, is a ‘great gentleman,’ Trump said, before calling him up on stage with him.

In Ohio, Hillbilly Elegy author J.D. Vance was able to cinch a victory in the Republican primary after a last-minute endorsement from the former president. Former Trump aide Max Miller won his race for the House seat vacated by retiring Rep. Anthony Gonzalez, who Trump promised to primary after he voted for impeachment.

Vance was propelled from the middle of the pack to a 9 point lead on Election Day after Trump’s endorsement.

‘You know, we endorse a lot of people a little bit out of the box, you know, they said well, does he endorse front runners? No,’ Trump said.

Trump admitted that Vance was ‘not leading,’ drawing parallels between Vance and his endorsement in the Pennsylvania Senate race, Dr. Mehmet Oz.

‘We endorse JD and he was like a rocket ship,’ Trump added.

‘He’s a great gentleman. I’ve known him so long,’ Trump said of Oz, adding that the celebrity surgeon has ‘by far the best chance to win.’

‘His show is great, he’s on that screen, he’s in the bedrooms of all those women.’

‘He’s taking a lot of horrible, unfair and untrue shots.’

Trump also claimed the victories of his endorsed candidates was proof he had ‘transformed’ the party.

‘We have a total record of 55-0,’ Trump said, adding ‘we have transformed the face of the Republican Party – thank goodness.’

Trump then tore into Republican Sen. Pat Toomey, who he said was ‘horrible on China’ and added that he denied Trump the endorsement.

Trump also claimed that Toomey would never have voted to impeach Trump if he had given him his endorsement.

‘You have a Senator who is very weak on China,’ Trump said.

‘I wouldn’t give my endorsement. I couldn’t run this guy, to me he was so bad on China.’

Trump said he asked Toomey about putting in place a 100 percent tariff on Chinese goods, and Toomey responded: ‘No, sir, that’s not free trade.’

‘In all fairness, and I will say this, he fought hard for it. He wanted it – he hired almost every person that worked anywhere, if anybody was within 200 miles of me, he hired them.’

McCormick has his own ties to Trump world – his domestic policy adviser and speechwriter Stephen Miller and longtime communications aide and counselor Hope Hicks had both been working on McCormick’s campaign (Miller dropped McCormick when Trump went for Oz).

Trump’s former secretary of state Mike Pompeo and and longtime Trump ally Ted Cruz have also broken with the former president and gone for McCormick.

‘He did want my endorsement very badly, but I just couldn’t do it,’ Trump said of McCormick.

Earlier Oz came on stage at Donald Trump’s Pennsylvania rally guns blazing to tell supporters that lawmakers need to use their ‘fists metaphorically’ instead of index cards in the culture war against Democrats.

Hundreds of rally-goers braved persistent rain, chilly conditions and inches of mud to hear from Donald Trump in a southeast suburb of Pittsburgh, Pennsylvania on Friday evening.

But several made it clear that they are not at the rally to support Dr. Oz.

Oz kept his remarks quick and focused on pro-MAGA topics, such as lauding Fox News personality Sean Hannity and bashing big pharma and Democrats for wanting people to be ‘sheeple.’

‘The shocking reality is the Green New Deal – it’s a lie, it’s not real, it can’t be done the way they say it. I’m telling you as a scientist. But as a leader, I’m also going to be clear, we’re going to push back on that,’ he said, taking aim at the progressive energy and environmental proposal.

‘Republicans have been fighting,’ he continued, ‘you know, walking into this culture war knife fights with index cards.’

‘Index cards don’t work there, you’ve got to go in there with your fists sometimes – metaphorically,’ Oz said.

‘Dr. Oz is gonna get booed out of here,’ 53-year-old Amy told DailyMail.com at the rally on Friday, saying that she was at the fairgrounds since 8:00 a.m. ‘I’m in a truther group and they’re all saying that. He’s not from the state, that’s my thing.’

Voters in Ohio were also hesitant about Trump’s endorsement of Vance, who just won his Republican primary bid for Senate with the backing of the former president.

In the run-up to the rally, Trump’s former Secretary of State Mike Pompeo took the stage for Oz’s chief rival, hedge fund executive David McCormick, raising concerns at a press briefing over the surgeon’s ties to Turkey.

Pompeo, who, along with Republican Texas Senator Ted Cruz, has endorsed McCormick, cast doubts about Oz’s ‘priority’ over a 2018 vote he cast in Turkey’s elections.

‘We criticize American candidates all the time because they didn’t vote,’ Pompeo said. ‘This is different from that. Not only did he not engage in the American [process] but he engaged in the Turkish political process. That raises in my mind a lot of judgments about his priority.’

‘This isn’t about whether it’s lawful, it’s about who is best suited to be the next United States senator from Pennsylvania that’s been represented by a patriotic American conservative for an awfully long time,’ the former secretary added.

The remarks hint at opposition to Trump in the runup to the 2024 presidential election, amid speculation that Pompeo is thinking of launching his own campaign.

Pennsylvanians are split on Oz, claiming they are unsure about his candidacy for Senate considering he is not a native of the Keystone State. Here a pro-Trump rally attendee wears an orange rain coat with the letters ‘No Oz’ taped to the back