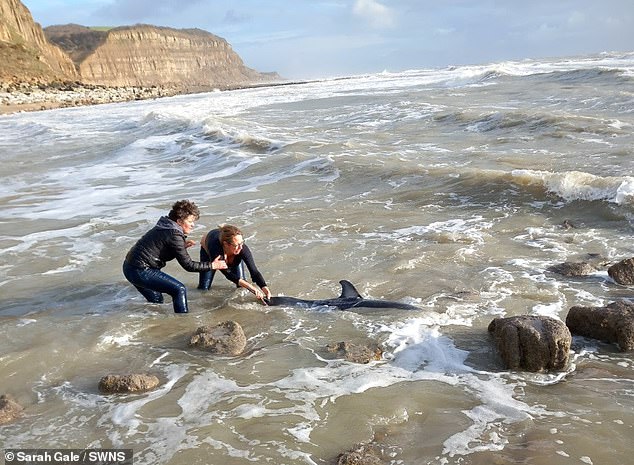 Three women braved the icy waters of the English Channel to free a dolphin from a rocky crevice.

After stopping to see a group of “unusual-looking” seagulls hovering near the rocks at Rock-A-Nore Beach in East Sussex, they observed that a marine creature was entangled in the water.

The group struggled with the current for about twenty minutes, fearing they would be unable to liberate the dolphin.

Eventually, though, they were able to flip the animal and release it, so that the dolphin would not suffer.

Three people risked the frigid water to save a dolphin from a rocky crevice.

The three individuals spent nearly twenty minutes struggling against the water near the rocks at Rock-A-Nore Beach in East Sussex, fearing they would be unable to liberate the dolphin.

Amy Walker, Carrie Warrior, and Sarah Gale were out on the beach on December 29 for their Christmas walk when they observed a fox and hovering seagulls.

After noticing the terrified animal, which they initially mistook for a shark, they acted immediately.

Ms. Walker, age 42, flung her coat to Ms. Gale and jumped into the water, followed by Ms. Warrior.

She and Ms. Warrior spent twenty minutes in the icy water attempting to release a distressed dolphin from a rocky crevice.

Ms. Walker, a television producer, stated, ‘It was quite difficult because the sea was choppy and the rocks prevented us from gaining a solid foothold on the bottom.

“As the tide was pouring in, we were being knocked over and had to help each other up while attempting not to stress the dolphin any further.”

I was assuring her that she would be fine. We were at the end because we were unsure if she would bite us because she was so massive.

Eventually, though, they were able to flip the animal and release it, not wanting the dolphin to endure any further pain.

During the rescue, the women were ‘battered’ by rough waves and had difficulty seeing the rocks owing to the conditions.

Two women manipulated the dolphin for over twenty minutes before they were able to turn it and release it.

During the rescue, the women were ‘battered’ by rough waves and had difficulty seeing the rocks owing to the weather conditions.

‘Many times I feared we wouldn’t be able to release her, but how could we stand by and let such a creature suffer? She was stunning,’ recalled Ms. Warrior, a 57-year-old artist.

We had to manipulate the dolphin for over twenty minutes before we were able to turn it and finally release it.

Ms. Walker continued, “Watching her swim off into the distance was a breathtaking sight.” We hope she will be fine.

The three individuals, who all play for the local rounders team Hastings Rounders, revealed that they were initially uncertain as to which sea species required their assistance.

Ms. Warrior recalled, “Initially, we all believed it to be a shark.”

By the way it was flailing, we could tell it was caught in a rocky ravine. How can we pull its tail with teeth on the other end?’ I wondered.

When we got closer, we realized it wasn’t a shark, but rather a dolphin or possibly a porpoise, as Ms. Gale, a retail employee, said.

“Amy had read something about avoiding approaching beached animals, and she was attempting to look it up on Google, but we had no signal. We could all see that time was running out.”

Then Amy just exclaimed, “Hold my coat!” and Amy and Carrie were in the lake before I knew it.

The women confirmed that the dolphin swam west of Hastings in the direction of Bexhill after being released.

Ms. Gale, 62, divulged that Ms. Warrior had mentioned mustering the confidence to go for a swim before they took action.

Sarah, who took images of her pals in the water, said, “We hadn’t played rounders in two weeks, so we were eager to get out for a stroll.”

Carrie wished she had the confidence to go for a swim about a half-hour before they both ended up in the lake and remarked on how lovely the stroll was.

This was unquestionably a victory for Hastings Rounders!

Ms. Warrior, a frequent swimmer in the ocean, adding, ‘It was unquestionably a two-person job, but we are always a team at Hastings Rounders!’

Additionally, she advised others to avoid the river during this time of year and to get professional guidance before approaching a wild animal.

In addition, Ms. Warrior confirmed that the dolphin swam in the direction of Bexhill, west of Hastings, after being released.