A 36-year-old woman is expected to appear in the Tsakane magistrate’s court today on charges of defeating the ends of justice and perjury.

The woman was arrested on Friday. She allegedly beat her nephew to death and then hired her neighbours to dig a hole in her backyard under the pretense that she wanted to install a Jojo water tank.

K-9 police made the gruesome discovery of Neo Mahlangu’s body on Thursday night after they received a tip-off that he had been buried at his aunt’s backyard in Tsakane, Ekurhuleni. Neo,16, who lived in Daveyton, had visited his aunt last month when she reported him missing on March 24. 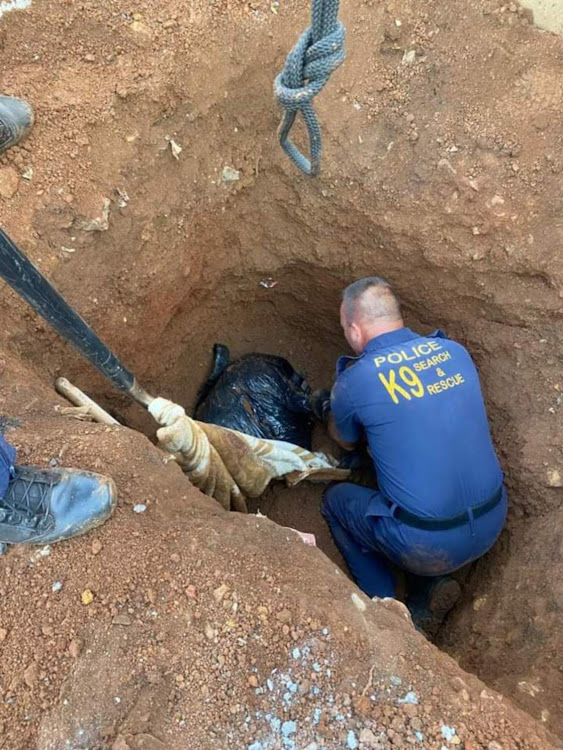 Gauteng police spokesperson Col Dimakatso Sello said: “A 36-year-old woman was arrested on April 1 2022 for the alleged murder of her 16-year-old nephew in Tsakane. According to reports, the suspect assaulted the teenager to death and buried him. The suspect then reported the victim missing on March 24 2022.

“On March 31, the Gauteng organised crime team followed up information and questioned the woman, leading to the discovery of the body that was buried in the backyard,” said Sello.

A neighbour, who spoke to Sowetan on condition of anonymity, said he was still shocked by the gruesome discovery the police made at the house. “I was sitting in my house around 11pm when I saw a lot of cars outside the house. At first I thought it was her friends who came to see her because she always had visitors. Then I saw police cars and K-9 members and realised that something was wrong,” said the neighbour.

“I could see a light was switched on at the back of the house and from the shadow, I could see that police were digging. It was on Friday at 6am when I saw police escorting her to their vehicle. That’s when I knew she was arrested and a body was found,” said the neighbour.

The neighbour, who has been living in the area for over 30 years, said the suspect was a “private” person who kept to herself.

“I would only speak to her when we greet each other. I did not know her very well. There was a lot of movement at her house. I think she was selling houses and renting out property. She also looked like a bully because I could hear her from my house when she was talking to people on the phone and shouting at them,” he said.

“What happened is painful. This is a complete shock. The rumours are that she killed the boy during the long weekend [March 19 – 21]. It means we have been living with a corpse for over a week. It is sad,” said the neighbour.

When Sowetan visited the house yesterday, the gates were locked and no one could be seen inside the house or yard. Two mounds of soil could be seen at the back of the yard.

Shortly thereafter, a man and a woman, who identified themselves as the uncle and great-grandmother of the suspect, said they lived in the house and it was their property.

The uncle, who also spoke to Sowetan on condition of anonymity, said the woman had been living in the house with her 14-year-old son since 2017. The son is in the care of relatives.

“We are still shocked by what happened. My nephew would come here to see his aunt a lot. We are a family and we get along very well. We never had problems. We cannot believe what happened. Maybe if she had killed someone else and not a relative we would feel less pain,” said the teary uncle.

Two other neighbours also said the suspect was a private person and didn’t seem like she was capable of murder.

“We would always see her around her house. She did not look like someone who was capable of killing anyone,” said one neighbour.