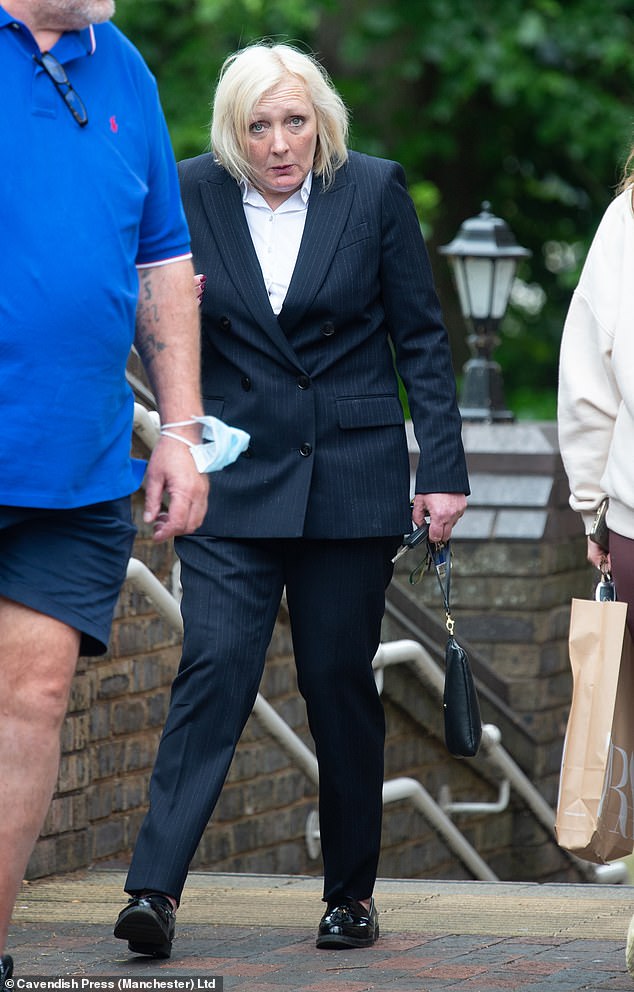 A businesswoman who exposed herself in public in front of a Waitrose store was fined £200 after claiming that the decline of her company during the Covid pandemic was causing her stress.

On a Friday afternoon in February of this year, Beverley Dean, 54, admitted to exposing and engaging in a sex act on herself while sitting on a bench in Northwich, Cheshire.

The court was told that during the incident, Dean was sitting with her blouse undone and her jacket hanging off her shoulders, and a mother carrying her young children down the street by a river bank was reportedly forced to rush past for fear that they would see Dean.

Two financial advisors working across the street eventually caught sight of her and called the police.

Sex toys were found in Dean’s handbag when the police searched her when they arrived.

Eyewitnesses claimed she appeared to be filming herself as she touched herself beneath her skirt during the course of the investigation. On her phone, though, there was no video.

Dean from Rudheath, Northwich initially faced jail time at Chester magistrates court after she admitted to a charge of outraging public decency.

She was given a fine and community service instead after her attorney claimed she was “too embarrassed” to accept responsibility for her actions.

Her ex-husband, with whom she had separated following the pandemic, was present in court to defend her.

The incident happened on February 25th, 2017, at 3:30 p.m., after Dean had sat down on a bench in Northwich that overlooked the River Dane.

Two women from CRS Consultants, whose office is on the other side of the river, observed her.

According to the prosecutor, Miss Shannen Carey, “She appeared to be performing a sex act on herself.”

She appeared to be filming or photographing herself while performing the act with her phone in her right hand.

She took a break to light up a cigarette before continuing.

She then got off the bench and stood up, exposing both of her breasts. She had her coat dropping off her shoulders, and her blouse was undone.

“One of the bystanders reported seeing a mother hurrying two young boys along as she went by in order to avoid having to look at what was going on.

The defendant was taken into custody after officers were called.

“Her property was searched, and the defendant’s bag contained a variety of sex toys and lubricants.”

Dean had never been convicted before.

Mr. Shane O’Neill, the defence attorney, stated that he thought she had trouble accepting what she had done and was having trouble talking about it.

She originally rejected the allegations when I went to the police station after her detention,’ Mr. O’Neill claimed. ‘She stated the same to police as to the probation agency.

“I honestly believe that she is not attempting to con people. Simply put, she finds the entire thing humiliating. The things she did horrify her.

“Her ex-husband has been a great support and has joined her.” He has been of considerable assistance.

Mr. O’Neill said that despite Dean’s protestations to the probation agency, she had shown a desire to study concerns connected to her consequential thinking abilities.

He added that Dean and her husband had previously had a firm that went “belly up” during the epidemic.

The lawyer stated, “She has not felt comfortable discussing this matter with myself. She had never even received a parking ticket when she suddenly commits this type of offence. There is no doubt that the probation service can look into this.

For this to occur at the age of 54, something must have happened in her life. When you do something, the anticipation builds. Perhaps she’s done it previously or has practised it before.

She and her spouse had a failing company. The relationship suffered as a result of the strain this placed on it. Nevertheless, they remain close friends.

Both before and after this tragedy, her life had been disorganised. She has been living with a number of pals and is now aiming to restore her life as she will soon be moving in.

She acknowledges that there is a problem and agrees to cooperate with the probation department. Some office employees saw the crimes being committed and reported them to the police.

Although you may disagree with me, I didn’t believe it lasted very long. No moms of children have made a declaration claiming that it has had an impact on their kids.

She does want to convey her sincere regret for the whole situation and wants to move on from it. She promises that the situation won’t happen again.

Dean was sentenced by District Judge Nicholas Sanders, who noted that Dean had pleaded guilty and had no prior convictions, both of which were very favourable to him.

When I read the report, it concerned me that you were still maintaining your denial, but since you have since come to terms with what you did and are willing to cooperate with the probation service, I will take their advice.

We don’t know for sure what you were doing on that particular day in the courtroom.

“It might be a result of a lot of stress, or it could be a result of many other things.” You must be forthright and truthful with the probation service.

Dean was also mandated to pay £180 in costs and a victim surcharge in addition to serving a 12-month community order with 30 days of rehabilitation work.