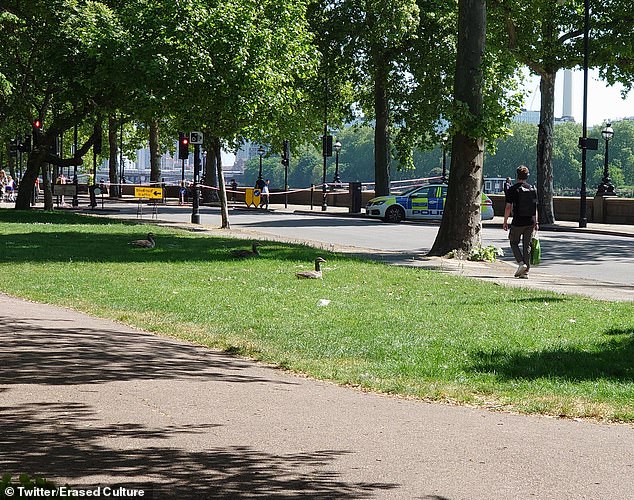 A woman and three dogs were killed early this morning after they were struck by a car in Chelsea, west London.

The driver of the Audi was arrested at the scene on Cheyne Walk – where properties sell for several million – on suspicion of causing death by dangerous driving.

The woman’s family are currently being supported by specialist officers following this morning’s tragic incident.

According to Scotland Yard, the woman and the three dogs all suffered catastrophic injuries.

In a statement, the Met said they were called to Cheyne Walk, SW3 at 6.21 following reports that a woman and three dogs had been struck by a car.

The car also demolished a traffic light before coming to a halt.

A spokesperson said: ‘Officers attended along with paramedics from London Ambulance Service (LAS). A 41-year-old woman was found dead at the scene. All three dogs have also died as a result of injuries suffered in the collision.

The women’s next of kin have been notified and are being supported by specialist officers.

‘The 26-year-old male driver of an Audi car, which had been involved in the collision, was found with minor injuries . He has been arrested on suspicion of causing death by dangerous driving and taken into custody

‘A crime scene has been put in place. Motorists are being advised to avoid the area as road closures are in place.’

Any witnesses, or anyone with any dash cam footage, is asked to call police on 101, quoting CAD 1500/14May.