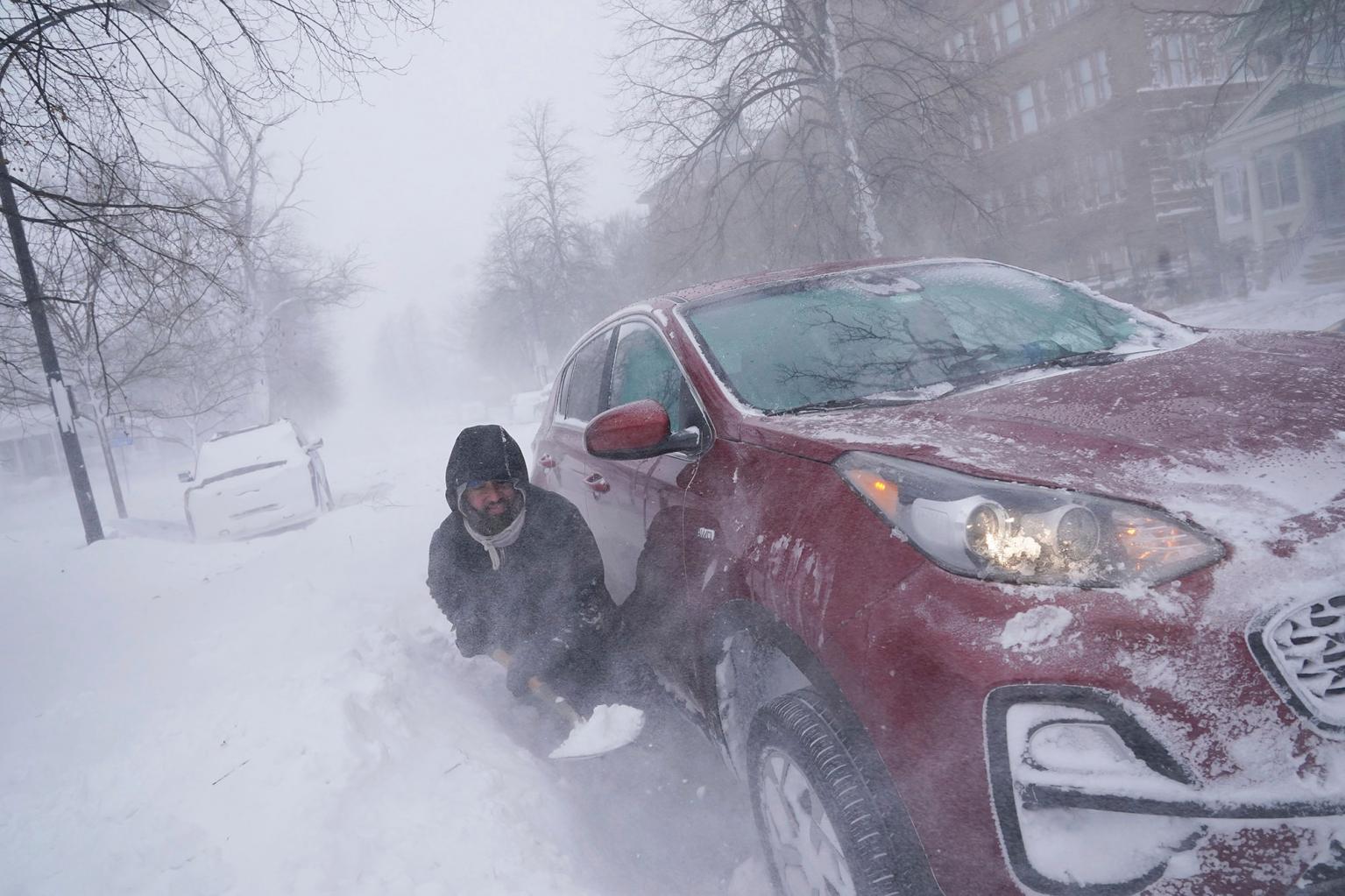 Following a severe winter storm that devastated more than half the nation and left at least 18 people dead, millions of Americans awoke in the dark to a dangerously windy and snowy Christmas.

This weekend, around 60% of the US population was under a winter weather advisory or warning, and much of the eastern half of the nation was dealing with much below-average temperatures.

According to The Buffalo News, snow was falling in Western New York at a pace of three inches per hour, and driving was prohibited in Erie County early on Sunday.

According to the National Weather Service, at least three individuals have died in the area due to blizzard conditions that were made worse by wind gusts of up to 79 miles per hour on Friday and “zero visibility.”

According to Poweroutage.us, wind gusts had reduced to 40 miles per hour on Sunday, but 4 to 5 feet of snow were expected to fall in the city until Sunday night. As a result, more than 28,000 residences were without power on Christmas morning.

Bomb cyclones, which form when atmospheric pressure plummets and cold air collides explosively with warmer moist air, are to blame for the hazardous and maybe record-breaking circumstances.

According to Governor Kathy Hochul, the rapidly falling snow had suffocated first responders and left almost every fire engine in the city stuck. In the city, snowdrifts reached heights of six feet.

According to Erie County Executive Mark Poloncarz, the severe weather event may be “the worst storm in our community’s history” and that ambulance trips were taking three hours.

He cautioned that “many, many communities, particularly in the city of Buffalo, are still inaccessible.”

Chief Tim Carney of the Erie County Sheriff’s Office compared the extreme weather to a “Category 3 hurricane with a lot of snow thrown in.”

Jeremy Manahan spent almost 30 hours without power before he braved the snow and ice to charge his phone in his vehicle.

There is just one warming shelter, but I couldn’t reach it because of the distance. I definitely can’t drive because I’m trapped,” Manahan remarked. And being outdoors for more than ten minutes results in frostbite.

When his car became stalled in Buffalo on Friday, Ditjak Ilunga of Gaithersburg, Maryland, was transporting his family to Canada for the Christmas. They struggled to remain warm in the car for hours, even after it was almost completely covered with snow.

When the SUV ran out of petrol early on Saturday morning, Ilunga took his 6-year-old daughter Destiny and their Pomeranian dog to a local shelter while Cindy, 16 at the time, followed in his footsteps.

He remembers thinking, “If I remain in this vehicle, I’m going to die here with my kids.” Ilunga sobbed as the desperate gamble succeeded and the family arrived to the refuge.

I shall never forget that in my life, he said.

From Canada to Mexico, the cold was felt, as migrants camped out in the frigid cold along the border as they awaited the Supreme Court’s decision on a pandemic-era rule that had barred them from entering the nation.

Four individuals lost their lives in a pileup involving more than 40 automobiles on the Ohio Turnpike, while another four perished in car accidents in Missouri and Kansas.

A guy who seemed to be homeless was murdered by the cold in Colorado, while a lady who fell through river ice in Wisconsin died. A tree limb that fell on a Vermont lady caused her death, and an Ohio utility worker was electrocuted.

Through Christmas Day, there were blizzard and travel advisories in force for Montana and sections of Idaho.

The National Weather Service warned that travel “may be extremely difficult to impossible.” Snow that is blowing widely will substantially impair visibility, and snow that is drifting might completely obstruct lanes.

According to the flight monitoring website FlightAware, as of 7:30 a.m. on Christmas morning, 2,735 flights had been canceled and 5,519 had experienced delays from coast to coast.

Utility employees said that more than 91,000 households and businesses were without power in Maine on Christmas morning, and that many of them would still be without power for many days.

Even yet, workers have been working to switch on the electricity for hundreds of thousands of people in time for Christmas morning despite a major utility’s warning of rolling blackouts that might impact 65 million people in the eastern US.

In North Carolina, the number of dark clients has decreased from a peak of around 500,000 to just approximately 6,500. After a day of being without power, much of the remainder of New England outside of Maine had it restored, including 273,000 consumers.

On Christmas Eve in Buffalo, several stranded travelers arrived to the Truth Urban Ministry with ice and snow stuck to their clothing and frozen red cheeks from low temperatures.

Shelter employee Vivian Robinson stated, “It’s heartbreaking simply to witness the pain that they felt they weren’t going to make it, and to realize that we had opened up the church, and it gave them a feeling of comfort.”

“Those present are clearly having a great time. Everyone will experience Christmas differently.