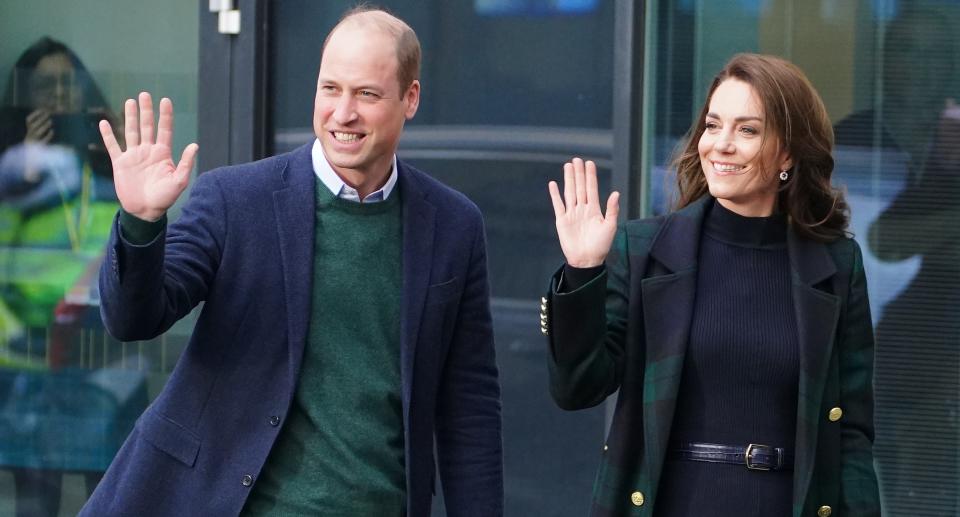 For the Welsh, business as usual prevails.

Arriving at Royal Liverpool University Hospital in Liverpool, England, the couple synchronized their waves and grinned warmly at cameras waiting outside the four-decades-old hospital that was replaced by a state-of-the-art facility.

The Princess of Wales wore a dark blue Cefinn Eva Wool Knit Maxi Dress ($353) and a Blackwatch tartan Double-Breasted Coat ($913) from one of her latest go-to labels, Holland Cooper.

She also possesses the black long wool dress with blouson sleeves, which she was pictured wearing while leaving Windsor Castle after the death of Queen Elizabeth II last September.

Regarding her fashionable coat, Middleton has worn it twice thus far, as shown in photographs at a tree-planting event at Westminster Abbey last month and in a video for the Royal British Legion released in November 2021.

Meanwhile, Prince William coordinated with his wife by donning navy pants and a matching jacket, as well as a green sweater over a dress shirt.

During the tour, the couple met with employees and patients, including some members of Prince William’s 2020 video call team.

This is the Waleses’ first public appearance since Christmas, following the highly publicized publishing of Prince Harry’s explosive book. Royal sources told Page Six that while seeming in good spirits today, the couple is still reeling from what the duke said about them in the book.

As they reached the hospital’s throng of people, Prince William placed his hand on his wife’s back.

Tom Bower, author of “Revenge: Meghan, Harry and the War Between the Windsors,” disclosed that the Princess of Wales was “outraged and hurt” upon reading the book’s revelations, while royal biographer Katie Nicholl stated that Prince William was “privately seething and devastated by what Harry has done.”

Regardless of what is occurring behind closed doors, the couple continues their royal duties in style.

The book written by Prince Harry contains intimate accounts of his interactions with members of the royal family.