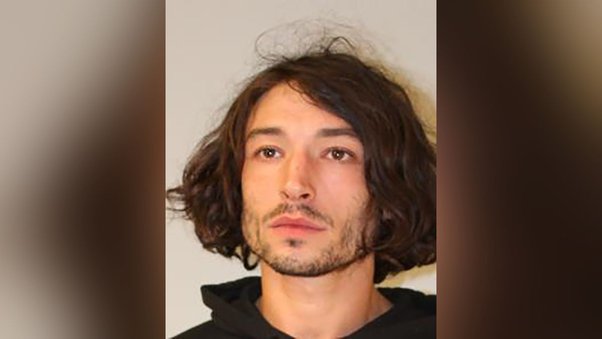 The tale of Ezra Miller is one of my favorite and most bizarre tales of current-day Hollywood lore. The famous ‘the Flash’ actor with a hairstyle and face that remind me of Richard III, has been… terrorrizing the people of Hawaii, for some reason? He’s been on a bit of a rampage now for over a month.

In March he was arrested for taking away the microphone of a woman in a karaoke bar — he didn’t like her song, or something? Husband stands up for his lady, Miller punches him in the face. Gets into some big brawl. Gets dragged off the premises by police, all the while yelling awful obscenities, drunk as shit. Posts bail, is freed the next day. April 20, yesterday, he intrudes on a private gathering, again in Hawaii as they haven’t kicked him off the island yet for some reason. Told to leave he fights the group and ends up throwing a chair into the crowd, which hits a young woman in the face; she is injured to the forehead. Police again break up the fight and arrest Miller.

Another story — in between the two arrests, Ezra Miller reportedly tried and failed to rob a couple. The plot just, thickens, and thickens. More than a year ago he tried to strangle a woman in Iceland. He got away with it. Even though the whole incident was caught on camera; Miller quickly left Iceland to avoid prosecution.

Who are his people? His team needs to come get him so he stops terrorizing the poor people of Hawaii. It’s obvious that he’s unwell. Also why does he keep getting released from jail??? And if one of you brings up his PrOnOuNs, I swear:

No seriously… this has gone on long enough. Ezra Miller has been arrested twice in just one month time. He has assaulted, threatened, attacked and tried to rob people. Strangled a woman, on camera no less. Gotten into fights with waiters, bouncers, even fans, for no apparant reason, for years.

And it doesn’t seem to end. Last time I saw the fellow act he played a spree shooter in “We Need To Talk About Kevin”. An excellent film and I thought “wow this dude can act!” but now I’m scared his creepy ass was just playing himself.