Skip to content
Go Home «» News «» Breaking News «» Why this summer was different than any previous, according to Sabrina Ionescu 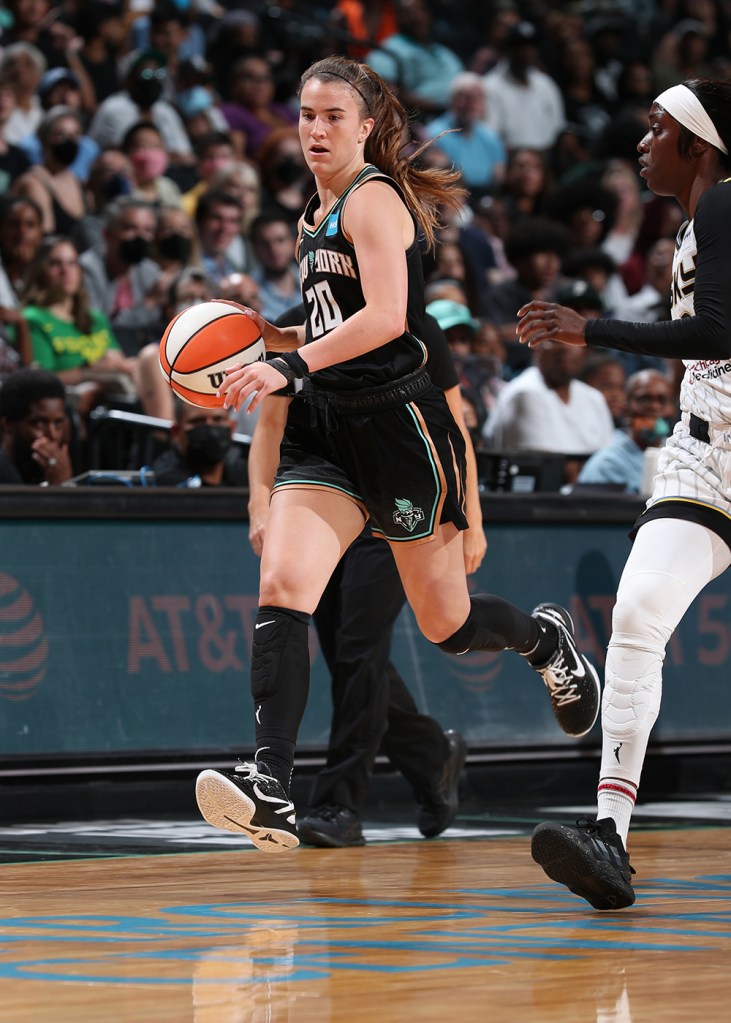 Sabrina Ionescu, guard for the New York Liberty, dribbles the ball during Round 1 Game 3 of the 2022 WNBA Playoffs at the Barclays Center in Brooklyn, New York on August 23, 2022.

In Brooklyn, the New York Liberty are assembling a superteam.

And All-Star guard Sabrina Ionescu is as healthy and motivated as she’s ever been since joining the Liberty as the first overall pick in the 2020 draft.

A Big 3 consisting of Jones, Stewart, and Ionescu would transform the Liberty into an automatic contender for the championship, with the goal of hoisting the franchise’s first championship banner.

“It’s my first offseason not rehabbing, and I could say it’s the first offseason that I’ve been able to map out and know exactly what it’s going to look like and not have any obstacles of surgery procedures, you know, whatever that looks like,” Ionescu told The Post before the Jones deal. “Therefore, it has been exciting…. And now that I’ve returned to training, I’m beyond ecstatic; let’s hit the ground running!”

Game 1 of the first round of the 2022 WNBA Playoffs between the New York Liberty and the Chicago Sky at Wintrust Arena on August 17, 2022 in Chicago, Illinois.

In her third WNBA game, Ionescu suffered a Grade 3 left ankle sprain and missed the remainder of the COVID-19 “wubble” season. The native of Oregon underwent ankle surgery in November 2020, and the issue lasted throughout her 2021 season and subsequent offseason. The injury and recovery of Ionescu taxed her patience. She then revealed to Rich Kleiman of Boardroom that she returned to the court immediately after ankle surgery.

Ionescu stated that her first two years as a professional basketball player did not go according to her expectations, specifically because she was drafted in the midst of a pandemic and played in a bubble. Last season, however, it felt like everything was back to normal, with us having a great fan base in New York and, you know, being able to play at Barclays.

A “typical” season is one way to characterize it. Others may argue that Ionescu had a breakout season in 2022, when she averaged 17.4 points, 7.1 rebounds, and 6.3 assists and was named to the All-WNBA Second Team.

Sabrina Ionescu, guard for the New York Liberty, takes a shot during Round 1 Game 3 of the 2022 WNBA Playoffs on August 23, 2022 at the Barclays Center in Brooklyn, New York.

Ionescu won gold with Team USA at the FIBA Women’s World Cup in Australia in October. Ionescu spent some well-deserved time off after returning home and engaged in some of her favorite off-court pastimes.

I obviously took some time off after the World Cup to allow my body relax and recover,” Ionescu explained. “I believe I’ve traveled a bit more and honestly just devoted a bit more time to things outside of basketball — spending time with family, being able to go home and continue to work out, etc. … I don’t have to worry about needing to rehab or train in order to become healthy.

“I’ve been practicing a lot of yoga, hot yoga, and pilates, which has been quite enjoyable…. I adore swimming and riding. I also walked for the first time because I was unable to do so during my leisure time [during rehabilitation]. During the offseason, I’ve been able to return to my normal everyday activities without any stress.

Ionescu is preparing for her fourth season in the WNBA while simultaneously focusing on her different business endeavors.

In November, she was included in the Forbes 30 Under 30 List 2022 in the sports category, recognizing her extensive list of endorsements and investments in Buzzer Media and Nex. She also collaborates closely with Kevin Durant as an ambassador for Boardroom and a strategic partner with Durant’s and Kleiman’s Thirty Five Ventures.

“It’s more of a mentoring opportunity,” Ionescu explained. “I have a close relationship with the coaching staff. There are the university and the team. Therefore, I wished to continue seeking opportunities to give back.

“I’ve been able to return to the squad, speak with the players, and basically serve as a resource for them for anything they require. It has not been excessive thus far… But I was mostly seeking the opportunity to serve as a sounding board or in any other capacity that the players might require.”

The Post chatted with Ionescu on the day that WNBA champion Brittney Griner was exchanged for convicted weapons dealer Viktor Bout in Russia. Griner, a member of the Phoenix Mercury, was held for nearly ten months in Russia following her February arrest at an airport in the Moscow region on drug smuggling accusations.

The WNBA and its players, including Ionescu, made public appeals and calls to action for her release.

Ionescu stated, “I think it says a lot that every single team in the league, every single player, and every single organization stood behind and did everything we could to use our voice and platform to bring awareness, educate, and bring it home.”

“She has been there for many years. And I doubt many players and leagues would continue to place her at the forefront of what they were attempting to do. Therefore, I believe it speaks volumes about who we are and what we stand for in the WNBA.”

»Why this summer was different than any previous, according to Sabrina Ionescu«