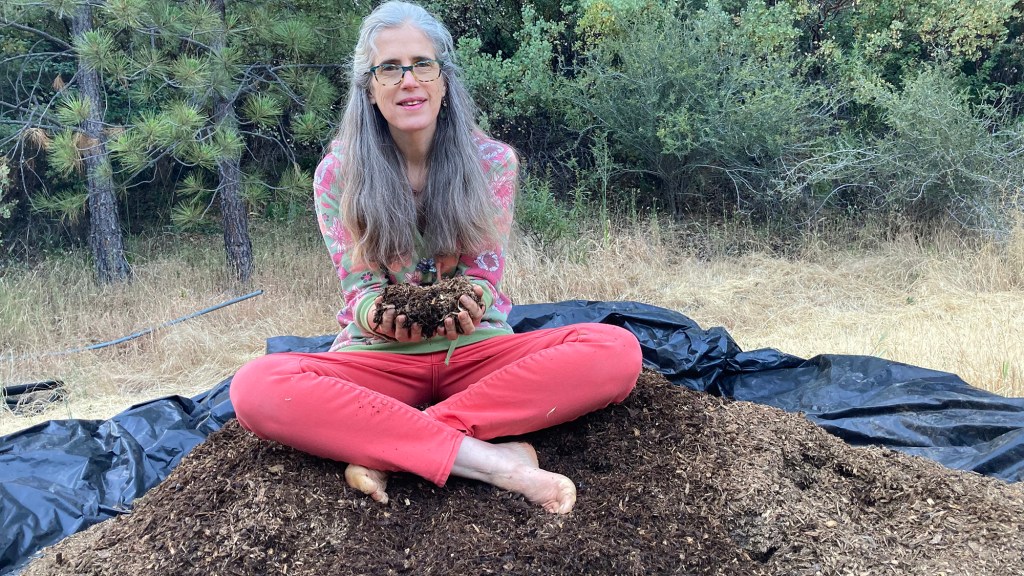 Robert Cantisano was regarded across his home state of California for his pioneering efforts in the field – and on the fields – as the godfather of organic agriculture.

When “Amigo Bob” died his long fight with cancer in December 2020, his wife Jenifer Bliss was left to carry out his dying wish to be composted rather than buried or cremated.

“He loved the earth so much that he wanted to be composted,” was written on the exterior of the recyclable cardboard shipping container he used as a coffin.

Bliss had booked Cantisano at Recompose, the world’s first human composting company near Seattle, Washington, and it was now her responsibility to transport him there.

Poor midwinter weather and the spread of COVID-19 prevented her from carrying out her original plan to drive her spouse to the destination. She told The Post, “If you’ve seen the scene in Little Miss Sunshine where they drive around with their deceased grandfather in the back of the van, I was going to do the same thing.”

Jennifer Bliss collaborated with Recompose to turn her husband’s body, organic farming pioneer Bob Cantisano, into compost, which she then used to plant flowers in the gardens of loved ones.

Bob was instead collected and sent to Recompose, where he became one of the first ten Americans to be composted.

New York became the sixth state in the United States to legalize the practice on December 31, when Governor Hochul signed NOR into law, following Washington, Colorado, Oregon, Vermont, and California.

There are currently no companies in New York that offer NOR, but that is expected to change due to the success of Recompose.

The wording on Cantisano’s casket, which was made from a repurposed shipping container, represented his commitment to the environment and composting.

Recompose, founded in 2017 by CEO Katrina Spade, “organically reduced” its first body in December 2020, three years later. Today, Recompose has over 1,200 pre-booked clients for when they die away. And while the numbers continue to rise, Spade is realistic about the proportion of those who will contemplate NOR. “We know that human composting is not for everyone, but for gardeners, environmentalists, and those who don’t want to be cremated or buried, turning into soil is very meaningful,” she says.

“Recompose is a new option, and we’ve been in need of new funeral services for quite some time.”

The NOC procedure is basic.

The corpse is placed in a reusable container and covered with hay, straw, and wood chips, creating an ideal environment for bacteria and microorganisms to flourish and begin the decomposition process. After approximately 30 to 60 days, the bones will have completely decomposed into soil, and any remaining bone fragments will be treated by a cremulator, the same device used in conventional cremations.

A body that undergoes NOR typically yields approximately one cubic yard of nutrient-rich compost. Relatives can take it home or contribute it to improve flower beds or assist plant trees in a number of locales, including Bell’s Mountain, a 700-acre land trust in southern Washington linked with Recompose.

Jenifer Bliss brought all of Amigo Bob back with her by hiring a truck from U-Haul and driving back to California from Washington. “We placed a large piece of plastic on the floor of the truck and then loaded Amigo’s compost with a forklift,” she explains.

Although recently legalized in the state of New York, “green” funerals have the potential to revolutionize the burial industry and minimize the enormous amount of environmental trash generated by cremation and conventional interments.

On her way back, she stopped at the homes of friends and former clients to plant flowers using Amigo Bob’s compost. Additionally, she left some beneath a tree along the Sacramento River, a site her late husband cherished.

Then, upon returning home, she stated, “I now had this compost pile in the driveway.”

Friends would grab a handful of Amigo Bob for their plants, and the remainder was dispersed across their farm and beneath their favorite tree in the garden. Bliss states, “In this sense, Amigo’s body continues to live.” “Not as he once was, but something new and revitalizing that is nourishing the soil, the plants, and the future.”

People like New Yorker Bernard O’Brien are eager to embrace composting after death for just these reasons. The 65-year-old native of Brooklyn Heights had previously chosen to donate his body to New York Medical College, but after researching NOR, he now wishes to be composted as well. “When you donate your body to [research], they will normally use it for two years before cremating it for free and returning the ashes to your family. But I need them to do this immediately,” he says.

“I simply appreciate that the body is returned to the earth. Perhaps I would find myself on a magnificent nature preserve, where I could gaze up at the bees and the flowers and perhaps see my loved ones. It has a great deal of attraction.”

The book by Elizabeth Fournier has become the bible of the green burial movement.

While O’Brien, like Governor Hochul, was raised a Catholic, his church is one of the minority that rejects the concept of NOR as an improper way to deal with the dead.

Kathleen Domingo, executive director of the California Catholic Conference, stated in September 2022 that human composting “reduces the human body to a disposable commodity.”

New York Catholic Conference colleagues on the east coast were considerably less reserved. We feel that a large number of New Yorkers would find this planned composting/fertilizing approach, which is more suitable for vegetable trimmings and eggshells than for human bodies, to be at best unsettling.

Church endorsement may simply be a matter of time for Catholics who support the concept. In fact, the Church did not permit cremation until 1963, despite the existence of crematories in the United States since 1876.

Bernard O’Brien, a native of Brooklyn, has decided to donate his body to science, followed by composting. “ “I simply appreciate that the body is returned to the earth. Perhaps I’ll wind up on a gorgeous wildlife preserve,” he remarked.
Stephen Cribb

In addition to the Church, certain funeral professionals, who are clearly concerned about a change in the burial status quo, have also voiced their disapproval of human composting. In May of last year, a longtime Staten Island funeral director told the Post, “We would do whatever the law allows.” “I personally find it horrifying.” Unsurprisingly, human composting bills were recently defeated in Hawaii and Maine.

Elizabeth Fournier is the proprietor of Cornerstone Funeral in Boring, Oregon, and the author of “The Green Burial Guidebook.” In contrast to industry holdouts, she feels that any opposition to NOR is rooted in archaic burial practices on the one side and a funeral business safeguarding its own interests on the other. “Flame cremation had a sluggish beginning. It was viewed as savage and was not a popular option. “However, marijuana is now legal in all fifty states,” adds the woman known as The Green Reaper.

“Religious and cultural cultures that have a problem with NOR argue that it lacks respect for the human body. They believe that grandma is being put into the compost pile, or that the human body is becoming nothing more than dirt,” continues Fournier.

After his death in 2021, Archbishop Desmond Tutu decided for aquamation, a method that liquefies human remains using water and potassium hydroxide.

As their creator, mortician and author Caitlin Doughty says, the mission of Order of the Good Death, an organization dedicated to promote more happy and ecological death experiences, is to remove the anxiety and misunderstanding around human composting. “The idea that you will die and your body will decompose is terrifying to most people, so I don’t blame anyone for labeling this a difficult conversation,” she explains.

“Despite this, the response to the concept of human composting has been overwhelmingly positive, and we’re honestly shocked that legislation has already been introduced in six states, given how slowly the funeral industry adapts to change.”

Composting is not the only environmentally friendly option to conventional burials or cremations. After his death in December 2021, the Nobel Peace Prize winner Archbishop Desmond Tutu underwent alkaline hydrolysis (also known as aquamation) in early 2022. Aquamation accelerates the liquefaction of the body by using a mixture of potassium hydroxide and water; the surviving bones are then dried to ash. Aquamation uses approximately 90 percent less energy than traditional flame-based cremation, with identical outcomes.

Currently, just three states (Washington, California, and Indiana) prohibit burials on private property, while nine (including New York) permit it with the presence of a licensed funeral director.

There are no state laws requiring caskets, and “natural burials” are increasingly gaining popularity. Typically, bodies are wrapped in shrouds or placed in biodegradable coffins before being buried, allowing nature to take its course once the deceased is buried.

All of this composting, natural burials, and aquamation is mostly unregulated, which is precisely why the Green Burial Council exists. The non-profit is responsible for overseeing and evaluating the funeral directors, houses, and services that claim to be ecologically friendly and open to human composting.

In addition to giving back to the environment, NOR can be considerably less expensive. The typical cost of a funeral in the United States is currently between $7,000 and $10,000, depending on the quality of care, cost of the casket, and location, according to Parting, a website that compares funeral homes. In New York, for example, the majority of residents spend around the top of the price range.

Caitlin Doughty, an author and mortician, operates the Order of the Good Death, an organization that demystifies composting and alternative burial alternatives.

Recompose charges $7,000 for a natural decrease, while another Washington-based company, Return Home, provides the same service for $4,950.

NOR is more environmentally friendly than traditional funerals and productions, in addition to being less expensive. “Human composting saves over a metric ton of carbon per person,” says Katrina Spade of Recompose, which will shortly establish a second location in Denver. “However, it is also a novel way to consider our mortality. We are literally a part of the forest. “You are not permitted to do so if you are cremated.”

Cremations, which have surpassed burials as the most popular end-of-life option in the United States over the past decade and now account for 57.5% of all dispositions, are extremely energy-intensive, emitting approximately 250 pounds of carbon dioxide per cremation – the equivalent of a 600-mile car journey.

In contrast, burials are arguably worse. In addition to the hundreds of thousands of tons of lacquered wood, steel, and other metal caskets that are buried annually, more than four million gallons of carcinogenic embalming fluid will also be buried with them, further polluting the land.

Space is also a factor.

Even though the United States has a relatively low population density, there is a limited amount of land accessible for burials due to space constraints in more crowded towns and areas.

This is why, according to Jennifer Bliss, NOR makes perfect sense. She states that this is what the earth has been doing with dead plants and animals long before humanity became ‘civilized.’

“Composting our bodies is a way of giving back, not only to the planet, but also to future generations, not only of humans, but of all life.”

»Why “green burials” and human composting are the newest trends«