Skip to content
Go Home «» News «» Breaking News «» Why does the Jets’ loss make you wonder how much progress they’re actually making? 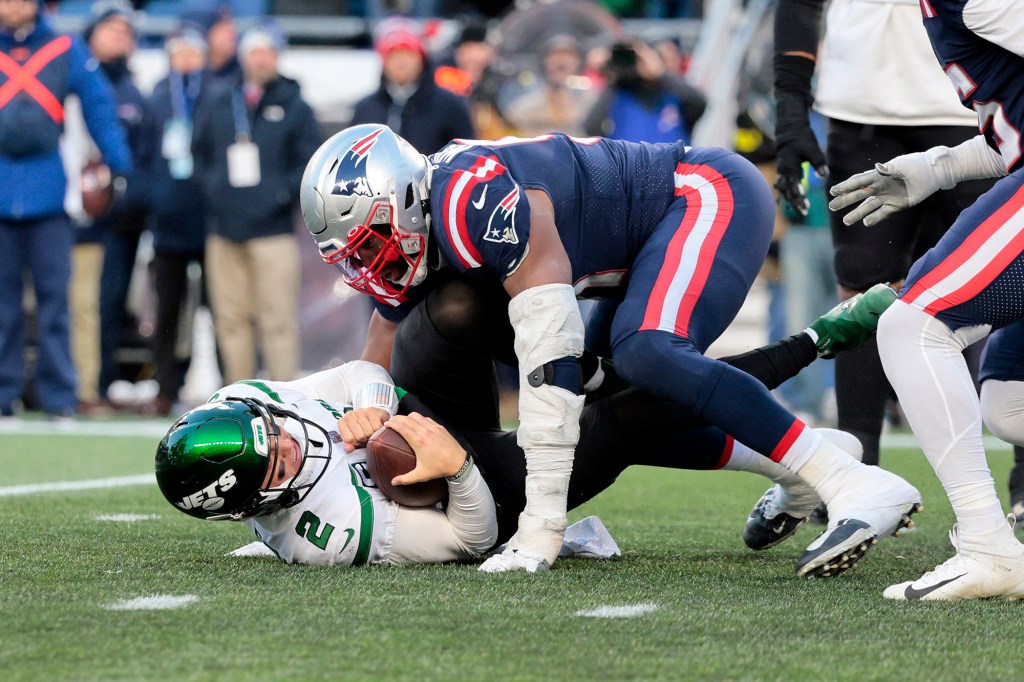 Possibly Sunday was just a major speed bump in the road for Zach Wilson.

Perhaps the 23-year-old will figure this out, and the two losses against the Patriots this season will serve as valuable learning lessons. He is, after all, just in his second season.

But after a disastrous performance against the Patriots in which Wilson went 9-for-22, passed for 77 yards, lacked confidence in his play, and failed to accept responsibility for the defeat (10-3), it becomes increasingly likely that Wilson will not be the Jets’ quarterback of the future.

It would be a tragedy not only for Wilson, but for the whole Jets team, as it would render this season’s growth and enthusiasm nearly useless. On Sunday, prior to the Patriots’ game-winning punt return, the Jets’ defense repeatedly bailed out the offense, demonstrating their superiority. Breece Hall, a talented young running back, will return from an ACL rupture next season, which will be a challenge to overcome. Garrett Wilson, their receiver, possesses exceptional ability.

However, without a quarterback, where do they stand?

Zach Wilson stated that, despite completing only nine passes for a Jets offense that scored three points, he did not think he let down the team’s defense.
Charles Wenzelberg/New York Post

And escaping mediocrity in the NFL is not a simple task.

It involves drafting a quarterback outside of the top 10 or getting one through free agency or a trade. Consider the Colts after Andrew Luck’s departure, who have cycled through Jacoby Brissett, Brian Hoyer, Philip Rivers, Carson Wentz, Matt Ryan, and Sam Ehlinger without a postseason victory. Consider the Cleveland Browns, who were supposed to be so promising until everyone recognized that Baker Mayfield wasn’t the solution. Consider the Broncos, who can’t even get Russell Wilson right.

Perhaps the Jets will improve. Perhaps they will succeed with Wilson.

But the NFL is a difficult league to succeed in, and it is nearly impossible to win without the proper quarterback. Jets supporters have every right to enjoy this season to the fullest extent possible. At 6-4, it is still possible for the squad to make the playoffs for the first time since the 2010 season, which would be a wonderful moment.

Not only did Wilson play them out of a win on Sunday, but when reporters in Foxborough questioned him whether he let down the defense, he said, “No.” This is unacceptable from a quarterback in this city. Whether that is acceptable in the Jets’ locker room is unknown (and it shouldn’t be).

Sunday, the Jets punted more than they gained first downs. Given the opportunity to drive down the field and take the lead with 1:45 remaining, coach Robert Saleh was cowardly by opting to run the ball instead of allowing Wilson to take charge, and who could blame him? The offense gained two yards in the second half. Two.

Yes, their playoff place is currently in jeopardy. However, the long-term consequences are far more serious than the short-term heartache.

Ben Simmons goes off as the Nets defeat the Grizzlies upon the homecoming of Kyrie Irving.

RJ Barrett and Julius Randle struggle in a sloppy Knicks defeat to the Suns.

The Giants’ Joker is exhausted.

This was not a good Sunday for the Giants: a 31-18 home defeat to a below-.500 Lions club, the end of Daniel Jones’ streak without an interception due to a lack of flair, and injuries to four players with a short week ahead.

The hopeful viewpoint is that bad weeks occur. The Giants are currently 7-3 and had not suffered a horrible loss until Sunday.

With two games remaining against the Eagles, they are still in postseason contention and divisional supremacy is still a possibility. The Giants can only afford to lose Sunday’s game if they want to contend for the NFC East and make an impact this season. Five of their last six games are against divisional opponents, including four in a row beginning at Dallas on Thanksgiving. At least in one regard, it was an excellent moment to release a dud.

It’s still possible for everything to go apart, as everything is still up for grabs. The Giants have yet to win a game by more than one touchdown, a statistic that demonstrates their ability to close out games in the fourth quarter, but also lends credence to the notion that they are not as good as their record indicates, especially when it comes to advanced statistics, which do not believe in this team in the slightest.

Sunday’s performance, in which the Giants resembled the club we believed they’d be before to the season far more than they have thus far, did nothing to dispel the remaining worries. However, a pair of solid showings against their divisional rivals would go a long way toward doing so.

Particularly Jones must improve when the opposition is trying all possible to halt the running game and forcing him to make a play. Offense in football is fundamentally about finding free space and placing the ball where the defense is not. It is OK to rely on your rushing game, but it is a deadly mistake if you cannot pass the ball when the opposition sells out to stop the run.

On Sunday, this tactic proved fatal for the Giants, and you can guarantee that subsequent opponents will attempt to duplicate it. Jones has benefited from the fact that the Giants have been in close games all season, meaning that Brian Daboll has seldom needed to count on his quarterback. On Sunday, Jones retreated 44 times, a season high. That was no accident that it was his poorest game of 2022.

Daniel Jones trying 44 passes did not end well. Still, the Giants have a 7-3 record.
Robert Sabo

The good news is that none of this was particularly secret prior to Sunday — Dan Campbell was not breaking new ground — and the Giants won seven of their first nine games. Rebounding from a loss of this nature is a bit of a different circumstance, especially on short rest, but the Giants have demonstrated the capacity to do so. They have not lost consecutive games, which is more evidence of the team’s resilience under Daboll. Now is not a good moment to begin.

Wales of a contest

If you thought eight years between World Cups is long, try waiting 64.

It has been that long for Wales, the United States’ opponent in its opening group stage game on Monday afternoon (2 p.m., Fox). And if you believe that to be a sign of weakness, you are mistaken.

The Welsh reached the Round of 16 at Euro 2020 (held last summer) and the semifinals of the same competition in 2016. They also tied the United States 0-0 in a friendly in November 2020. Wales is a minor underdog in this match according to the odds, but the United States’ chances of advancing in the World Cup rely on their performance in this match.

At first appearance, England appears to be the favorite in all three of its Group B matches. Iran is expected to be the underdog in all three of its upcoming matches. This does not imply that England will go 3-0 or that Iran will go 0-3. However, if either the United States or Wales can earn three points in this match, they will be in a great position to move to the knockout stages.

What’s concerning about this match is not only the skill of the Wales squad — though Gareth Bale up front gives enormous star power, even at the age of 33 — but the fact that Wales’s style of play is well-suited to achieving a victory against the United States.

Wales will likely field five defenders, let the United States — headed by new captain Tyler Adams — to hold the ball, and attempt to score on the break. This is precisely the type of game the United States has failed to win in previous years. Their offense is more suited for transition play than for penetrating a defense. This is mainly due to the lack of a star striker, a situation that won’t be resolved until this afternoon.

Mid-October quadriceps strain suffered by top midfielder Weston McKennie has been added to the list of possible concerns. He assured reporters before to the game that he feels OK, and it is anticipated that he will participate. It is unclear, though, if he will play 90 minutes or be at full effectiveness.

Identical to right back Sergio Dest, who has struggled with muscular exhaustion, stated last week that he is fit to play.

And Wales is a squad with more skill than you may expect.

“When I look at Wales’ group, it’s essentially a Premier League side,” said U.S. coach Gregg Berhalter. “[Winger] Daniel James scored the other night against Manchester United; [midfielder] Harry Wilson is a superb player; [striker] Kieffer Moore; [center back] Neco Williams; [forward] Brennan Johnson; Gareth Bale; [center back] Ben Davies. I believe it to be a very excellent and tough team. They have participated in international events previously, so they know what to expect.”

Gareth Bale is the most recognizable member of a Wales team that is stocked with Premier League quality.
Getty Pictures

Obviously, coaches constantly pump the tires of their opponents, but Berhalter is correct in this instance. The majority of the players on the field against the United States are Premier League mainstays, with the exception of Bale, who has transferred to the MLS. And like the United States, this is a hungry team eager to seize the chance at hand.

On paper, this will be a difficult match, and it would not be unexpected to see the United States win, lose, or tie. A draw would be survivable, but gaining a point against England would be crucial. Without a dramatic shock victory versus England, the United States would likely be eliminated from the World Cup with a loss.

Additional information on the World Cup:

• Ecuador’s 2-0 victory over Qatar was humiliating for the home team, whose players were apprehensive, whose spectators departed early, and whose emir surrounded himself with autocrats during the game. It does not appear unlikely that Qatar will be the poorest World Cup participant since North Korea in 2010. Zaire in the 1974 World Cup is largely regarded as the poorest squad to qualify for the tournament, having lost all three group stage matches by a total score of 14-0, including a 9-0 loss to Yugoslavia. Due to the country’s appalling human rights record, doubts regarding how they won the bid to host, and FIFA president Gianni Infantino’s awful hour-long address in defense of the entire event prior to Sunday, Qatar will not receive much compassion if this scenario occurs.

• In addition to the USMNT, the Netherlands will face Senegal and England will face Iran on Monday. The Three Lions have a significant advantage against the Iranians. Senegal, which has a chance to advance from Group A, will face a formidable opponent in the Louis van Gaal-led Netherlands. The most intriguing aspect of the game will be how the underdogs perform without Sadio Mane, their star attacker who is out due to injury.

»Why does the Jets’ loss make you wonder how much progress they’re actually making?«