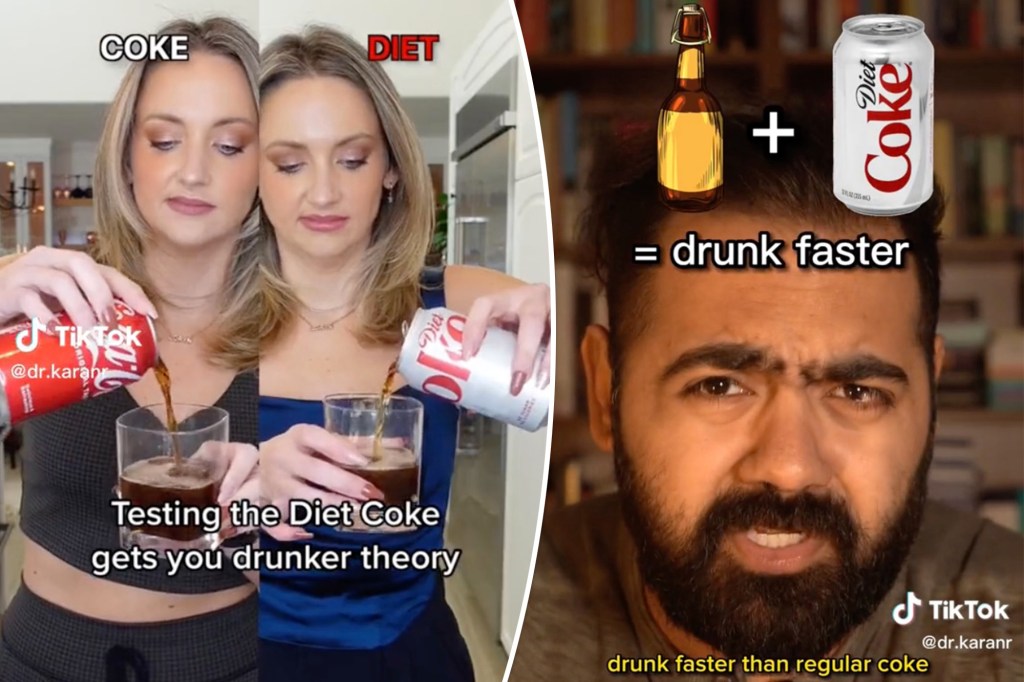 A British physician has gone popular on social media after demonstrating that diet mixers cause intoxication far more rapidly than full-sugar alternatives.

Why does combining Diet Coke and alcohol result in faster intoxication than regular Coke? Dr. Karan Raj asks at the beginning of his 1.2 million-view TikTok video that has generated a great deal of excitement among drinkers.

“It has nothing to do with diet mixers, but rather with the fact that the sugar in ordinary Coke causes the stomach to empty more slowly into the small intestine, so reducing the absorption of alcohol into the bloodstream,” Raj elaborated.

“It’s the same theory that explains why you become drunk faster on an empty stomach because there’s nothing to slow down the alcohol,” the doctor explained as a graphic flashed on the screen.

Raj’s instructional video was juxtaposed with footage from Twitter user Loryn Powell, who wanted to test the doctor’s claim.

On the first day, she drank four glasses of hard liquor with full-sugar Coke before doing a breathalyzer test 30 minutes later, which revealed a blood alcohol concentration of 0.061.

On the second day, Powell drank four glasses of whiskey mixed with Diet Coke and then took the same breathalyzer thirty minutes after her last drink.

She had a blood alcohol level of 0.086, which appears to validate Dr. Raj’s claims in his TikTok video.

He utilized a diagram to demonstrate his explanation. His video received 1,200,000 views.

Viewers responded enthusiastically to the ad, with many desiring to become inebriated rapidly during the holiday season.

“There are so many opportunities with this information,” quipped one.

“From now on, Diet Coke will only be consumed on nights out!” exclaimed another.

This is not the first time Dr. Raj has gone viral on TikTok, as the expert frequently shares offbeat information about the human body and behavior.

Raj’s explanation video was juxtaposed with footage from Loryn Powell, a Twitter user who chose to test the doctor’s claim.

Last year, Raj disclosed the “most deadly sex position” in a viral video, alleging that reverse cowgirl had taken numerous men to the hospital after their penises were crushed by their partners’ pelvic bones.