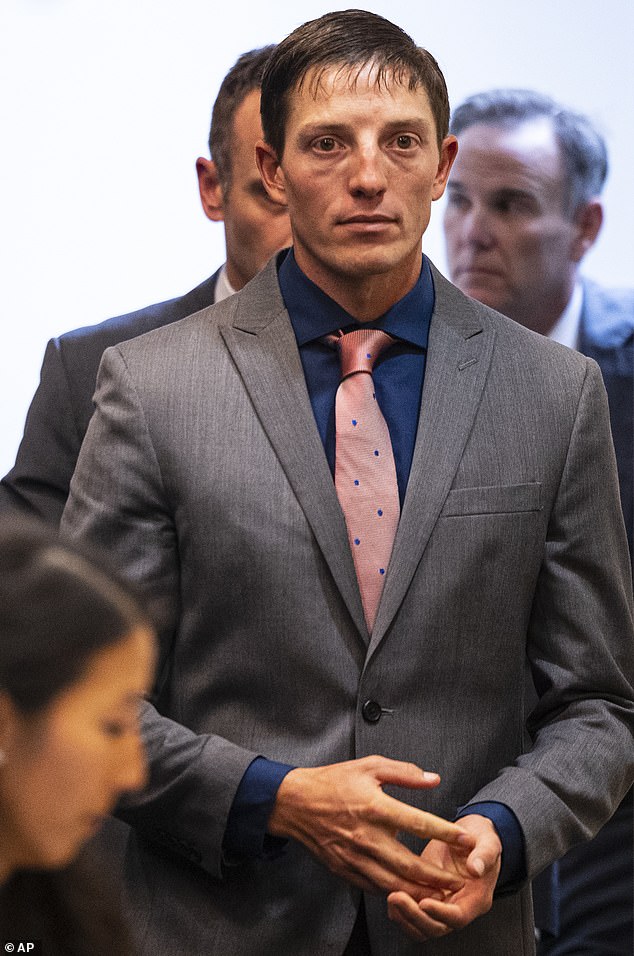 A former Michigan police officer will stand trial for murder for fatally shooting a black man in the back of the head during a struggle over his Taser.

Christopher Schurr, 31 years old, was charged with second-degree murder in June for fatally shooting Patrick Lyoya on April 4 during a traffic check.

Since then, he has been sacked from the Grand Rapids Police Department, despite his insistence that he acted in accordance with department policy and that his use of force was justifiable.

Schurr asserted that Lyoya was in charge of his Taser when he shot Lyoya. Attorneys for the defense stated the officer feared for his safety.

However, Lyoya’s family contends that white officer Schurr failed to de-escalate the situation after the 26-year-old black male departed the scene without a license.

Lyoya, a native of the Democratic Republic of the Congo, appears bewildered and wonders, “What did I do?” as he exits his vehicle on a rainy street near the intersection of Griggs and Nelson SE. The officer repeatedly requests a driver’s license and instructs Lyoya to return to the vehicle.

Lyoya attempts to physically fight Schurr when the officer orders him to “Drop the Taser” prior to shooting him at point-blank range.

Judge Nicholas Ayoub wrote Monday that there is little doubt that Lyoya’s death was caused by the gunshot wound to the head inflicted by the defendant.

The clear description of the incident in the video strongly suggests that the defendant knew he was aiming the gun at Lyoya’s head and fired at close range, which is sufficient to establish probable cause to conclude that the defendant acted with malice.

He added, “The only truly disputed issue in this case is whether the defendant’s activities were legal.”

Ayoub stated in his decision to proceed with a jury trial that Lyoya’s homicide would be justified under the law “only if the defendant honestly and reasonably believed that his life was in imminent danger or that he needed to use deadly force to protect himself from such damage.”

Capt. Chad McKersie of the Grand Rapids Police Department testified in court that it was unclear whether Patrick Lyoya was simply attempting to flee or was prepared to attack the defendant.

As a result, Ayoub questioned whether the killing was justifiable under Michigan’s “fleeing felon rule,” which permits the use of lethal force to keep an escaped offender from evading arrest.

According to the law, he explained, the use of lethal force is permissible provided evidence demonstrates that a felony was actually committed, that the fleeing suspect against whom deadly force was used was the perpetrator, and that the use of deadly force was ‘necessary’ to capture the suspect.

Ayoub adds that in his testimony, Captain McKersie “provided an example of additional equipment and techniques available to the defendant at the time of the event, such as pepper spray or the use of a flashlight, baton, or radio to strike the suspect.”

But ‘Captain McKersie is ultimately of the judgment that the defendant followed his training policy based on the totality of the required conditions.’

The judge decided, “There is at least some evidence from which a person of average intelligence may determine that the defendant’s back-of-the-head killing of Lyoya was not reasonably necessary to prevent his escape.”

Schurr asserts that he stopped Lyoya on April 4 for having license plates that did not match the vehicle.

The resulting altercation was captured on film from the dashboard camera of the officer’s squad car, his body-worn camera, and shortly thereafter, a nearby surveillance camera.

Lyoya exited his vehicle on the wet day and asked the officer why he was being pulled over while Schurr repeatedly requested his license, as captured by Schurr’s body camera.

“I’m pulling you over; do you have a license?” Do you possess a valid driver’s license and speak English? Schurr queries.

In the video, Lyoya affirms that he speaks English and opens the driver-side door while conversing with his passenger.

The individual then closes his door, turns his back on the officer, and seems to leave.

Lyoya is shown pushing back against the officer and then running until he is taken down by the cop.

As Lyoya’s passenger exited the vehicle, he and the officer engaged in a scuffle in front of multiple residences.

The cop continually commands Lyoya to “let go” of his Taser, eventually yelling, “Drop the Taser!”

The recordings do not reveal whether or when Lyoya attempted to take the officer’s Taser, but the officer can be heard yelling at him to get go of the device, which was deployed twice but did not strike anyone, according to officials.

The officer’s body camera abruptly turns off at this point.

Police Chief Eric Winstrom indicated that it takes three seconds to deactivate the body camera by pressing a button, and he believed the pressure from Lyoya’s body was the cause.

Nonetheless, additional video footage from the neighbor’s doorbell security system, the dashcam in the officer’s vehicle, and a bystander’s cellphone captures the incident from a variety of perspectives.

According to Winstrom, the struggle over the Taser lasted about 90 seconds. In the last moments, the cop was kneeling on Lyoya’s back to restrain him while on top of him.

According to my viewing of the video, Taser was used twice. Winstrom told reporters the Taser did not make contact. Mr. Lyoya was afterwards shot in the head. ‘However, this is the only knowledge I possess.’

A home video camera in the area captured the sound of the police shooting Lyoya in the back of the head.

A subsequent autopsy confirmed that Lyoya died of a single gunshot wound to the back of his head.

In a report, Dr. Werner Spitz noted that there was “extensive hemorrhaging” in the brain and that a large-caliber bullet had traveled up and to the right side of his skull and lodged near his right temporal body.

Spitz also stated that fragmentation of the skull suggests that the unidentified police officer’s gun was pressed against Lyoya’s head when it was fired, noting that Lyoya was “conscious and aware that a gun was being held to the back of his head” prior to being fatally shot.

Spitz stated at the news conference that death occurred in a matter of seconds, telling reporters that ‘when the brain is injured in any way, the entire brain will swell and death will ensue’

In contrast to the Michigan police department’s claim that he fought back against the officer during the traffic stop, he discovered no other injuries consistent with a struggle.