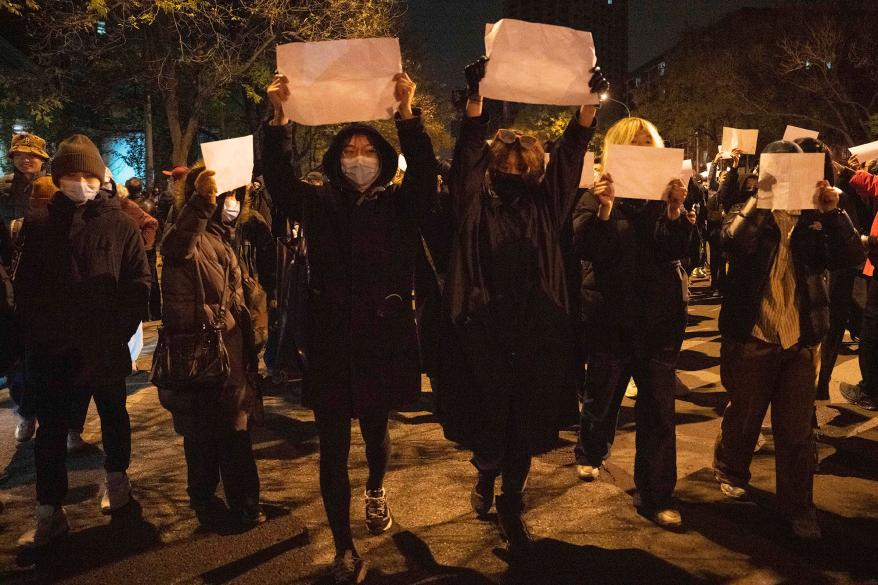 Monday, the Biden administration stated that Chinese protesters are correct to demand an end to draconian COVID-19 lockdowns, but did not endorse widespread calls for Beijing’s autocratic President Xi Jinping’s resignation.

Videos published over the weekend depicted massive protests across China, representing the most significant challenge to Communist Party rule in more than three decades, with crowds in Beijing and Shanghai chanting that Xi should resign.

Some footage depicted protests devolving into near-riots against the police, while in the epicenter of the pandemic, Wuhan, protesters reportedly removed fencing intended for lockdowns.

“We’ve maintained for a long time that everyone has the right to protest peacefully, both in the United States and around the world. This includes the PRC,” a representative for the White House National Security Council said in a statement, using the official abbreviation for China.

In its statement, the White House did not expressly criticize the conduct of Chinese authorities, but it did express support for the activists’ concern to Xi’s “COVID zero” policy, which aim to prohibit any transmission of the virus.

Chinese cities, notably Wuhan, lifted pandemic lockdowns as early as 2020, significantly earlier than the United States and other Western nations, but the development of the more contagious but less lethal Omicron variety triggered a retreat this year.

“We have stated that zero COVID is not a goal the United States is pursuing. As previously stated, we believe it will be extremely difficult for the People’s Republic of China to contain this virus using their zero COVID strategy, according to a White House statement.

“We are focused on what works, which includes utilizing public health strategies such as increasing immunization rates, including boosters, and providing easy access to testing and treatment.”

Apple is reportedly anticipating a shortfall of 6 million smartphones owing to work stoppages and protests at an iPhone plant in the Chinese city of Zhengzhou.

House Republicans intend to use their increased subpoena authority next year to investigate the extent of Joe Biden’s involvement in a pair of commercial ventures involving his family and Chinese government-affiliated firms.

This committee will determine if this president is compromised or influenced by foreign money. This month, incoming House Oversight Committee Chairman James Comer (R-Kentucky) stated at a press conference, “This is an inquiry of Joe Biden.”

House Republicans also intend to explore the theory that COVID-19 escaped from a Wuhan laboratory conducting dangerous coronavirus “gain of function” research. Last year, US intelligence officials determined that a lab leak in Wuhan was one of two “plausible” hypotheses for the beginnings of the pandemic, along with natural animal-to-human transmission, but Biden has said relatively little to pursue the topic since then.

According to documents retrieved from the first son’s abandoned laptop, Hunter introduced his father to the incoming CEO of BHR, Jonathan Li, in a hotel lobby, and Joe Biden later wrote college reference letters for Li’s children.

According to business registration records, The Journal reported that Hunter Biden’s “paid-in capital” for the establishment of the company was $425,000. BHR handles $2.1 billion in assets and plays a key role in the acquisition of overseas properties.

Throughout 2021, the then-press secretary of the White House, Jen Psaki, stated that Hunter Biden was still seeking to “unwind” his 10% ownership in BHR.

One week after the president’s virtual encounter with Xi in November 2021, Hunter Biden’s attorney Chris Clark announced that the share had been sold. However, online data indicate that Hunter is still interested. Neither Clark nor the White House provided additional details regarding the alleged transaction.

In 2016, BHR Partners was instrumental in negotiating the sale of a Congolese cobalt mine by American and Canadian firms to a Chinese company. Cobalt is a crucial component in the production of electric vehicle batteries, and the New York Times drew notice to the transaction last year, highlighting its significance.

Hunter Biden and his uncle, first brother James Biden, collected $4.8 million from CEFC China Energy in 2017 and 2018, according to a review of Hunter Biden’s laptop papers by the Washington Post. This company was viewed as a component of the “Belt and Road” foreign influence strategy of Beijing.

A May 2017 email regarding the CEFC cooperation stated that the “big man” was entitled to a 10% reduction. Tony Bobulinski and James Gilliar, both former Hunter Biden employees, named Joe Biden as the “major person,” and Bobulinski claims he met with Joe Biden in the same month to discuss the deal.

Despite evidence that he has interacted with Hunter’s associates from China, Kazakhstan, Mexico, Russia, and Ukraine, the president has denied making any money from his son’s international business deals. The White House says he stands by his 2019 claim that he has never even discussed the enterprises with his son.