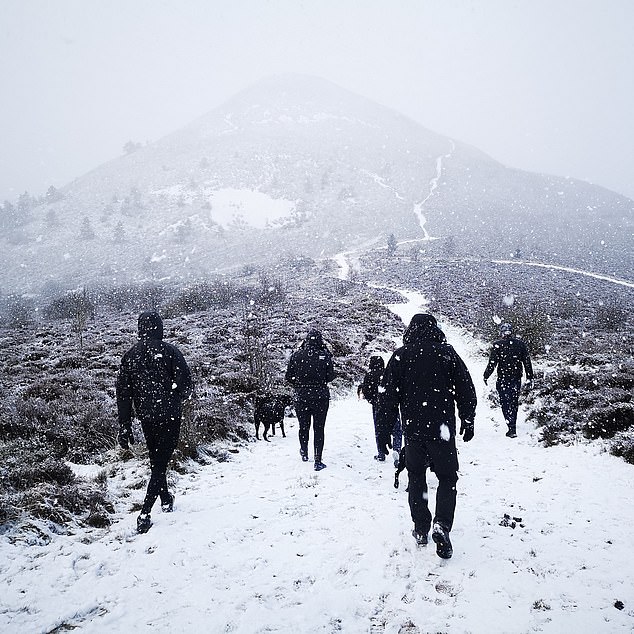 On Boxing Day, various regions of the country had snowfall, creating a “White Christmas” for some.

In Badenoch and Strathspey, the Met Office issued a yellow weather warning at 9 p.m. on Christmas Day, which was primarily observed in the Scottish Highlands.

The snow and ice warning has been expanded to include the majority of the Highlands and Islands.

Until tomorrow at 10 a.m., the Met Office has also issued an ice warning for the west coast of Scotland down to Manchester.

It has cautioned that ‘icy patches’ on untreated areas could increase the likelihood of accidents and injury. Travel difficulties might also affect Britons.

The alerts follow the agency’s announcement that Christmas was white in areas of Scotland and Northern Ireland, where snow fell yesterday.

This Christmas was officially a White Christmas, since five weather stations in the United Kingdom recorded sleet or snow today.

The Met Office recorded snowfall in portions of Scotland and Northern Ireland, despite the fact that the majority of the country saw damp weather.

The ice warning was issued from 6 p.m. on Monday, December 26 to 10 p.m. on Tuesday, with possible travel disruptions.

As Tuesday morning unfolds, wind and rain in the west will shift east and snow will fall across portions of the country.

Snowfall of up to 10 centimeters is anticipated in some areas of Scotland’s higher elevations (just under 4in).

The Met Office stated, “Wintry showers will persist through this evening, gradually dissipating overnight and into early Tuesday morning.

Overnight, accumulating snow will be concentrated throughout Highland and Grampian, with an additional 1 to 4 centimeters predicted above 150 meters, but patchy snow could fall at low levels, particularly in the far north.

Traffic Scotland has verified that gritters are out on the roads and that ice and snow are already present on a number of main roads, particularly the A82 and A87 in Invergarry, and has advised motorists to “prepare ahead.”

Black ice and snow have also damaged the A68 at Carter Bar and the A7 in Selkirk and Mosspaul in the Scottish Borders.

In the meantime, Boxing Day revelers in Britain had a dip in the ocean.

With activities in England, Wales, and Scotland, participants donned Father Christmas hats and bikinis and jumped into icy seas around the United Kingdom.

At the annual Boxing Day swim in Ventonor on the Isle of Wight today, there was a large turnout and large waves, while others strolled along Longsands Beach in Tynemouth in the North East of England.

This year was officially a White Christmas in the United Kingdom, as five meteorological stations recorded sleet or snow.

The Met Office recorded snowfall in portions of Scotland and Northern Ireland, despite the fact that the majority of the country saw damp weather.

»White Christmas in parts of Britain on Boxing Day«