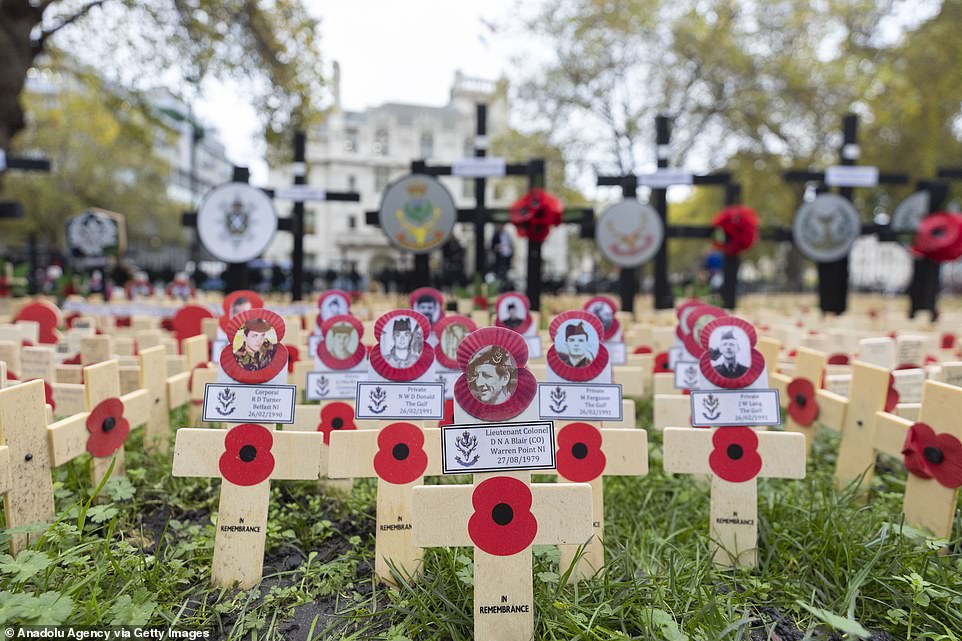 A two-minute moment of silence was observed at 11 a.m. on the anniversary of the conclusion of the First World War to honor those who have lost their lives in military conflicts.

Big Ben in London rang eleven times to commemorate the event after being mainly silent for five years owing to maintenance.

In the meantime, the Duke and Duchess of Gloucester are attending the Armistice Day service at the National Memorial Arboretum in Staffordshire, as well as ceremonies in London, Edinburgh, Belfast, and Portsmouth.

Yesterday, the Field of Remembrance in front of Westminster Abbey. The nation observed a moment of silence at 11 a.m. in memory of those who perished in military wars.

As seen in this photo shot yesterday, hundreds of wooden crosses carrying poppies have been placed on the green outside Westminster Abbey.

Farmers Fay and Abigail Johnson of Great Easton, Leicestershire, have painted 11 of their sheep with a poppy motif to commemorate Armistice Day.

This weekend, the sheep are expected to remain in their field so that churchgoers can view them.

The brief outdoor ceremony led by Legion Scotland National Padre Rev. Dr. Karen Campbell will be followed by the laying of wreaths prior to the firing of the One O’Clock Gun from Edinburgh Castle at 11 a.m.

Mr. Cleverly stated, “Since 1918, we have commemorated Armistice Day and given respect to the heroic men and women who fought for peace on our behalf.

“Yet as we honor our troops this year, a Russian aggressor has destroyed our calm.” In remembrance of the war dead of the past, we also recall Ukraine’s ongoing struggle for independence.

“The United Kingdom stands resolutely with our friends and allies in defense of freedom and democracy in Ukraine, and I am glad to stand shoulder to shoulder with a historic ally in Paris today,” he said.

According to the Foreign, Commonwealth & Development Office, they are likely to address the two countries’ support for Ukraine, coordinated efforts to increase energy security, and illegal migration.

In addition, plans for next year’s UK-France summit will be discussed.

In 1918, the Allies and Germany signed the Armistice in a train carriage in the Compiegne forest to end the First World War.

On the anniversary of the conclusion of the First World War, memorial services will be held across the nation, and a two-minute moment of silence will be observed at 11 a.m. to honor those who have perished in military wars.

In 1918, the Allies and Germany signed the Armistice in a train car in the Compiegne forest to end the First World War

»When is the two-minute silence? Honoring Armistice«