Skip to content
Home » News » Breaking News » What Men Can Do, A Woman Is Doing It Better 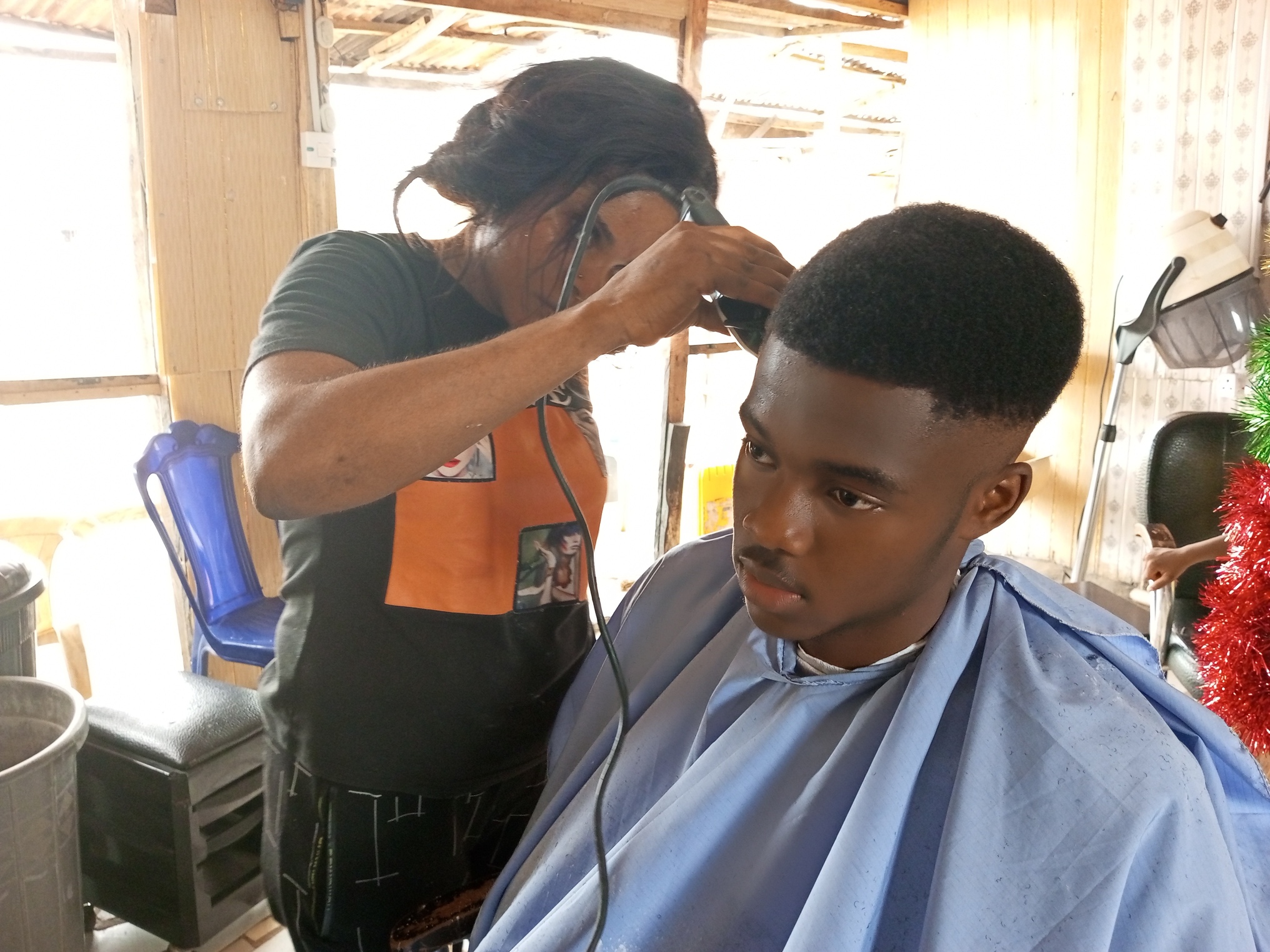 Thirty-seven-year-old Anita Omang, mother of three is not only courageous but also determined to excel in a business believed to be an exclusive preserve for the male folks.

With just a secondary school certificate, Omang sat around barbers’ shops in Kuje, one of Abuja’s area councils to learn the art of barbing.

“Sometimes I would sit around where a barber is working, and there I found myself growing interested in having the knowledge of how to make neat haircuts for men,” she recalled in an interview.

“I didn’t have the formal skills on handling a clipper to barb anybody, but watching the men do their thing I acquired barbering skills and I had confidence in myself with mental pictures of different haircut styles.”

Now an owner of a Unisex barbing salon, though without any form of assistance from the numerous government’s Women Economic Empowerment scheme reflected over her first haircut for a man.

“The day I decided to barb, I confidently engaged the clipper, gave a man a haircut and it was as if I had been barbing all my life,” she recalled.

As economic hardships bite hard with growing inflation, the mother of three says she makes as much as N7000 per week from her unisex salon and that is how she takes care of her family needs.

She has had to raise funds by herself to start her business despite series of schemes to support women entrepreneurs by the Nigerian government.

Realities with women’s endeavors have exposed the slack effect of the available funds to meeting the business needs of the women as most of them do not have direct access to the available funds across the ministries and agencies such as their abilities to access assisting capital that can expand their businesses and create economic stability .
Omang had worked as a hair stylist before venturing into a private enterprise of her own with a life-long dream of owning “a big salon where many people will be working for me and I will be paying them salaries.”

She started making hair for people as a kid, at age six.

“When I was six-year-old my mother would say, won’t you ever get tired of plating people’s hair and I would say when I grow up I want to own a big salon, but growing up, I struggled on my own to raise capital of about N500,000 to start up this unisex salon, I worked in about six beauty homes as a hair stylist where they paid me token of N40,000. Bit by bit I raised the capital for my own business,” she recalled.

Just like Omang, a lot of women in Nigeria in the informal sector rely on internal sources of capital, such as personal savings and funds from family and friends to start up their businesses.

In spite of this high population, women have continued to face increasing challenges ranging from lack of access to funding of their business right to ownership of property as well as other problems in contributing to the basic needs of the their families.

A small percent of women in Nigeria are engaged in income generating activities as revealed by the National Bureau of Statistics (NBS) report of 2019. The NBS revealed that 25.37per cent of women are making income whereas 74.63 per cent of them are not generating income.

The 2018 Survey of the Access to Financial Services in Nigeria also revealed that the national financial inclusion rate for women is 58.9 percent compared to 67.4 per cent for men, leaving a gender gap of 8.51 per cent.

A Deputy Governor of the Central Bank of Nigeria, Mrs Aisha Ahmad has described this gender gap in financial inclusion as worrisome, stressing that there is a need to develop strategies and initiatives for policy makers to deliberately implement policies that will bridge this gap

.
The budgetary allocation to Women Economic Empowerment in the approved 2022 increased by 101.61 percent compared to N51 billion in 2021.

Difficulties faced by women in accessing funds
While there are deliberate efforts by the government to improve the economic empowerment of women in Nigeria through several targeted programmes across the Ministries and agencies, Nigerian women still suffer from access to these funds.

In an  instance, For Nano-MSMEs to be eligible to get a loan via one of Small Medium Enterprise Development Agency of Nigeria, SMEDAN initiatives, the main requirement is usually to have a registered business. However, since many women-owned businesses are usually informal, this poses a great challenge to them accessing such loans and grants.

Likewise, most commercial financial providers require businesses to have proper documentation and be registered in addition to more stringent lending criteria and high interest before they gain access to loans.

It is obvious that the challenge to economic empowerment of women is no longer the absence of finance but accessibility of these funds remains the major problem confronting the growth of women’s enterprises .

Recently, the Director-General of SMEDAN, Dikko Radda called for reduction of bottlenecks to accessibility of funds for women in the informal sector. The women also lack access to loans like their male counterparts due to limited personal financial assets that can serve as collateral.

These collateral requirements by most financial providers play a significant role in excluding women from the formal credit market.