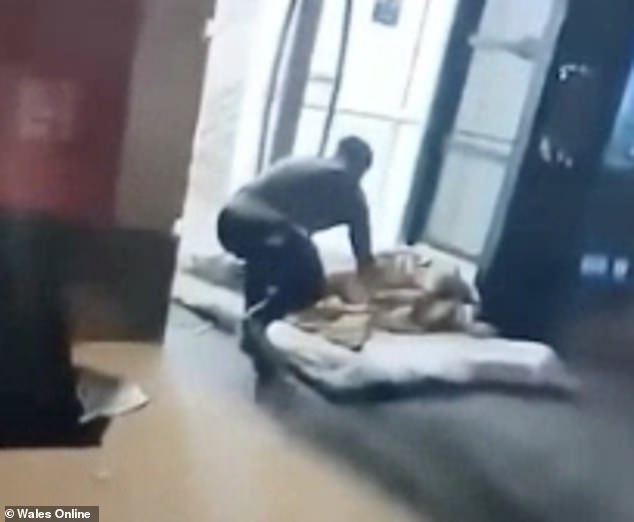 The club – which has a host of top international players including Alun Wyn Jones and Alex Cuthbert – described it as ‘totally unacceptable and not condoned by anyone associated with the Ospreys’.

Aubrey and Carson have since been allowed to carry on playing following an inquiry but have apologised and will now work with a homeless charity after admitting they let down their families.

Carson said: ‘Firstly, I would like to apologise to the person involved for my behaviour and lack of respect towards them.

‘Then I have to say sorry to my family, my friends, my teammates and the Ospreys and the supporters for the embarrassment caused by my actions.’

Aubrey said: ‘I want to say sorry to everybody for what happened and there are no excuses for my behaviour on that night.

‘I know how much distress and embarrassment it has caused everybody close to me and everyone involved with the Ospreys.’

The clip was apparently filmed in Cardiff city centre where a homeless person was sleeping in an office doorway.

It was posted on Matthew Aubrey’s Snapchat account and appears to show Carson lying next to the rough sleeper.

He then smiled at the camera before appearing to rub himself against the ‘vulnerable’ person on the floor.

The clip showed him wrapping his arm around the person then rubbing his hips in a mock sexual act.

It was filmed near the Hilton Hotel after the players travelled more than 40 miles from the Swansea-based club for a social occasion.

Scrum half Aubrey made his debut for the Ospreys in 2016 and previously played for the club’s academy and Swansea RFC.

Centre Carson, who made his Wales U20s debut in 2018, also plays for Wales Sevens as well as the Ospreys.

An Ospreys statement read: ‘The Ospreys can confirm that a full and thorough independent disciplinary process has been concluded in relation to the incident on March 7th, 2022, involving Callum Carson and Matthew Aubrey.

‘The Ospreys suspended both players with immediate effect after being made aware of the incident.

‘Carson, 23, and Aubrey, 24, were investigated separately and during those investigations accepted full responsibility for their actions and demonstrated remorse for their behaviour.

‘Both players are fully aware that their actions were totally unacceptable and of their responsibilities to the Ospreys and the wider community who they represent.

‘The recommended disciplinary sanction has been imposed on them and in addition they will undertake volunteer work with The Wallich Welsh charity helping people who are homeless.’