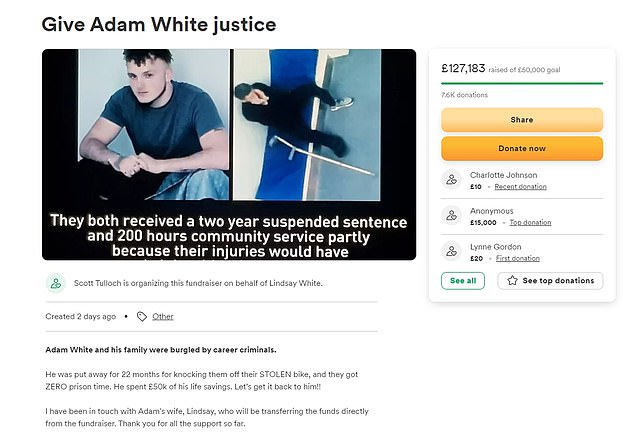 More than £125,000 has been donated for a heroic father-of-two who was imprisoned for intervening when professional criminals attempted to get into his house.

After running the would-be thieves off the road, Adam White, 34, was sentenced in February to 22 months in prison for inflicting severe harm by reckless driving; nevertheless, the criminals were spared jail time.

After hearing about his case on Monday night’s program of 24 Hours in Police Custody on Channel 4, viewers reacted with outrage, calling his conviction “absolutely sickening” while Taylor Benford and Ryan Paul, all 25, got suspended sentences.

Since it was broadcast, Mr. White and his wife Lindsay, 34, have claimed they have been “blown away” by the reaction from the public.

Give Adam White Justice, a GoFundMe campaign created to aid the family, has already collected £127,000 in less than a week.

It happened after Mr. White stated on the program that he had lost his job, spent his “life savings” on legal bills, and that the pair had made the sad choice to end Lindsay’s pregnancy.

Tuesday night, the pair uploaded a video on Twitter in which Mr. White expressed his concern about the blowback after the broadcast of that show.

But I believe it has completely gone bonkers. We simply want to express our gratitude to everyone for their support, which has been absolutely incredible.

He said, “That will help us pay off some of our debt, loans, and credit cards,” in reference to the GoFundMe page.

Thank you so much; maybe we can replenish some of our savings as well.

In a time of financial hardship, Mrs. White said, “I just wanted to say that we are absolutely blow away that people would be ready to give so much, so just thank you.”

Benford and Paul are suing Mr. White for their injuries. Both of them had a long list of prior offenses, including possession of an offensive weapon, theft, reckless driving, criminal damage, stealing, and drug trafficking.

In 2019, the duo tried to break into Mr. White’s house in Leighton Buzzard, Bedfordshire, equipped with a crowbar and bolt cutters.

After acting as purchasers for a motorcycle Mr. White had listed for sale online, they went after his house where he was with his wife and their two children, ages 10 and eight.

However, Mr. White saw the two masked guys trying to enter the family’s garage and chased them off his property before hopping into his Mercedes 4×4 and pursuing them.

The would-be robbers suffered severe injuries after being flung off a stolen motorcycle when the electrician gave pursuit to them, including a shattered head, bleeding on the brain, and broken bones.

While Mr. White was detained immediately on suspicion of GBH after telling police at the accident site that he had lost control of the car while rounding a corner.

After being transferred to the hospital, Benford and Paul were asked whether they would willingly participate in police station interviews.

When they eventually admitted to trying to break in at Luton Crown Court, they were handed suspended sentences and 200 hours of community service.

In September after being released from prison in February, Mr. White is now sporting an ankle tag.

Mr. White, who was sentenced to prison despite having no past convictions, said: “That night is like a recurrent nightmare; it still hasn’t finished.” I continue to see myself as a victim.

It’s not my fault, but I feel like I’ve been treated like a criminal. Although I’m sorry these men were wounded, I don’t think it was my responsibility. It wasn’t caused by me.

Community, friends and family, and coworkers are all wholly empathetic. They all said that they most likely would have followed my lead.

“If someone commits a crime and keeps doing it, whether it’s stealing or injuring others, they should be punished for it,” the saying goes.

“I do believe the system is quite lax, and there is no disincentive; they simply keep doing crimes, and what can you do?” Nothing is possible for you to accomplish.

Following the broadcast, several viewers said that their “blood was boiling,” and in response to the ensuing outrage, Bedfordshire Police issued a statement outlining their involvement in the case.

One individual who gave the impression of being a police officer commented, “Tonight’s 24 Hours in Police Custody has got my blood boiling.” I like my profession, but when I see results like that, I question its purpose. Are we down? Are a *career* criminal’s* comforts more valuable than the rights and privileges of society as a whole?

Can’t understand how charging the burglary victim by the CPS could possibly be in the public interest, another viewer said.

A third wrote: “That 24 Hours in Police Custody show has enraged me.” The legal system is a complete farce.

It was difficult to watch this on television, and with all the messages I’ve received having been amazing and very emotional, I honestly can’t believe the public is behind me, the father of two wrote in an emotional tweet after receiving an outpouring of support: “Thank you to everyone for your kind words and heartfelt sympathy. We have been through an awful lot.”

“This is unbelievable, the support from everyone,” he said. It really crushes my heart to learn that some folks have created a GoFundMe page, as my wife just informed me.

I’m speechless, but thank you everyone from the bottom of my heart.

In a statement after the incident, Bedfordshire Police said that it was “an vital reminder that individuals must not take the law into their own hands.”

The police department declared: “24 Hours in Police Custody’s show tonight will have surely divided views on police work and the criminal justice system as a whole.

Once this has been established, the police must create an evidentiary case to present to the CPS for evaluation of whether there is enough evidence and where the public interest rests.

Taylor Benford, Ryan Paul, and Adam White all entered guilty pleas for the attempted robbery, but Adam White was also found guilty by a jury.

In tonight’s episode, the judge sentenced White to 22 months in prison after taking into account the evidence and the circumstances surrounding the criminal offenses, while also giving Benford and Paul a suspended sentence because they both shared a significant amount of responsibility for their injuries.

“Our police put forth a tremendous amount of effort to bring offenders before the courts and stop their operations, but we are aware that the results obtained are not always accurate.”

‘There were no winners in this case.

This incident serves as a crucial lesson that individuals shouldn’t impose their own laws. Huge repercussions may result from such activities.