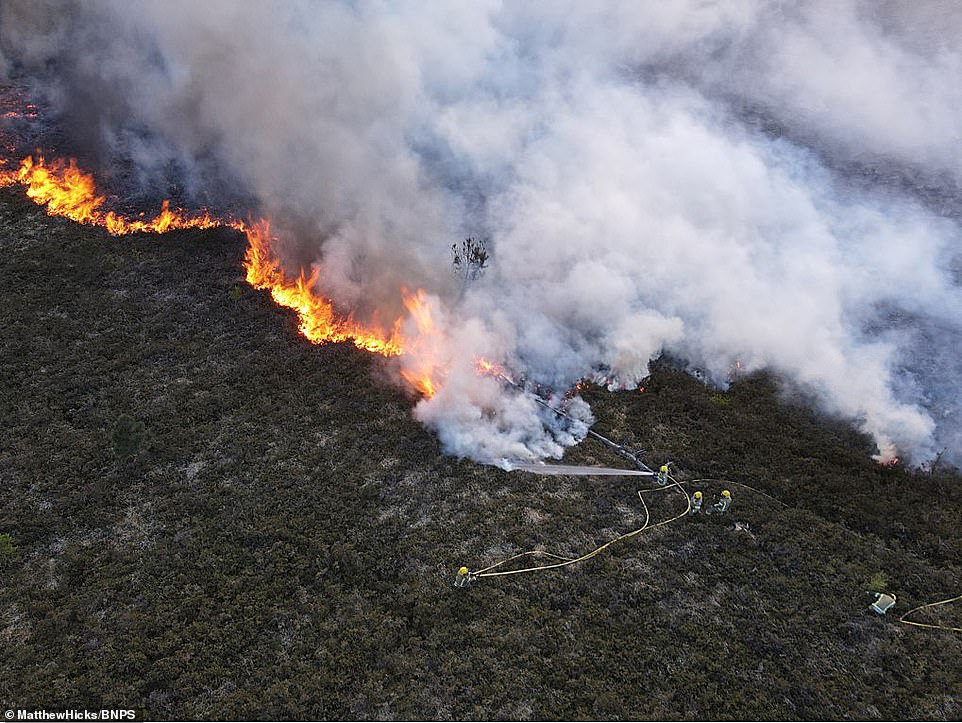 A 330-yard wall of flame was seen ploughing through the picturesque heathland, while people living in homes nearby were evacuated.

Dramatic images from the scene show fire crews dealing with the flames while smoke pours into the sky.

Crowds of people living near to the heathland gathered to see the flames, as firefighters fought for hours to get it under control.

Dorset and Wiltshire Fire and Rescue Service said it took crews from across three counties to get the fire under control by 10pm last night.

Aerial photos from this morning revealed the charred remains of the heathland while also showing it was metres away from people’s homes.

Elizabeth Leddy, 28, from Poole, told the PA news agency: ‘The amount of smoke pluming out was like no Heath fire I’ve seen before.’

In a tweet late on Saturday night, Ferndown Fire Station said: ‘Both our pump and Land Rover were sent to Canford Heath this afternoon for what’s probably the largest fire in this location for a number of years.

Dorset and Wiltshire Fire and Rescue Service and Hampshire & Isle of Wight Fire & Rescue Service tackling the fire at Canford Heath overnight and into this morning.

‘And a big thank you to Red Watch Control who have had a sleepless night answering 168 calls for this one incident!’

Dorset Police has said the cause of the fire is being investigated.