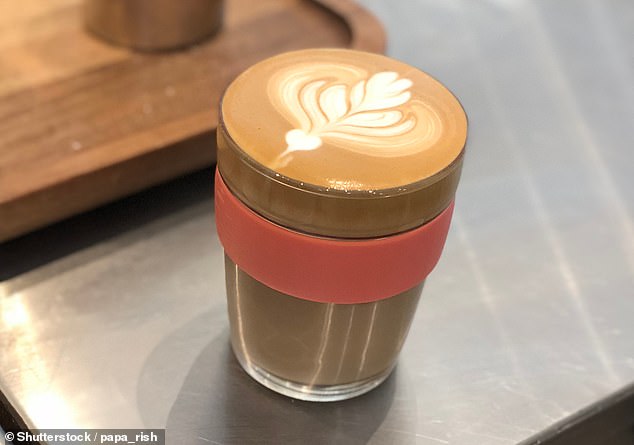 Tomorrow, Waitrose will once again offer complimentary coffee in an effort to reverse the sales decline caused by the rising cost-of-living crisis.

Customers with a myWaitrose loyalty card will be able to receive a complimentary cup of coffee or tea in June 2022, two years after the supermarket discontinued the popular perk during the epidemic.

No minimum purchase is required to receive a complimentary hot beverage at any of the 331 grocery locations.

Customers will be required to bring their own reusable cups to assist the store reduce avoidable trash.

Customers with a myWaitrose card will be able to receive a free cup of coffee at the supermarket if they bring their own reusable mug. Pictured: Illustration of a reusable cup

As inflation rates and food prices in the United Kingdom skyrocket, Waitrose customers are flocking to cheaper competitors, prompting supermarket executives to reintroduce the promotion.

John Lewis Partnership announced in September that Waitrose’s sales decreased by five percent in the six months leading up to June, as an increasing number of its customers shifted to discount supermarkets in an effort to reduce their weekly food spend.

In the first half of 2022, Waitrose’s revenue decreased to £3.6 billion, while its profit decreased by more than £90 million to £432 million.

Tomorrow, the free coffee or tea perk will be offered in all 331 stores across the nation. It comes as managers attempt to combat declining sales.

In 2013, the free coffee offer was made available to all cardholders, including those who had not made a purchase in the store.

However, Waitrose changed its policy in 2017, requiring customers to purchase something before receiving their free drink.

There will be no minimum purchase requirement to receive the discount, and non-myWaitrose members will also be able to purchase beverages, with teas starting at £2.25 and coffees at £2.35.

In 2013, the free coffee offer was made available to all cardholders, including those who had not made a purchase in the store.

As a result of the partnership between the grocery behemoth and the iconic coffee shop chain Caffe Nero, customers will now have access to better coffees than before.

Visitors to the store beginning tomorrow will receive a complimentary Americano, latte, or cappuccino.

Charlotte Di Cello, the commercial director at Waitrose, stated, ‘Our consumers adored the myWaitrose free coffee offer, so we are thrilled to bring it back with exceptional beans from The Nero Roasting Company.

The new agreement between the retail behemoth and Caffè Nero is one of the largest between a supermarket brand and a coffee shop chain.

The collaboration is a perfect fit, allowing customers to enjoy exceptional coffee in-store and at home, with additional perks in the works.

From November 7, the offer will be offered at all 331 of Waitrose’s UK stores, except service stations and garages.

Will Stratton-Morris, chief executive of Caffè Nero UK, which has 650 locations, stated that the combination ‘feels natural,’ with customers of both companies receiving discounts and other benefits.