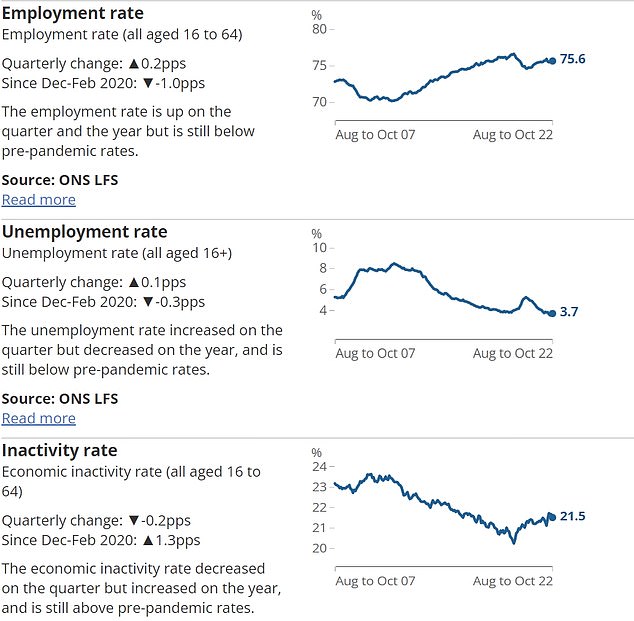 As the cost-of-living crisis bites, wages are plummeting at the quickest rate in the past 13 years, and older workers are returning to the job market.

Taking into account CPI inflation, official data for the quarter ending in October revealed a decline in total salaries of 3.9% annually, notwithstanding the prevalence of strikes throughout the nation.

This was the lowest number since the aftermath of the credit crisis in 2009. In the meantime, the unemployment rate rose to 3.7%, and there are indications that struggling older workers are returning to the job market.

The percentage of economically inactive individuals declined by 0.2 percentage points. The tightness of the labor market is reflected by the minor decline in the number of job openings, although they remain historically high.

With 417,000 days missed, October was also the worst month for industrial action in more than a decade.

The Chancellor of the United Kingdom, Jeremy Hunt, stated that the bleak data demonstrate the need for ‘tough decisions’ and cautioned that demanding astronomical wage raises will just “entrench inflation” and “prolong the misery for everyone.”

In the quarter ending in October, the unemployment rate increased to 3.7%, and there are indications that struggling older people are returning to the job market.

Mr. Hunt stated, “While unemployment in the United Kingdom is near record lows, excessive inflation continues to afflict global economies as we manage the effects of Covid-19 and Putin’s invasion of Ukraine.”

“In order to get the British economy back on track, we have a plan that will help to more than halve inflation next year, but this will necessitate some tough decisions now.” Any measure that risks ingraining high pricing in our economy would simply prolong the suffering for everyone and impede any long-term economic growth prospects.

With job openings at near-record levels, we are devoted to assisting people in regaining employment and assisting those already employed to increase their wages, advance in their careers, and achieve financial independence.

Sam Beckett, the head of economic statistics at the ONS, stated, “This quarter, the proportion of persons who are not working nor seeking for employment decreased, driven by a decline in the number of people of working age who consider themselves to be retired.

This is consistent with previous data indicating that more people in their fifties are considering returning to the workforce at a time when the cost of living is growing substantially.

As more people re-entered the labor force, both the number of employed and those actively seeking employment increased.

‘Even if job openings remain at a very high level, they continue to decline and are currently lower than they were a year ago.

Some strikes were postponed in September for the State Funeral of Her Majesty, but the number of working days lost soared to its highest level in over a decade in October.

The year-over-year decline in regular pay was 3.9%, which was just slightly below the quarterly record of 4.1% recorded in the quarter ending in June.