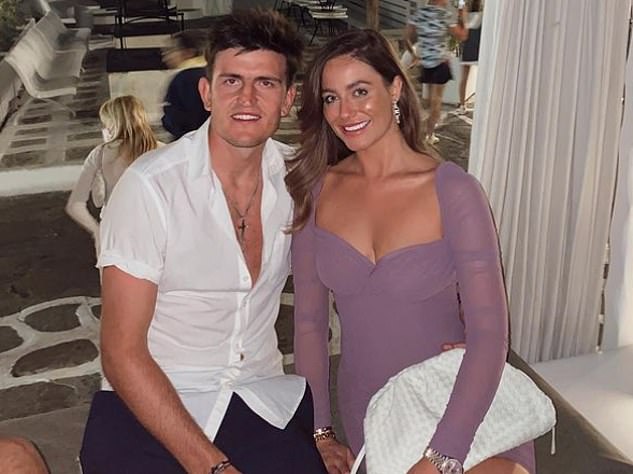 Harry Maguire’s fiancée Fern Hawkins was ‘upset and embarrassed’ when Rebekah Vardy helped stage a paparazzi photo of the England WAGs at the 2018 World Cup in Russia, the High Court has heard.

The claim was aired during today’s £3million ‘Wagatha Christie’ legal showdown, which has seen Rebekah, 40, sue her fellow WAG Coleen Rooney, 36, for libel after she accused her of sharing stories from her private Instagram with The Sun.

The case has already heard evidence about the 2018 paparazzi photo, with bombshell texts between Rebekah and her former agent Caroline Watt said to reveal Rebekah’s key role in setting it up behind her fellow WAGs’ backs.

She had previously denied any part in the posed-up photo, which showed the women gathered outside a restaurant.

In testimony read to the court by Mr Sherborne, Ms Robertson said: ‘Fern did express her upset to me, that she had taken part and she was embarrassed, was prepared and had not expected to be put in that position by Mrs Vardy.’

Messages between Rebekah and Ms Watt on the day in question were handed over to Coleen’s legal team as part of their High Court battle.

The flurry of messages were exchanged between the two women during a day-out in St Petersburg on June 26, in 2018.

The restaurant trip was two days prior to England’s first-round game against Belgium.

At 14:37pm, Rebekah messaged her agent: ‘We may have to walk to restaurant from hotel now… so might be a good pic of us walking down it’s about 10/15 mins away’

Ms Watt replied: ‘Ok will let them know thanks’

At 16.12pm, Rebekah messaged: ‘On the way down in the restaurant car… He’s doing two runs’.

Rebekah then said: ‘If he’s here he is hiding in bushes or behind trees lol’

Half an hour later, however, Rebekah messaged that she is worried the other women will think she has tipped off the photographer after they spot him outside the restaurant.

‘F*** I made everyone go outside for a pic and the pap was there… Looks like I tipped him off now,’ Vardy says.

She said her fellow WAGS wanted her to put her own picture of them on her own Instagram.

‘Girls have asked me to put it on insta so quick get them out… they want me to put it up before the pap puts his in! I’ve bought about 10 mins,’ she wrote.

Posting a picture of the group on one of the WAGS Instagram would render the paparazzi shot less valuable, as it would be freely available to media outlets.