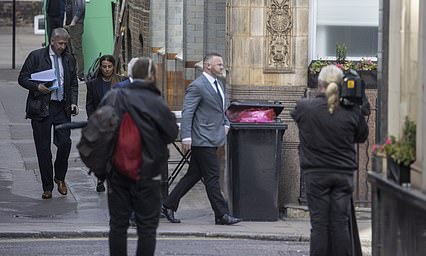 Rebekah Vardy has arrived at the High Court for the second day of her Wagatha Christie showdown against Coleen Rooney – after a string of bitter exchanges at the bombshell opening of the £3million libel case.

Rebekah, 40, is expected to take to the witness stand again this morning after repeatedly denying being a leaker during her yesterday’s testimony, before being confronted about comments she made comparing Peter Andre’s manhood to a ‘chipolata’.

The first day of the ‘libel trial of the century’ certainly did not disappoint, featuring foul-mouthed Whatsapp messages and squabbles about seating arrangements at the 2016 Euros among a raft of vicious claim and counterclaim.

The WAGs have been at war since October 2019 after Coleen, 36, accused Rebekah of leaking ‘false stories’ about her private life, before claiming she had uncovered the culprit after carrying out a social media ‘sting operation’.

Coleen publicly claimed Rebekah shared three fake stories she had posted on her personal Instagram with The Sun, a claim Rebekah vehemently denied – leading her to launch the costly libel action which has finally reached trial.

Yesterday, the High Court heard how Rebekah gave intimate details of a sexual encounter with pop star Peter Andre and mocked the size of his manhood in a kiss-and-tell newspaper interview.

Confronted by Coleen’s lawyer, the WAG said she had been ‘forced’ to take part in the 2004 News Of The World article – in which she compared Andre’s manhood to a ‘chipolata’ – by her ex-husband.

Hitting out afterwards, Andre – who appeared on I’m A Celebrity…Get Me Out Of Here! in 2004 – wrote on Instagram: ‘Do you know how hard it is to keep biting my lip on situations?

‘But the way I look at it, most people saw in the jungle how an acorn turned into an oak so I think I’m ok.’

Outlining Coleen’s defence case yesterday afternoon, her barrister David Sherborne told Mrs Justice Steyn, who is hearing the trial: ‘In essence, this is a detective story, and like any good detective story, you never find a person standing over the body with a smoking gun.’

He said there was ‘inference’, telling Mrs Justice Steyn: ‘You do not have to be convinced beyond reasonable doubt, you just have to conclude that it is more likely than not that Mrs Vardy was responsible, either directly or through Ms (Caroline – Mrs Vardy’s friend and agent) Watt.’

Mr Sherborne continued: ‘If (Rebekah Vardy) gave Ms Watt the gun and the bullets, told her where to target them, told her what was happening and when, that makes her just as responsible as the person who pulled the trigger.

‘To use an analogy, it is like hiring a hitman or woman.’

He said there were, in text message exchanges between Rebekah and Ms Watt, examples of the pair discussing leaking other people’s private information.

He added: ‘Mrs Vardy is just as responsible for leaking information which someone else doesn’t want shared with the press, even if she doesn’t pull the trigger and send it across herself.

Mr Sherborne said there were ‘only two real suspects’ and that any suggestion someone may have hacked into Coleen’s account to access her private information was ‘wild speculation, wild theory, because there is no evidence whatsoever to support it’.

Got it in the can, Wayne? Camera crew follows Rooneys doing ‘staged’ walk after Wagatha Christie libel trial showdown after Coleen signed up for Netflix documentary

The Rooneys were followed by a film crew while doing a ‘staged walk’ after the first day of the Wagatha Christie libel showdown yesterday after Coleen signed up for a Netflix documentary.

Coleen and her former England star husband, Wayne, both 36, were spotted walking down a pavement near the High Court while receiving instructions from a production team and a woman carrying a ‘documentary-style’ camera.

It comes after it emerged Coleen had signed a deal to make a documentary telling her side of the case – which has pitted her against her WAG rival, Rebekah Vardy, 40.

Coleen and her former England star husband, Wayne, both 36, were spotted walking up and down a street near the High Court while being filmed by a camera crew

An onlooker told MailOnline: ‘When Coleen and Wayne came out of court they didn’t get into a car like everyone else does, they walked across the road and down an alleyway.

‘That’s where they all congregated and started laughing and chatting – which was interesting to see after a serious day in court.

‘Then a producer set up a camera on a tripod and started staging them walking up and down the road – it was almost like scripted reality.’

Wayne (middle) was accompanied by his agent, Paul Stretford (left) and members of his wife’s legal team

The barrister said that text exchanges show that Rebekah and her ‘PR, agent and close friend’ worked ‘hand in glove’ together.

Both footballers’ wives sat just feet apart in court, in front of their barristers, with Rebekah wearing a smart navy dress and Coleen , accompanied by her husband, dressed in a black suit with a navy top with a moon boot on her left foot.

Mr Sherborne told the court Coleen was appearing at the trial ‘not because she wants to, she’s here because she has to be’.

‘She’s been brought here because of something she wrote,’ he added. She did not want to have to write it any more than she wants to be here.’

In his written submissions, Mr Sherborne said there had been ‘widespread and significant destruction or loss of evidence’ in the case, which notably include the loss of Ms Watt’s phone in the North Sea.

‘To borrow from Wilde, to lose one significant set of documents may be regarded as a misfortune, to lose two, carelessness, but to lose 10? That must be concealment,’ he wrote.

Mr Sherborne later argued that Coleen had proved her case ‘despite the deliberate destruction of evidence’ by Rebekah and Ms Watt.

The barrister continued in written submissions: ‘Despite the lies of both the claimant and Ms Watt, it is clear, at least on the balance of probabilities, which is all that is necessary, that the leaks arose from the habitual and established practice of the claimant: leaking information about those she knew via Ms Watt to The Sun and others.

‘This was a sustained betrayal of the defendant’s trust.’

However, Rebekah’s barrister, Hugh Tomlinson QC, said the suggestion that Rebekah and Ms Watt were involved in a ‘conspiracy’ and ‘campaign of deletion’ in relation to evidence in the case is ‘completely baseless’.

Earlier yesterday, Mr Tomlinson told the court that it had not been suggested ‘that Mrs Vardy was anywhere near the North Sea at the time’ Ms Watt’s phone fell into the water, nor that she ‘knew anything about it’.

He said there was a ‘credible, ordinary, boring explanation’ behind media files on Rebekah’s WhatsApp no longer being available.

‘It’s a very well-known and common feature in everyone’s life that from time-to-time electronic documents are lost for all kinds of reasons,’ he said, adding: ‘This is something that happens to us all that sometimes documents are lost.’

Mr Tomlinson claimed the issue had affected Coleen too, telling the court that her PR’s email account was deleted in February 2020 and as a result ‘a crucial email about one of the articles has gone’.

Mr Tomlinson also said Rebekah had to bring the libel claim to ‘vindicate her reputation’.

He said in written submissions: ‘The allegation in the post was and remains false: Mrs Vardy had not leaked information about Mrs Rooney or her friends and family to the Sun newspaper from her private Instagram account.

‘Mrs Rooney did not have the ‘irrefutable’ evidence that she claimed to have had: her so-called ‘careful investigation’ was nothing of the sort.

‘If anyone had been leaking information from Mrs Rooney’s private Instagram this was not done with Mrs Vardy’s knowledge or approval.’

The barrister also said that Coleen’s alleged investigation into the leaks ‘was in fact a pre-determined blinkered operation with the aim of ‘outing’ Mrs Vardy’.

Coleen is defending the claim on the basis of truth and public interest.

The fake stories Coleen planted on her Instagram during the sting operation featured her travelling to Mexico for a ‘gender selection’ procedure, her planning to return to TV, and the basement flooding at her home.