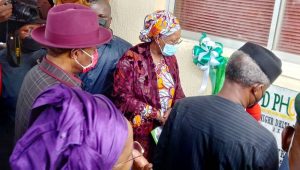 Government House Correspondent, Ejike Abana reports that while commissioning the facility, Vice President Osinbajo commended the excellent work done by Governor Obiano in driving economic development in the state, noting that economy of Nigeria depends on the aggregation of  achievements in the various states.

The Vice President revealed that Anambra state revenue rose from about ten billion naira to twenty six billion under Governor Obiano’s administration and pointed out that the enabling environment and ease of doing business measures introduced by the Governor made it possible, as Anambra people have great entrepreneurial abilities.

While adding that the economy will develop through the small businesses powered by the states, Professor Osinbajo said that since the creation of Anambra state, industrial activities have continued to grow which led to the installation of a one hundred and thirty-two by thirty-three kva in Awka and pointed out that the one being commissioned will serve as an upgrade for the existing one, which will make the airport business more effective.

He congratulated the Governor and good people of Anambra State and assured of seamless partnership between the Federal government and Anambra state in providing enabling environment for businesses to thrive.

In his speech, the Governor  said access to power will support production and export, stressing that the project is timely, as it will provide steady power to the airport as well as industrialists who are driving their businesses with diesel.

The Governor reiterated that his administration has provided seven hundred and thirty transformers across the State in addition to other interventions.

Speaking to the ABS, the Commissioner for Public Utilities and Water Resources Engineer Emeka Ezenwanne lauded Governor Obiano’s intervention in the provision of public utilities in the state and explained that the project will help to complement the efforts of the Anambra State government in the power sector.

Earlier, the Managing Director and Chief Executive Officer of Niger Delta Power Holding Company Ltd, Mr. Chinedu Ugbo, said that the reason for the installation of the substation is as a result of high demand of electricity by Ndi Anambra as the power station will comfortably give twenty four hour power supply to the residents of Anambra state.

The station is one among other five stations being cited in various parts of the state.  Tour of the facility formed the high point of the event.