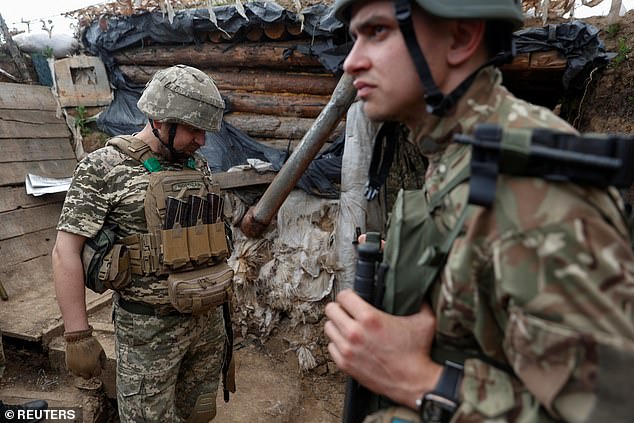 Vladimir Putin is set to declare ‘all-out war’ on Ukraine ‘within days’ to enable Russia to launch a general mobilisation of the population, according to Russian sources and Western officials.

Russian troops entered Ukraine at the end of February in what Putin called a ‘special military operation’ to demilitarise and ‘denazify’ Ukraine and barred the use of the word ‘war’, thinking it would be over in a few weeks.

However, army chiefs – frustrated that the invasion has now stretched into the third week – have called on the Russian president to declare war which would enable a mass mobilisation of Russian troops and an escalation in the conflict.

Britain’s Defence Secretary Ben Wallace said that the Russian president might use Russia’s victory day parade on May 9 to announce the mass mobilisation of his reserves for a final push in Ukraine.

It comes as ex-Nato chief Richard Sherriff warned the West must ‘gear itself up’ for a ‘worst case scenario’ war with Russia in Ukraine.

A Russian military source told the Telegraph: ‘The military are outraged that the blitz on Kyiv has failed.

‘People in the army are seeking payback for failures of the past and they want to go further in Ukraine.’

Earlier this week, the Russian military was said to be furious that Putin had downsized the invasion of Ukraine and called for a new escalation of the conflict.

Speaking on Friday, Mr Wallace said Putin may declare a new war against the world’s ‘Nazis’ at the victory day parade which sees Moscow mark the end of Russia’s involvement in the Second World War.

With Putin’s military having failed in their first wave of military objectives, Moscow has re-focused its efforts on seizing both the east and southern coast of Ukraine.

However, as in the first months of the invasion, Russian forces are being met with heavy Ukrainian resistance from Kyiv’s determined armies.

Some analysts had predicted that Putin wanted to be in a position where he could declare some form of victory on May 9. But with Russia’s victory day parade now less than two weeks away, that is looking less likely.

Instead, Mr Wallace told LBC Radio that Putin could use the occasion to declare a new war on who he would call the world’s Nazis to galvanise his populace in another push against the Ukrainian defenders.

‘I would not be surprised… that he is probably going to declare on May Day that “we are now at war with the world’s Nazis and we need to mass mobilise the Russian people”,’ Mr Wallace said on Friday morning.

While several countries, including the UK, mark VE Day – the anniversary of the allied victory over Nazi Germany in the Second World War – on May 8, Russia marks the data on May 9 due to the time difference.

The end of all combat actions came at 23:01 Central European Time on Tuesday May 8, 1945 – which was already May 9 in Soviet Bloc countries, including in Russia.

Mr Sherriff today said Russia was likely to double down on its approach to Ukraine, insisting to its people that it is the right approach.

He told BBC Radio 4: ‘The worst case is war with Russia. By gearing itself up for the worst case, it is most likely to deter Putin because ultimately Putin respects strength.’

Ukraine’s allies have massively stepped up support for Kyiv as fierce fighting rages in the east, with Kyiv’s generals today saying that Russia is suffering ‘colossal’ casualties in the pivotal battle for Donbas.

Oleksiy Arestovych, a Ukrainian secret service veteran-turned presidential adviser, acknowledged his military is suffering ‘serious losses’ on battlefields in the east but insisted that Russia’s casualties are ‘much, much worse’.

Russia is pouring troops into the battle in Donbass in an effort to force a bloody victory having been defeated in its initial aim to storm in Kyiv, topple the government, and install a puppet regime loyal to Moscow.

After it became apparent they did not have sufficient force to take the capital, Russia’s generals yanked their units out, patched them up as best they could, and then threw them back into the fight in Donbas.

They also adapted their tactics – abandoning precision missile strikes and rapid advances which saw them mauled around Kyiv in favour of slow advances behind walls of blanket artillery in similar tactics to WW1 trench warfare.

The move has been met with mixed success. Ukraine has acknowledged losing control of some towns and villages, but has made gains elsewhere in counter-attacks.

Earlier this week, Putin vowed to use nuclear weapons against any country that dares to ‘interfere’ with Russia’s war in Ukraine.

Mr Wallace said that the UK doesn’t feel ‘rattled’ by Putin’s threats, and instead hailed the NATO alliance of 30 nations ‘who outgun him’.