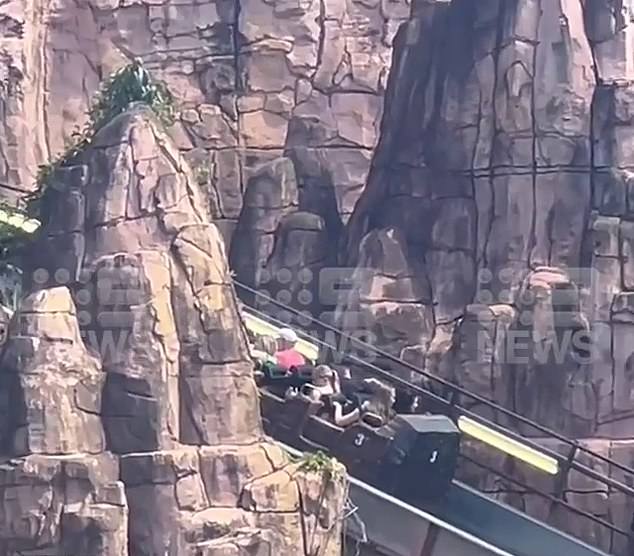 Several guests are stranded on a ride at Movie World just hours after the amusement park was forced to close a number of attractions due to a “fault.”

Thursday afternoon, the Wild West Falls ride stopped abruptly in the midst of the rails.

However, the amusement park informed Daily Mail Australia that the ride had to be shut down due to “guest behavior.”

Thursday, passengers on the West Falls ride became stranded in their carriages due to a problem.

It follows the closure of numerous attractions at the theme park for maintenance.

Village Roadshow Theme Parks operational officer Bikash Randhawa stated, “Our highly-trained operations team has CCTV footage of the entire ride envelope and has identified a guest lowering their child into an exterior portion of the ride perimeter to retrieve a lost item.”

While there was no danger to this passenger, our ride safety procedure requires that the ride be stopped, and our operator did so as instructed.

Mr. Randhawa stated that the ride was halted for twenty minutes.

Green Lantern and Doomsday, two of the Gold Coast amusement park’s other most popular attractions, were forced to close for maintenance on Wednesday, when the tragedy occurred.

A spokeswoman for Village Roadshow Theme Parks stated, “Guest safety is our top priority, and we have a dedicated engineering team that conducts rigorous and thorough inspections on all attractions prior to opening each day.”

‘During Wednesday morning’s engineering checks at Movie World, our team discovered a problem with the Green Lantern and Doomsday attractions that necessitated further conversation with the international ride producers.’

Wednesday’s openings of the Superman Escape and Scooby-Doo rollercoasters were delayed by a few minutes, according to the amusement park.

Both attractions reopened later in the day, although no explanation was given for their temporary closures.

We recognize that these closures can be inconvenient for our guests, and our in-park crew will assist them with their specific experiences,’ stated the post from Movie World.

The safety of our guests is of the utmost importance, and we have a specialized engineering staff that conducts rigorous and thorough inspections on all attractions each day before to opening.

Few rides at Movie World had closed today, and now this. Glad we went weeks ago,’ one woman remarked online.

Another person commented, ‘So practically all the rides are closed today.’

A month has passed since the Doomsday Destroyer malfunctioned, leaving fourteen people hanging upside down.

The Doomsday Destroyer was among the rides that were closed on Wednesday. It is anticipated to reopen later this week.

Guests at the amusement park were left hanging 21 meters in the air for 1 minute and 54 seconds after the ride abruptly stopped.

Those who were fastened to the ride were unable to dismount until four maintenance personnel ran over and cautiously lowered it.

The ride was closed for the remainder of the day, and those affected were given complimentary day passes.

After the ride malfunctioned, employees provided patrons with umbrellas to protect them from the blazing sun while they waited to be evacuated.

A spokeswoman for Village Roadshow Theme Parks informed Daily Mail Australia that the ride was stopped for a usual reason.

A computer detected a probable ride fault and halted the ride.

At that point, our personnel was able to assist customers off the ride, and other rides could resume operation.