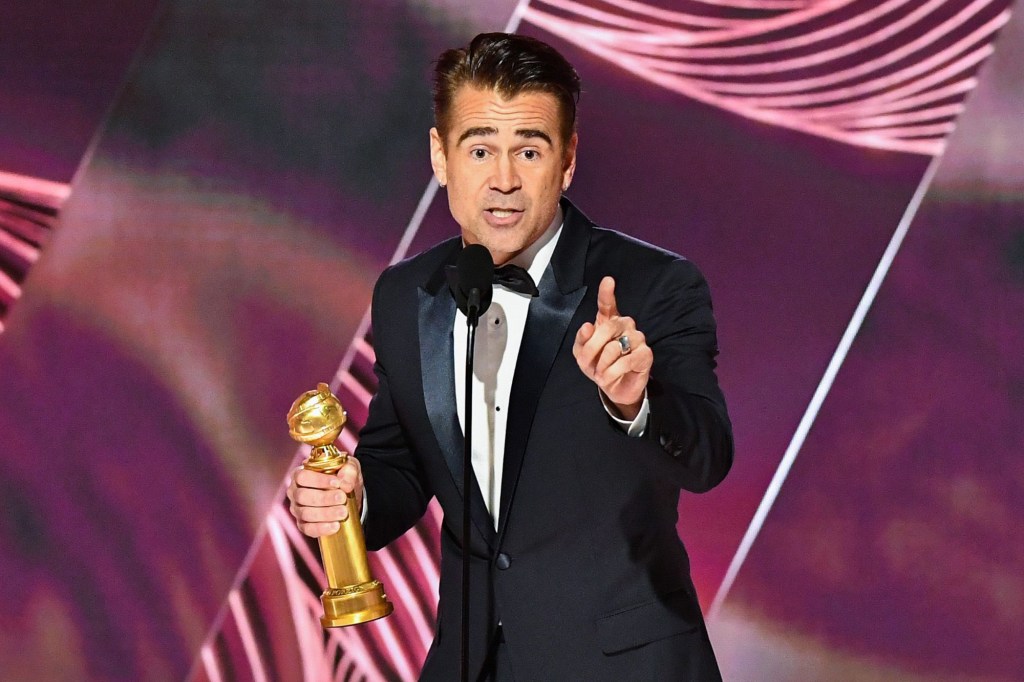 Last night, the Golden Globes returned to television, and many were not pleased, describing the event as “woke” and “boring.”

The awards program returned to NBC after a diversity scandal with the Hollywood Foreign Press Association prevented it from broadcasting the previous year.

NBC abruptly canceled the broadcast of the Golden Globes in 2022, citing the need for “meaningful reform” by the troubled institution.

In his monologue, host Jerrod Carmichael, 35, addressed the controversy surrounding the HFPA and revealed why he thinks he was picked to host: “I am here due to my race.”

“This show, the Golden Globe Awards, did not air last year because the Hollywood Foreign Press Association lacked a single black member until George Floyd’s death,” he explained. “Do what you will with the information provided.

The return of the Globes was intended to symbolize a new beginning; nonetheless, many viewers expressed their dissatisfaction on social media.

Colin Farrell accepting the Golden Globe for Best Actor in a Musical or Comedy for his performance in “The Banshees of Inisherin.”

Many felt that the awards ceremony was “too politically charged.”

One fan wrote, “Congratulations to the boring woke awards #GoldenGlobes.”

“Man, straight out of the gate, the @goldenglobes has reached a new low. Is Hollyweird capable of doing anything without stifling racism and wokeness? “Allow one preacher 10 minutes and the others 20 seconds! Want more time? Just discuss woke stuff.”

“‘Top Gun Maverick’ was robbed of its Golden Globes victory. “Perhaps if Hollywood hadn’t been so concerned with pleasing the woke, it would have been better,” added another.

“Was there a single joke in that opening monologue, or did he simply sprinkle it with woke buzzwords?” “Awful, leave the stage,” someone tweeted.

“The White Lotus” actress Jennifer Coolidge accepts the prize for Best Actress in a Limited or Anthology Series or Television Film.

Others merely viewed it as a snoozefest.

“Okay, this program should not have been broadcast. So monotonous…,” one person wrote.

Another user tweeted, “I’ll just say it: the @goldenglobes is the most boring television awards show I’ve ever seen.”

Someone stated, “Well, that was a very unfunny and dull monologue.”

“This is dull as hell. “It appeared to be a dress rehearsal that no one was paying attention to,” one Twitter user wrote.

“I was eagerly anticipating the @goldenglobes tonight. “Unfortunately, this host and the dull acceptance speeches make for a snooze-fest,” a dissatisfied spectator observed.

Michelle Yeoh accepts the award for Best Actress in a Musical or Comedy Motion Picture for “Everything, Everywhere, All at Once.”

Elsewhere in the night, Carmichael made fun of Tom Cruise and Scientology, Eddie Murphy made fun of Will Smith’s Oscars slap, and Tracy Morgan made a joke about Eddie Murphy’s “weak pullout game” by ridiculing him for having 10 children.

“Abbott Elementary,” “The White Lotus,” and “House of the Dragon” were a few of the most successful television shows. As for cinema, “The Fabelmans” and “The Banshees of Inisherin” were the top winners.