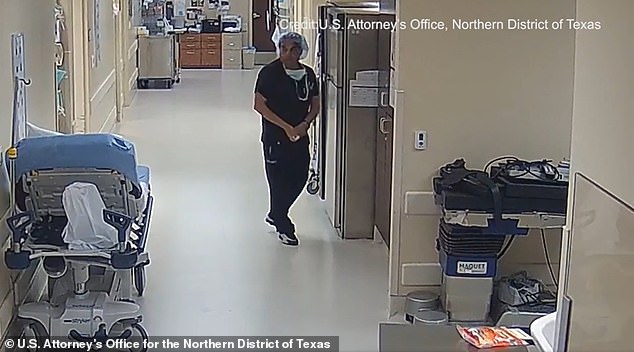 Surveillance tape has shown a Texas doctor who allegedly poured poison into intravenous bags, causing the death of one physician and cardiac emergencies in 11 patients, tampering with the bags.

59-year-old anesthesiologist Raynaldo Ortiz Jr. was arrested on September 15 and charged with tampering with a consumer product resulting in death or serious injury and intentionally adulterating a drug with the knowledge that it would likely result in a negative health reaction, among other charges.

Ortiz is seen on video entering an empty hallway and walking toward a refrigerator used for warming saline solution.

He walks by the refrigerator before returning to place an intravenous bag inside.

Throughout this process, the room is scanned by Ortiz.

The left-behind bag was later administered to a 56-year-old lady undergoing cosmetic surgery, who afterwards had heart issues and was taken to a neighboring hospital.

59-year-old Raynaldo Ortiz Jr. has been accused with tampering with IV bags at Surgicare North Dallas, which resulted in the death of Dr. Melanie Kaspar, 55, and cardiac crises in 11 others.

Ortiz carries an IV bag as he passes the refrigerator and then turns around.

Ortiz studies the corridor before deciding to place the bag in the refrigerator.

The IV bag depicted in Ortiz’s hand was afterwards supplied to a 56-year-old lady who subsequently suffered a cardiac episode.

Ortiz was previously investigated by the institution after past patients who underwent regular surgical procedures experienced difficulties.

A second tape follows Ortiz as he conceals a saline pouch beneath a folder on his arm and deposits it in the refrigerator.

The pouch was subsequently given to a 54-year-old lady who was also experiencing a heart issue.

Dr. Melanie Kaspar, 55, an anesthesiologist at Surgicare North Dallas, died from cardiac arrest after using an IV bag she stole from work to rehydrate. Ortiz was arrested after Dallas police investigated her death.

A subsequent toxicology report revealed that her body had the identical medicines as those in the IV bags that Ortiz had handled.

When one anesthetic patient stopped breathing during a routine operation, facility management launched an inquiry into Ortiz, which led to the onset of incidents involving manipulated IV bags.

According to court filings, Ortiz was distressed by the investigation and believed that the hospital was attempting to “crucify” him.

Two days after the investigation commenced, patients began to have unexpected heart abnormalities.

A second footage reveals Ortiz (masked, middle hallway) approaching the refrigerator again, this time with a bag concealed beneath papers in his arm.

This bag was subsequently supplied to a second patient who was also experiencing a cardiac emergency.

Ortiz is facing life in prison or the death penalty for tampering with a consumer product that caused death or serious damage.

One week before to Ortiz’s arrest, the Texas Medical Board suspended his license on the grounds that his “continued practice of medicine poses a continuous threat to the public welfare.”

In addition to reprimanding Ortiz for shooting a neighbor’s dog in 2018, the board alleged he had a history of aggression against women.

In 2016, Ortiz was convicted of animal cruelty and sentenced to 29 days in jail for shooting the dog after the neighbor assisted Ortiz’s ex-girlfriend in obtaining a protective order against him during a domestic violence episode.

The ‘history of violence against women’ alludes to an arrest in 1999 for allegedly beating a spouse and a protective order issued against him by a different girlfriend in 2005.

A week before Ortiz’s arrest, the Texas Medical Board suspended his license, citing Ortiz’s “continued menace to public welfare.”

At least a dozen patients and one physician who suffered as a result of tampered IV bags are associated with Ortiz.

The fluid contains epinephrine, or the hormone adrenaline, as well as bupivacaine and lidocaine, which caused his “heart to beat erratically and his blood pressure to jump to roughly 200/150.”

According to the hospital’s inquiry, the occurrences involving Kaspar and other patients were likely not isolated and were part of a pattern of purposeful adulteration of IV bags used in procedures.

Other cardiovascular occurrences involving potentially tainted IV bags happened on or about July 7, 15, and 18 as well as August 1, 4, 9, and 19 according to court records.

It was also discovered that when Ortiz was on vacation between July 23 and July 28, there were no cardiac episodes; nevertheless, after his return, the number of cardiac incidents increased dramatically.

55-year-old Kaspar took one IV bag from work to rehydrate.

Kaspar (on the right) is regarded as a ‘lover’ who embraced life to the fullest.

A former coworker remarked, “She was the most sympathetic anesthesiologist and co-worker I have ever met.”

Kaspar was characterized in her obituary as a ‘lovely’ individual who always lived life to the utmost.

There are no sufficient words to describe Mel. She was a whirling dervish who never did anything halfway, according to her obituary.

Melanie was a woman of honor and integrity. She was authentic and unashamedly herself. She had a unique sense of style.

Numerous tributes in another obituary characterized her as a devoted and kind physician who was always able to put patients at rest.

A former colleague stated, “She was the most caring anesthesiologist and co-worker. She loved her work and touched so many lives throughout her tenure in the operating room.”

Ortiz risks life in prison and the potential of the death penalty if proven guilty.