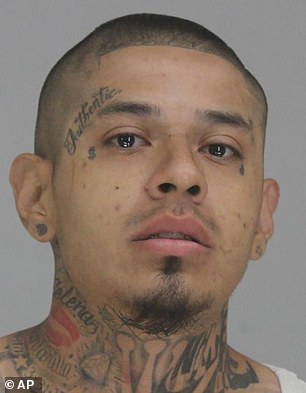 Police in Dallas have revealed frightening footage of a recent hospital shooting that resulted in the deaths of two healthcare workers. According to police, a guy on parole opened fire in a jealous rage just after his girlfriend gave birth.

In the October 22 shooting, Jacqueline Pokuaa, a 45-year-old social worker, and Katie Annette Flowers, a 63-year-old nurse, were slain before Hernandez was wounded in the leg by responding police and arrested.

The horrifying footage depicts chaotic circumstances as two ladies are shot consecutively at the entrance to the delivery room, where Hernandez locked himself with his girlfriend and their newborn child.

A lady thought to be Hernandez’s girlfriend yells and sobs as she begs him not to harm their child, pleading “please don’t do this!”

The majority of the clip was captured by the bodycam of Sgt. Robert Rangel of the Methodist Medical System, who was investigating an unrelated incident near the delivery room when two bullets were fired.

Rangel is seen rapidly drawing his weapon and firing a single shot as the gunman carrying a pistol emerges from the room.

Hernandez was reportedly struck in the leg and retreated back into the room with his girlfriend and child, resulting in a tense standoff.

As he waits for backup, the officer can be heard crying out to Hernandez from the door of the delivery room.

Rangel states, “We can resolve this.” Please toss the weapon outside! Throw the firearm outside.

Hernandez responds, “We’re not going to figure this out, y’all have no idea what the f**k is going on!”

As the female continues to lament and scream, Rangel continues to persuade the gunman to throw away his firearm or allow his partner and child to safely exit the room.

As officers assemble around the room, the standoff continues as they command him to toss the weapon out of the room and reveal his hands.

Following an approximately 15-minute standoff, police went in and took Hernandez into arrest, but this portion of the released footage has only audio.

Hernandez, who was on parole from prison, was permitted to wear an ankle monitor while visiting the hospital. Uncertainty surrounds how a paroled felon gained access to a handgun.

Last month, Dallas police chief Eddie Garcia stated at a press conference, “In my perspective, this is a failure of our criminal justice system.” This violent man should not have been placed on ankle monitoring and should have remained incarcerated.

Hernandez is charged with capital murder and aggravated assault against a public worker and is being held at the Dallas County Jail on a $3 million bond.

Garcia stated that Hernandez arrived at the hospital at 10:20 a.m. to visit the woman in labor and then proceeded to attack her repeatedly with a revolver.

WFAA-TV obtained an arrest warrant document stating that Hernandez began striking his girlfriend after accusing her of cheating.

According to the affidavit, Hernandez then began making ‘ominous’ calls and sending text messages to his family, telling his girlfriend that they were both going to die and stating that ‘anyone comes into this room is going to die with us’

Hospital police The chief stated that Sgt. Robert Rangel witnessed Flowers being shot, asked for backup, and took cover outside the room where Hernandez was reloading his revolver. Garcia stated that when Hernandez emerged, Rangel shot him in the leg, and after a standoff, police arrested him.

Garcia stated that the woman struck by Hernandez was treated for her injuries and that a newborn baby in the room was unharmed.

Amanda Hernandez, a spokesman for the Texas Department of Criminal Justice, stated that Hernandez was released from jail on parole after being convicted of aggravated robbery in October. She stated that he was permitted to accompany his “significant other” to the hospital for the delivery.

Authorities have not disclosed how Hernandez obtained a firearm while on parole for a felony conviction.

Monday, Methodist Medical System Police Chief Glen Fowler stated that the hospital was not informed of the patient’s criminal background or that he was wearing an ankle monitor.

Fowler stated that this is not a question that is typically asked of parents. This is a horrifying, out-of-the-ordinary circumstance. I wish we had been informed, but we were not provided with this information prior.’

Garcia stated that Hernandez was given an eight-year sentence for aggravated robbery, of which he served six before being freed on parole last year. He was detained for a parole breach in March 2022 and released to his parole officer in April.

Garcia stated that in June, police in a Dallas suburb caught Hernandez for another parole violation. He was then brought to a county jail and turned over to Texas prisons, which released him in September with the ankle monitor he was wearing during the shooting.

Nestor Hernandez has been arrested multiple times in Dallas County since 2011, including on accusations of aggravated robbery, burglary, and felon-in-possession-of-a-firearm.