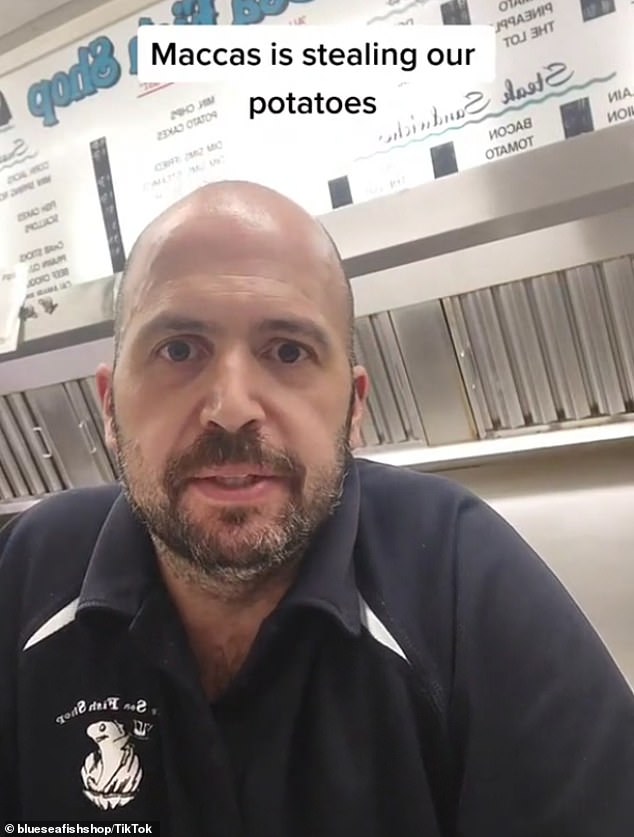 A furious fish and chip shop owner has criticized McDonald’s for its new potato scallop promotion, claiming the fast food giant of pushing small businesses to the edge of extinction amid a worldwide potato scarcity.

Wednesday, McDonald’s introduced its controversially named potato cake with chicken salt, but Chris Dimopoulous, proprietor of a regional fish and chip restaurant in Victoria, claimed there was a larger issue at hand.

Mr. Dimopoulous stated that the new menu item could force his Castlemaine restaurant, located two hours north of Melbourne, and other Australian eateries out of business.

Australia’s potato crop for the season has been severely damaged by floods and drought, with tiny retailers already implementing ‘rations’ to ensure there is enough for everyone.

Potato prices have skyrocketed due to a lack of supply, and now fish and chip restaurants have to compete with McDonald’s for the rare crop.

Mr. Dimopoulous said in a video on Thursday, ‘I suppose it’s a bit of a marketing technique, but for me, it’s about where these potatoes are coming from.’

Every fish market I’m familiar with in the area is struggling to obtain chips, potatoes, and potato cakes.

Mr. Dimopoulous stated that small stores have already experienced cabbage, dim sim, and lettuce shortages and have been forced to hike prices and absorb additional costs as a result of growing inflation.

During a nationwide potato scarcity, Mr. Dimopoulous’s (above) store and other small retailers have had difficulty acquiring potatoes.

Now that we have a chip scarcity, McDonald’s is releasing potato cakes, he stated.

They are stealing all of the potato cakes!

They are stealing all of the potatoes that we use to make french fries.

If they sell 170,000 potato cakes a day across all of their stores, there are no potatoes left for the (family-owned) stores.

Mr. Dimopoulous followed up his video with a Friday piece on Melbourne radio station 3AW in which he stated that small shops are “hanging on for dear life.”

If I sell more than my allocation, I won’t receive any more, he explained.

Now that McDonald’s has introduced a potato cake – or potato scallop, whatever they want to call it – there are not enough to go around.

Mr. Dimopoulous stated that his shop prepares its own potato scallops (above) but is failing to meet ‘rations’ due to the shortages.

We create our own potato cakes from scratch, which has become increasingly difficult.

McDonald’s replied to Mr. Dimopoulous’ disappointment by announcing that the potato scallop will only be available for a limited time as a summer menu item.

McDonald’s has supported Australian farmers for more than 50 years, according to a statement.

We prefer to use local ingredients whenever feasible, including Australian potatoes for our famed fries and hash browns.

Our potato scallops are produced in Australia using Australian ingredients. In time for the introduction of our summer menu, we worked with our suppliers to secure products in advance of the present shortag