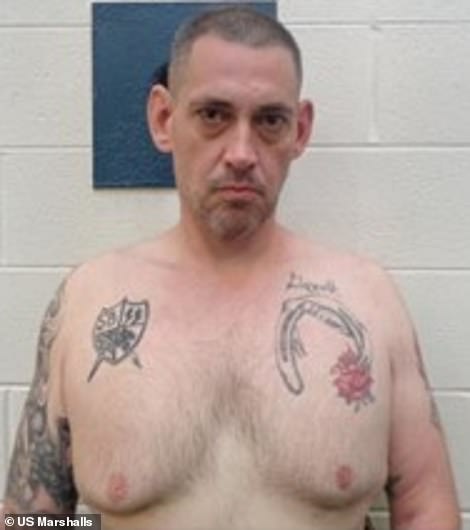 On-the-run prison lovers Vicky and Casey White abandoned their orange SUV in Tennessee, hours after breaking out of jail, before the country realized they were missing, sheriffs admitted on Friday.

She was supposed to be taking him to court but instead, they drove away from the jail in a police vehicle. They then switched to Vicky’s orange Ford Edge – which she bought under an alias.

The SUV was found on Friday April 29, just as news of their escape was spreading through America, but it wasn’t reported to police until last night. Police have now confirmed that it was Vicky’s car, and that she and Casey had tried to spray paint it before they dumped it. It remains unclear where they are now.

Inside the car, the sheriff found Vicky’s jail radio, handcuffs and keys.

‘Somebody might have given them a ride -they could have walked and then stolen a vehicle. No one knew they were missing at that time,’ Lauderdale County Rick Singleton said.

‘This was a well thought-out, calculated plan…. we’re sort of at a loss.’

Vicky recently withdrew $90,000 in cash from her bank, the proceeds of the sale of her home, according to police on Friday. New photos have also emerged of Casey’s many tattoos that include a back inking of a Confederate flag and Nazi symbols.

Other photos show what Vicky would look like if she dyed her hair from blonde to brown.

In a message to Vicky, Sheriff Singleton said: ‘If you’re still safe, get out and turn yourself in.’

In light of his escape with Vicky, authorities are also re-opening an investigation into the mysterious death of his ex-girlfriend, Christy Shelton, in 2008.

Casey, 38, was there when Shelton was shot in the chest with a sawed-off shotgun. Her death was ruled a suicide, but her family never believed the story, WAFF reports.

Casey has a history of violence with partners, having shot at his ex-girlfriend during a crime spree in which he killed a dog and held her roommates at gunpoint.

The 2015 incident culminated in the 6ft 9in ‘monster’ being sentenced to 75 years in prison on charges including attempted murder.

The search for Casey and guard Vicky White, 56, is intensifying as Lauderdale County deputies joined forces with the US Marshals, the Secret Service and other agencies to locate the fugitive pair.

The two developed a secret ‘special relationship’ during phone calls while Casey was being held in a different jail.