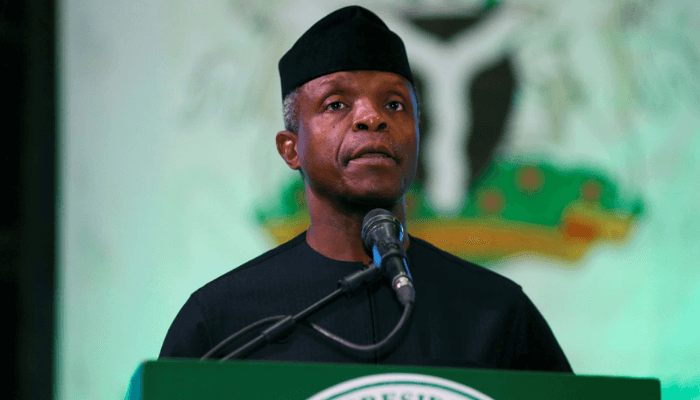 Professor Osinbajo stated this on Monday at the palace of the Deji of Akure, Oba Aladelusi Ogunlade Aladetoyinbo, while on a visit to Ondo State.

The monarch prayed for the Vice President’s success in attaining his objective, noting that, “had it been it were in advanced countries, in all of the APC, nobody would run (for president), they would all just support you.”

Type of Leadership
Speaking on the motivation to run for the office of the President, the Vice President said “as we approach the coming elections, it is a time also for us to reflect on the type of leadership that we want for our country.

“I have served for the past seven years as the Vice President of Nigeria, and I have also acted within that period when the President was away. I think that I am fortunate, and we are fortunate to have been given tremendous opportunities to serve, also even when I acted (as President).

“In that capacity, I am probably the only person trained to be (in that duration), because if you have been a Vice President and also as Acting President, then you have been trained, and I must say with utmost humility – that that is exactly how I feel.”

He said “I feel that with what God has given me within the past seven and half years, I must be able to give to my country. “

That is the greatest act of loyalty that one can have for one’s country. Those of us whom God has given some opportunities to serve must be prepared to offer that service whenever we are called upon to do so.

“Which is why I declared my intention to run for the President of the Federal Republic of Nigeria. And I want to say that I am grateful to God; and I am grateful to you for all your support, advice and counseling in the past.”

The Vice President spoke earlier during a meeting in Akure  with the Ondo State Governor Arakunrin Rotimi Akeredolu, members of the State House of Assembly, State Executive Council members and the APC leaders in Ondo State.

Professor Osinbajo noted that he was privileged to serve in different capacities, and undertake major responsibilities as VP and Acting President because of President Muhammadu Buhari’s generosity and open-mindedness towards him.

“In those capacities as VP and acting president in particular, I got to know so many things that many people would never have ever have come across, and I gained a lot of experience on that account. Now, the opportunity has come,” Professor Osinbajo stated.

According to the VP, it would be a disservice to the nation not to utilise the wealth of experience he has garnered over the years to further serve the nation in the highest capacity.

“With the experience I have, with all the contacts and connections that I have made, nationally and internationally, I think that it would be a betrayal to our country, to our nation… with all that has been given to me by the grace of God, with all of my experience, to say that, oh, I will now retire quietly either to Lagos or Ikenne, and go and be writing my memoirs; it would be a grave injustice to our country.

Transparency
“That is why I decided to pour my heart into it, and ensure that I make up this case for the position of president of the Federal Republic of Nigeria. And I believe that with God helping, if God gives us the opportunity, and the will of the people also, that will be the case, God will make it happen; I will have the opportunity to give this nation the very best that I can give, with all of our hearts, in everything that we can, with sincerity, openness and transparency. That is the desire of my heart.”

While welcoming the VP, Governor Akeredolu recalled that the emergence of Professor Osinbajo in 2014 as APC Vice Presidential candidate was purely a divine thing, explaining that it was God who ultimately decides who gets what position. He disclosed that the VP and himself had been friends and colleagues for a long while before politics.

At the Palace, the Deji of Akure, Oba Aladelusi Ogunlade Aladetoyinbo, extolled the qualities of the VP noting that “we love you and appreciate you and whatever you do, we support you.”

“In whatever you do, we wish you good luck. God will continue to strengthen you; your going and coming would be by the mercy of God. We appreciate you for coming.”

Yoruba Leader
While in the State, the Vice President also paid a visit to one of Afenifere’s respected leaders, Pa Reuben Fasoranti, where he received the blessings of the revered Yoruba leader for his aspiration to become President of Nigeria.

Pa Fasoranti noted, “I wish the project a success, as you go about, may you continue to find favour with people and at the end of the day, we shall say, congratulations”.

The VP thanked the Yoruba leader for his contributions to the development of the country, noting that “your counsel and guidance have always been extremely useful and treasured by all of us. Those of us in politics and government particularly find your counsel very useful; and we know you have a heart, not just for the Yorubas or the citizens of Ondo State, but for our whole country.”