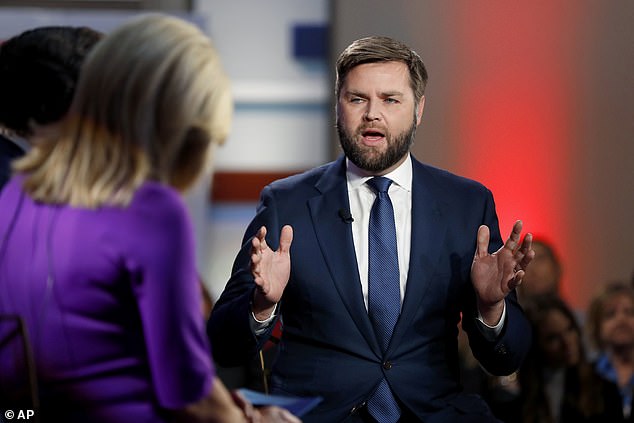 J.D. Vance, a Republican Senate candidate in Ohio, stated that the attack on Paul Pelosi was not’representative of Republicans’ because the attacker was a ‘violent illegal alien.’

Vance branded the hammer attack on the 82-year-old husband of House Speaker Nancy Pelosi ‘disgusting’ and ‘ridiculous’ at a Fox News Channel Ohio town hall on Tuesday night, adding that he condemned it ‘from the very beginning.’

The author of Hillbilly Elegy continued, ‘What I’ve also stated is that I believe turning this into a political issue is a significant concern here.’

The Senate candidate stated, “We must deport violent illegal immigration.”

Vance continued, ‘And when an illegal alien attacks Paul Pelosi, it is awful and terrible, but it does not reflect Republicans; it reflects the fact that we allow too many violent people to live freely in our society.’

‘DePape’s motives could not have been any clearer,’ wrote San Francisco District Attorney Brooke Jenkins in a court filing on Tuesday. He pushed his way into the Pelosi residence with the intent to kidnap and severely hurt the third-in-line for the presidency of the United States. Despite Speaker Pelosi’s absence, the defendant persisted in his mission, culminating in the near-fatal assault on Mr. Pelosi.’

According to the complaint, DePape volunteered at the scene that he was sick of the “falsehoods coming out of Washington, D.C.” This was a suicide mission, but I didn’t want to damage him.

The alleged attacker stated, “I’m not going to stand here and do nothing, even if it costs me my life.”

He threatened to shatter the speaker’s ‘kneecaps’ if she did not provide the ‘facts’ to the police.

Jenkins stated on Monday that it looked the attack was “politically motivated.”

Jenkins remarked, “It’s quite terrible to see that we’ve reached a moment in history where people believe it’s acceptable to express their political views through violence.” It demonstrates that we must calm the situation down. We must decide to be more courteous as a society in the United States.

In front of an audience of Ohio voters, Vance and his opponent for the Senate, Democratic Representative Tim Ryan, participated in a one-hour Fox News town hall special.

Ryan was the first contender to be interviewed by Fox’s Bret Baier and Martha MacCallum, in that order.

During his speech, the Ohio Democrat blasted the attack, particularly some of the responses from prominent Republicans.

Ryan was particularly offended by a tweet from Donald Trump Jr. that included “grandpa-like underwear and a hammer.”

Trump Jr. shared an image of a Twitter user’s “Paul Pelosi Halloween outfit” while stating that “the internet remains unbeaten.”

The Democrat remarked, “That is horrifying.”

Trump Jr. has made multiple campaign appearances with Vance, whom former President Donald Trump endorsed prior to the Ohio GOP primary.

Is this the nation we will bequeath to our children and grandchildren? Ryan asked.