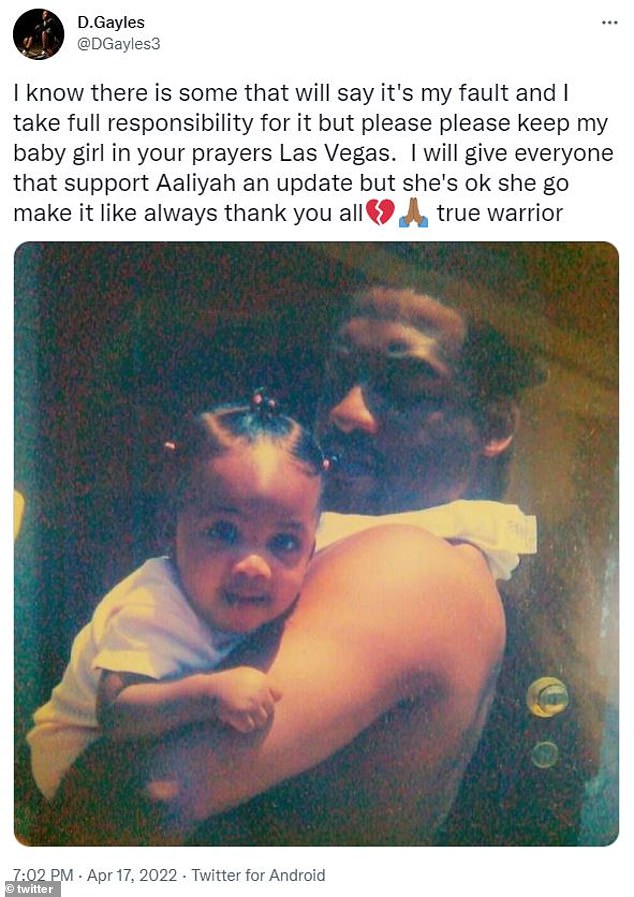 McDonald’s All-American Gayles, 18, and three other people, including two minors, were wounded when a fight broke out during a late-night Easter bash, according to the Las Vegas Review Journal.

The shooting happened at 11:15 p.m. on the 4900 block of Support Street, near Lone Mountain Road and Simmons Street, police told the newspaper.

Nicola Peltz Beckham gives fans an insight into ‘married life’ as she shares shirtless snap of Brooklyn and packs on the PDA after lavish $3.5million Miami wedding, and other top stories from April 18, 2022.

Reports indicate that Gayles’ injuries were the most serious of the four people shot, and she was listed in ‘serious’ condition after suffering multiple gunshot wounds to the lower body, the Review Journal reported.

‘I know there is some that will say it’s my fault and I take full responsibility for it but please please keep my baby girl in your prayers Las Vegas,’ Gayles’ father, Dwight, tweeted. ‘I will give everyone that support Aaliyah an update but she’s ok she go make it like always thank you all, true warrior.’

The top point guard for Spring Valley High School balked at going to USC after the retirement of head coach Mark Trakh, but recommitted to the school when Lindsay Gottlieb was made head coach in August 2021, according to ESPN.

“Aaliyah is one of the strongest, most resilient young people I have ever known,” Gottlieb told the sports network after the shooting. “I have no doubt she will continue to face this unfathomable situation with courage and resolve. We will continue to support her and her parents in every way that we possibly can.”