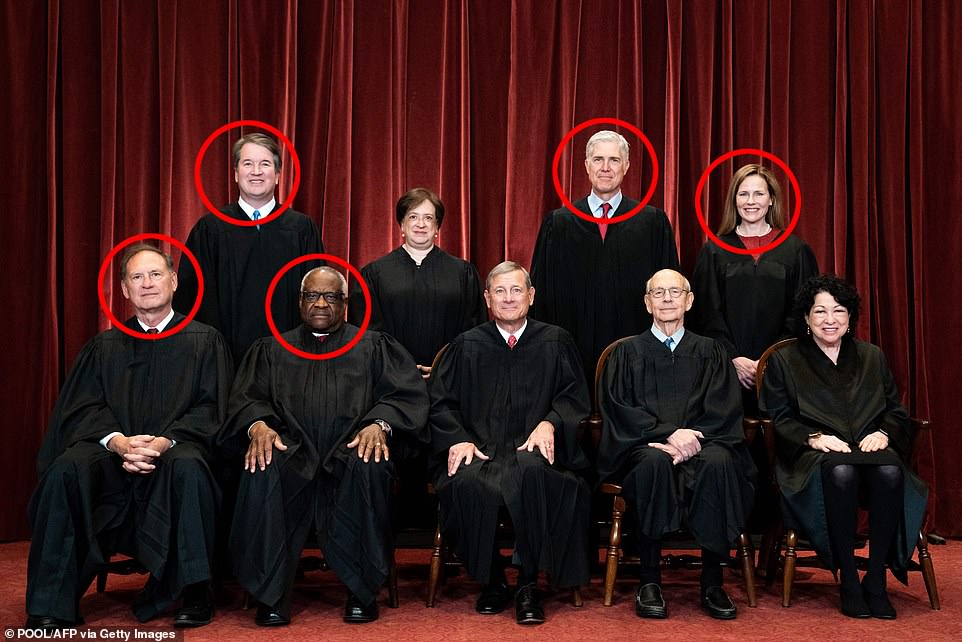 The US Supreme Court looks set to overturn a landmark ruling that effectively legalised abortions across America, handing the power to decide whether or not to permit the procedure back to individual states.

A draft legal opinion, which was leaked to Politico, reveals five Republican-nominated judges – a majority of the court’s nine judges – are in agreement on the issue which would be enough to force a change in the law — though their decision is not final until the ruling is officially published.

US President Joe Biden today said it is a ‘woman’s right to choose’ if she has an abortion as he warned the ‘basic fairness and the stability of our law demand’ the Supreme Court does not overturn the Roe v Wade ruling.

Partisan fighting over the issue began almost immediately after the leak, with Democrats vowing to defend abortion rights while Republican lawmakers demanded a probe into the leak as they denounced it as an attempt to ‘intimidate’ the justices into changing their minds.

Neal Katyal, a former acting US Solicitor General under former President Barack Obama, said: ‘This is the biggest step back for women in decades. It will have proven consequences. You can have now a flat ban on abortion in any state.’

In the leaked document, conservative Justice Samuel Alito writes that Roe v Wade – the 1973 Supreme Court ruling which found that excessive state regulation of abortion is unconstitutional – was ‘egregiously wrong from the start’ and ‘must be overruled’.

Alito, who was nominated to the court in 2006 by George W Bush, argues that Roe’s ‘reasoning was exceptionally weak, and the decision has had damaging consequences. Far from bringing about a national settlement of the abortion issue, Roe and Casey have enflamed debate and deepened division.’

But there were few signs that the new ruling will do anything to heal those divisions, with protesters gathering outside the court in Washington DC last night.

If the ruling is overturned by the conservative-dominated court – with Republicans having a 6 – 3 majority – it would give individual states the power to decide on whether to ban abortion. The Guttmacher Institute, a pro-choice research group, has said that 26 states are ‘certain or likely’ to ban abortion if Roe v. Wade is overturned.

Abortion rights have been under threat in recent months as Republican-led states move to tighten rules – with some seeking to ban all abortions after six weeks, before many women even know they are pregnant.

These include Arizona, where the Republican Governor in March signed a bill banning abortions after 15 weeks of pregnancy; and Idaho where the governor signed a six-week abortion ban that allows family members of the foetus to sue providers who perform abortions past that point, similar to a Texas law enacted last year.

As it stands in the US, abortion can take place until about 24 weeks into pregnancy – but the exact period varies between states. For example, Texas bans abortion after about six weeks but Florida has a 15-week abortion ban.

Key points emerging from the Roe vs Wade legal opinion